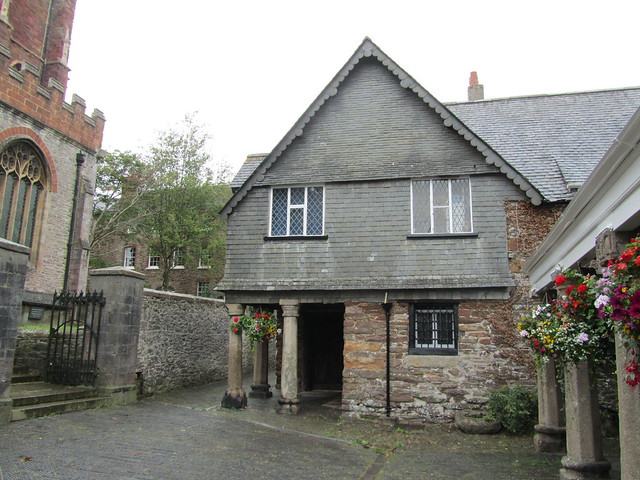 1. A settled and rather unremarkable town, Totnes has recently seen an explosion in creative and alternative lifestyles, setting the town on its current path towards quasi-autonomous sustainability

2. Rob Hopkins, starting in Kinsale, Ireland, went to Totnes in 2005, where he developed and implemented the vision for ‘Transition Town Totnes’, which has become the engine for the Transition Town movement – a socioeconomic localization – that aims to equip communities for the dual challenges of climate change and peak oil, and is now being pursued in over 350 towns worldwide

3. The roll-call of organizations, groups, partnerships and projects seems endless and all the more impressive in this small town, with the Totnes Renewable Energy Supply Company and its associated Totnes Rickshaw Company and Totnes Bio Fuel Company illustrating the fusion of the philosophical, commercial, and practical that characterizes much of the Totnes civic scene and animates Totnes civil society

4. Tourism is an exceptional offer, considering the size of Totnes, with over 200 small shops, cafes, tea shops, and ateliers providing a vibrant buzz and intensity of use in the major streets, contrasted with the calm of new community gardens and pockets of medieval contemplation

5. The town is seeking serious sustainable solutions to global climate change, evident in the panorama of ecological initiatives including demonstrations of social responsibility, learning and public discourse about sustainable living, the installation of photovoltaic panels on public buildings and existing homes, community gardens, local food sourcing, fruit and nut tree planting, local crafts and trade, and a high standard of stewardship of the public realm, which all showcase civic pride and respect for both people and ecology

For over a thousand years the fortunes of Totnes have ebbed and flowed like the tidal river Dart at who’s lowest bridging point it was built around AD 907 by King Edward the Elder. First a fortified Saxon burgh and busy port, then a Norman centre of shipbuilding, fishing, and tanning, its apogee was reached between the 15th and mid 17th Centuries when it was ranked amongst the top twenty wealthiest provincial towns in England on account of its role in the booming trade in woollen cloth and the export of tin.

It was at this time, when the town held three annual fairs and hosted markets for cattle, fish, fruit vegetables, corn, wool, yarn and cloth, that its wealthy merchants rebuilt almost all the town houses on the major street frontages. Bust followed boom however and by 1719 the town council was declared insolvent. For the next two hundred and fifty years the town and its people rubbed along with their neighbours in Dartington and in the suburb of Bridgetown, the latter formerly the rival planted town of Bridgetown Pomeroy across the Dart, enlarged in the 19th Century to offer escape from Totnes’ cramped, medieval slums.

Neither the arrival of the railway in 1848 nor indeed any of the other upheavals of the 19th and early 20th Centuries upset the settled routines of this then unremarkable market town. It was rather the explosion in creative and alternative learning and lifestyles stimulated by the arrival of Dorothy and Leonard Elmhirst at the nearby Dartington Hall in 1925 with their vision of a rural utopia, which appears to have set the town upon its current path towards quasi-autonomous sustainability.

The blossoming of Totnes’ alternative lifestyles in the sixties, with its emphasis on non-nuclear self sufficiency, predisposed a critical mass of the town’s movers and shakers to question and reject the headlong pursuit of consumerism so evident elsewhere and set up local Friends of the Earth groups and “Sustainable Totnes”, supported by the Schumacher College and other centres of learning and reflection on the Dartington Campus. These aspirations were given a particular focus and purposeful boost in 2005 when Rob Hopkins arrived from the eco village in Kinsale, Ireland, and developed the “Energy Descent Action Plan”, providing the vision for “Transition Town Totnes” – now the engine of a movement that in little more than 5 years has given rise to more than 350 Transition Towns worldwide.

Surprisingly, in spite of these significant developments, Totnes today still continues to exhibit the typical historic market town characteristics of traffic congestion, unemployment and low wages. Also typically it has a significant proportion of comfortably off retirees and its corollary – a shortage of affordable housing. In addition though there are a number of small and medium sized enterprises the town’s economy is largely based on tourism and public sector employment, thus many people commute to Exeter and Plymouth and even to London, for work.

Nonetheless the tourism offer is exceptional for such a small town with over 200 small shops, cafes, tea shops and ateliers providing a vibrant “buzz” and intensity of use in the major streets contrasting with the soothing calm of new community gardens and serene pockets of medieval contemplation. The range of produce and products is also striking in its variety and freshness reflecting the diversity of local society, its role as the hub of a rural hinterland of some 15 neighbouring rural parishes and its Fair Trade town status. This vitality and colour extends from Steamer Quay across the Dart in Bridgetown to the Plains opposite Vire Island where old wharf buildings have been converted into new apartments, cafes and a natural health centre. Further south at Baltic Wharf boating and sailing have been revived and a major mixed use development including affordable housing is in prospect. This is but one of a number of sites for new development encompassed by a new Enquiry by Design Master Planning process led by the Town Council supported by South Hams District Council.

Whilst the South Hams District Council provides a benign statutory local government overview, the leadership and governance of Totnes is patently a matter which is handled by the people of the town themselves. The Town Council with a legacy stretching back to the Totnes “Witan” of 1018AD meets in the Guildhall, built in 1553AD on the ruins of a medieval priory founded in 1088AD, and comprises a cross section of Totnes society. However the Council members and the wider population that they represent associate together in numerous other organisations and groups forming a dynamic, rich and varied tapestry of activity and concern which reaches into seemingly every aspect of the town’s affairs.

The roll-call of organisations, groups, partnerships and projects seems endless and all the more impressive as this town’s population numbers little more than 8,000 souls. Typically the Totnes Renewable Energy Supply Company with its associated Totnes Rickshaw Company and Totnes Bio Fuel Company illustrates the fusion of the philosophical, commercial and practical that characterises much of the Totnes civic scene and animates Totnes civil society. Similarly the Totnes Healthy Futures Project is a partnership of Totnes Development Trust, Transition Town Totnes, Leatside Surgery and Plymouth University’s Faculty of Health and Social Work, the aim of which is to integrate local food production, well being and health, horticulture and re-skilling to increase localisation and build communal and individual resilience.

The labels “capital of New Age chic” and “one of the worlds ‘Top Ten Funky Towns’” convey an impression of a place, more superficial showcase than serious settlement seeking sustainable solutions to global challenges; yet it is the latter impression which is the abiding one as you take in the panorama of ecological initiatives, creative examples of mutuality such as the “Totnes Pound”, manifestations of environmental concern, demonstrations of social responsibility and learning and public discourse about sustainable living. In addition extensive installation of photovoltaic panels on public buildings and existing homes, community gardens, local food sourcing, fruit and nut tree planting, local crafts and trades and a high standard of stewardship of the public realm and buildings provide ample evidence of civic pride and respect for people and ecology.

The people of Totnes appear wired for fun and celebration with busy twice-weekly markets, parades, festivals, and performance venues hosting the towns many artistic and cultural societies including the Totnes Early Music Society, Viva – ladies singing group and Wondermentalist’s Cabaret – poets and entertainers collective. Two examples of this excess of cultural richness are the existence of no less than eight art galleries in the town and the fact that over forty different clubs and groups decorate the tree in St Mary’s church at the Christmas Tree Festival.
That Totnes is a work in progress there is no doubt but it is progressing and the journey upon which the citizens of Totnes have embarked may provide the route map for us all to avoid the apocalyptic consequences of global addiction to fossil fuels and the mindless exploitation of the planets other non-renewable resources.