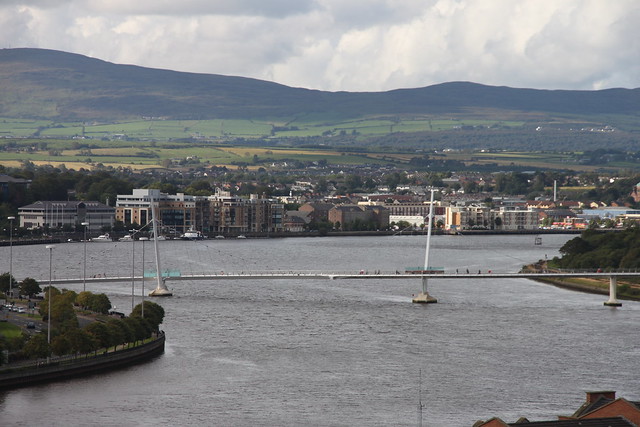 1. Historically derived from a monastic settlement, Derry is laid out in a distinctive grid pattern within defensive city walls (built in the early 17th century), and is now an emerging city stepping into the light of peace and political stability from its darkened past of the ‘Troubles’ that significantly impacted the physical appearance of the city with extensive loss of historic buildings and a weak economy which generated a difficult development context

2. The development context has undergone major changes in the last few decades, with intense community and voluntary sector involvement that has flourished and provided a host of physical interventions, buildings, infrastructure, and creative conservation projects, for example the Chultύrlann Uí Chainán Irish Language Cultural Centre in the Clarendon Street Conservation Area

3. Resulting from the hardship that is borne out of the extreme poverty, human loss, and devastation that the city endured post-war and before and during the Troubles, the city’s unique identity and character has been restored and consolidated within the historic core, displayed in the ways that the buildings and walls have been rebuilt, most notably the Foyle Hospice, which has demonstrated the culture of kindness and caring of the community in Derry

4. Derry~Londonderry is culturally rich and exhibits a range of dynamic arts organizations, several distinctive purpose-built facilities, and the creative alteration and extension of previously at-risk or vacant historic buildings to provide much needed facilities – the city is known for its remarkable clustering of talent, vision, energy and social capital, which is recognized in its designation as the first ever UK City of Culture for 2013

5. City Council has worked hard to collaborate with key partners to deliver a regeneration plan to guide development and attract future investment, involving youth and children in the process, and has been successful in delivering a new shared space scheme in the city to enhance the night time amenities while improving the public realm

Derry-Londonderry is a city located in the North of Northern Ireland whic has a distinctive visual character deriving from its highly visible hilly historic town centre, located at the lowest bridging point at the broad sweep of the River Foyle and the backdrop of the Donegal and Sperrin mountains. Historically the city evolved from a monastic settlement on the rising slopes of a hilly island close to the western riverbank. This hillside was overlain by the distinctive grid pattern plan and defensive city walls built by the London Companies during the early 17th century Ulster Plantation and lengthy periods of relative prosperity and wealth for the merchant classes in the 18th, 19th and early 20th century gave rise to the architecturally rich historic buildings within the Walled City. However, in the mid 20th Century the city’s economy worsened and then through the 1970s and 80s, as the city became embroiled in the death and destruction of ‘The Troubles’, the economy nose-dived.

Now the city is emerging, blinking, into the bright lights of peace and political stability.  In this new dispensation it is all too easy to forget the harrowing reality that was considered ‘normal’ for so many years.  The ‘Troubles’ permeated everyone and everything and had a massive impact on the physical appearance of the city, partly because of the extensive loss of historic buildings, but also because the ‘Troubles’ – combined with the historically weak economy – generated a very difficult development context within the city. This presented extreme difficulty for all statutory agencies and others charged with the daunting task of its regeneration.

The physical effect of the legacy of this difficult development context is evident in historic buildings lost and also the relatively poor design quality of several of the buildings that emerged during the 1970s, 80s and 90s. More recently there are sure signs that the development context is changing for the better. Intense community/voluntary sector energies hard at work below the surface through the 1980s, 90s and into the 21st century have flourished and are now evidenced by a host of physical interventions, buildings, infrastructure and creative conservation projects. Of special note is the highly innovative Chultύrlann Uí ChainánIrish Language Cultural Centre, in the Clarendon Street Conservation Area, although distinctively different from its immediate surroundings it knits into the surrounding historic streetscape and wider roofscape remarkably well.

A growing ease with cultural diversity has seen a shift in perceptions away from an age old fixation with bi-lateral cultural identity to increased acceptance of multi-cultural identity.  This shift is being actively fostered by the work of SEEDs, a non-profit organisation located within the walled city at the Craft Village, which has built on the very strong sense of place and belonging to Derry-Londonderry that people feel. Still tight-knit extended families and communities known for their ready warmth, quick wit and friendliness demonstrate a respect for and commitment to family, and a resilience – that owes much to the hardship that is borne out of the extreme poverty, human loss and devastation that the city endured post war and before and during the Troubles.

One project in the city perhaps more than any others amply demonstrates the keen sense of belonging and respect for people – the Foyle Hospice. In spite of, or perhaps because of, the city’s sufferings this community has evolved a culture of kindness and caring that has supported the creation of an exemplary facility. Since 1986 cross-community fund raising and volunteering has ensured the establishment and endurance of this special place of respite and care for those with life limiting and terminal illnesses.

Today’s new political stability – combined with the town’s successful designation as the first ever UK City of Culture for 2013 and the recent opening of the highly successful pedestrian Peace Bridge – affords major opportunity for change and has injected an energy and buoyancy that ten, twenty, thirty or forty years ago could not have been contemplated.

Indeed Derry City Council have worked continuously with key partners to deliver the  ‘One City, One Plan, One Vote’ Regeneration Plan to guide development and attract future investment. The Regeneration Plan’s vision is ‘a competitive, connected, creative and caring City; aims for a strong, vibrant, forward looking City and City Region that is well connected, attractive to talent and investment and appealing to visitors – a place of diversity, equality and opportunity where all residents enjoy an outstanding quality of life and are given the opportunity to realise their full potential’.

The city has a number of highly appealing qualities that raise the quality of life substantially for those living, working and visiting this small-scale city.  An extensive range of facilities, highly accessible to all, provide for the needs of all age groups and attract long-term residents, incomers and visitors alike. A breadth of retail, leisure and entertainment meets the interests and needs of all age groups, with numerous festivals and activities throughout the year. Health and social provision is good and there is strong community cohesion.

Relative newcomers to the city, young and old, are warmly embraced and before long find themselves bumping into people they know in the street or supermarket, or actively involved in the myriad community/voluntary sector organisations at work above and below the surface of this intriguing and engaging city.

An expanding University campus (30,000 students at present) is retaining students within the wider population and supporting cultural and economic growth.  The 2003 relocation of The University of Ulster’s School of Music from Belfast to its Derry campus at Magee culminated in the creation of a new School of Creative and Performing Arts comprising undergraduate, Masters and PhD courses in music and drama. Reflecting the city’s strong and enduring record of choral activity and festivals including the Foyle Film Festival, City of Derry Guitar Festival, City of Derry Jazz Festival and the annual Festival of Song.

In addition Derry~Londonderry has given birth to, and nurtured the talent  of, a  number of remarkable people from such fields as politics, poetry, drama, literature, journalism, music, community activism, and conflict resolution. The vast majority of these remarkable people still live and work in the city. Others retain strong links and are frequent returning visitors. Visitors and incoming workers familiar with similar sized cities in other parts of the UK comment extremely positively on this remarkable clustering of talent, vision, energy and the evidence of high levels of social capital.

The central core area has strong traditional passive urban design qualities, with active frontages facing the city walls and a living-over-the-shops tradition. Despite the physical devastation of the city’s historic core – not least in the walled city – Derry still retains a substantial proportion of its Georgian, Victorian and Edwardian terraced residential streets.  Many of these are still either in full residential use or have a mix of uses and provide effective self-surveillance.  The opening of the Peace Bridge on the 25th of June, which spans the River Foyle, brings the Waterside into the city centre and with the redevelopment of Ebrington, creates a new shared space in the city which will enhance the evening and night time offer.  Within the town centre recent introduction of a wider range of evening activities, upgrading of the public realm and improved street lighting has improved external self-surveillance on and around the city walls. This has helped redress some emerging difficulties (post Troubles) due to alcohol consumption affecting social use of space in the evenings.  This work is ongoing and multi-faceted.

Derry-Londonderry is the fourth largest settlement on the island of Ireland, with a city population of circa 100,000, and is the centre of economic activity for the north-west region. Infrastructural provision is good, with a City airport, good road links to other Irish population centres and the surrounding region, a University and Further education college training a highly educated young population. It also has port facilities and high capacity transatlantic IT connection. Therefore, there is strong investment in the infrastructure and skills needed to attract international investment.

Traditional local manufacturing and port-related industries no longer exist and are being replaced by financial services, new media and creative industries. These are generating ‘small-scale’ local long-term business development and growth. The City has a vibrant mix of commercial activity, located both within and outside of the City Centre which is commensurate with its role as a Regional City for the NorthWest of Ireland – serving a significant catchment population of c.350,000.

The City has a strong social economy sector delivering a range of functions and services, both in the City Centre and also within neighbourhoods. These social economy enterprises play a significant role within the City’s overall commercial offer within a range of sectors including arts, culture, retail, entertainment and creative arts/technologies.  The City prides itself in having a strong third-level education sector through the presence of the North West Regional College as well as the University of Ulster Magee campus.  Both these institutes actively promote research and innovation within a number of key subject areas, which have culminated in the creation of unique research-led partnerships.

Most parts of the town are accessible of foot and cycle, although some streets are quite steep. Local bus services connect suburbs with the town centre. There are no river boats and the rail service is limited with just one route (there used to be four railway stations serving the whole hinterland). There is high car dependency. Freight is brought either by road, or through the port and then by road. Port and public transport connectivity needs to be improved.

The City could do more to limit the use of non-renewable resources, particularly with the availability of wind power and wave power close by, however this is being addressed now by Northern Ireland government and cross-border agencies. The emphasis in mid-late 20th century has been on car based travel, with a lot of suburban development and peripheral retail. This is expected to rapidly change through enhanced public transport provision, including QBC’s (Quality Bus Corridors).