The Civic Society event was in many ways a model of the Academy’s all-round approach to urbanism, bringing together community organisers, developers, architects, entrepreneurs and researchers. Before hearing presentations from Chelmsford, Cambridge and others – all home to successful but still very much ‘in-progress’ civic projects – Academy Director John Worthington (AoU) introduced the evening with an attempt at a definition:

The civic society, or civic economy, can be thought of as the intermediate zone between the public and private sectors, an alternative to both state-led command and control economies and the minimal state of neoliberalism. Central here is the question of democracy. Again the civic society finds itself balancing between two opposite poles – participative democracy and regulatory democracy.

John suggested that a form of collaborative urbanism based on the ‘civic society’ could be a way of overcoming the barriers we face, particularly in the UK – namely, overly centralised decision making, an adversarial culture and an attitude of dependency. An urban practice like this would focus on relatively small designs but involve large numbers of people, rather than just a handful of professionals; it would be a long term engagement, for example over the period of a decade. 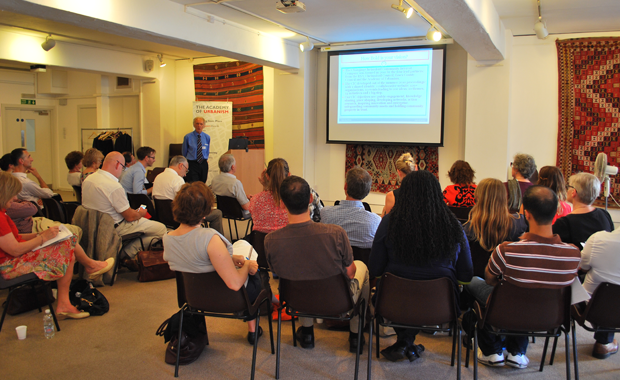 Malcolm Noble from Changing Chelmsford was the first speaker of the evening. Set up when Chelmsford began preparing its bid for city status Changing Chelmsford started with a problem: this economically thriving town carried an image of outward contentment but lacked internal identity.

To address this problem, Changing Chelmsford focused its attention on a handful of neglected heritage landmarks, including the Shire Hall, the Marconi buildings and the Anne Knight Quaker Meeting house, associated with the Genesis Housing association development opposite the station. Following Changing Chelmsford’s initiative Essex County Council has raised £1 million to refurbish the Shire Hall, and although the modernist Marconi buildings were eventually found to be beyond repair, the original 1912 office buildings where Marconi started have been retained.

Running on a shoestring budget, Changing Chelmsford, now coming up to its fifth year has established the annual Ideas Festival in partnership with Anglia Ruskin University, the City Council, and a number of growing initiatives. The Ideas Hub, a pop-up space currently based in the High Chelmer shopping centre, is the organisation’s main base. The Hub has become a meeting place for all kinds of groups and individuals, playing host, for example, to a local arts festival.

From Chelmsford a place that started out ‘cash rich but community poor’, we moved to a place that had both but still faced major challenges. The centre of a huge number of high technology companies, with the university a powerhouse for innovation, Cambridge was under great pressure to expand in the second half of the 20th century. At the same time, there were obviously strong reasons for conservation, in terms of the greenbelt surrounding the city and the historic city centre. As Cambridge began to lose out to competitors in Asia, the result was rising house prices outstripping salaries.

Against this backdrop, Stephen Platt (AoU) from Cambridge Architectural Research (CAR) explained the pro-bono work his practice carried out when it was tasked with surveying the reaction of the public to seven proposed land use options. Putting the ideas across in a clear form involved translating planning language into ordinary language.

When the results were published in a simple, one-sided A3 leaflet, they had a big impact. One surprising result was that there was little support for the status quo – people had a sense that things could not stay the same; if left, they would only get worse. Despite some ‘NIMBYist’ attitudes, there was clear support for growth, and particularly for more and better public transport.

While CAR’s survey intervened at the level of a city-wide policy, our next speaker, Line Algoed from Cospa (a member of the Academy’s Young Urbanist network) introduced a project that functioned more like urban ‘acupuncture’.

Line describes herself as an urban anthropologist and her current work is very much focused on people, specifically young people. In the context of cuts to services and high youth unemployment – particularly among young black men – Cospa’s ‘V.I.Y.’ project (‘Volunteer It Yourself’) provides opportunities for vocational training by bringing together a wide range of private, public and not-for-profit partners, all centred on local youth centres. While youth centres are much maligned by the government’s austerity measures, they remain a vital place of connection for working class youth in the UK’s inner city. As Line put it, they are a way of reaching the hard to reach, and unlike the schools that Cospa also approached, youth centres leapt at the opportunity to be part of the V.I.Y. project.

The idea of the project is to provide the resources for young people to repair their own youth centres. Each partner contributes something to the project and gets something in return. Wickes provided tools and materials, and in return gained potential customers in the form of local tradespeople involved in the project; City and Guilds provided certification for skills learnt and in turn get more people qualifying through their system.

Currently the project is being rolled out in 47 locations, with over 1000 people involved and 200 mentors. As a form of ‘grassroots urbanism’ it goes well beyond consultation, by putting young people at the heart of the regeneration process.

Beyond its immediate, practical impact, the hope is that it acts as a plea to developers to recognise that youth centres are key civic assets. There is also scope for wider application of the principle, for example considering the million empty homes in the UK that are crying out for some form of social enterprise.

Charities and the Urbanism of the Laundrette

Following the presentations, the event opened up to a general round-table discussion. A significant portion of this focused on the role of charities, not-for-profit organisations and the voluntary sector. One question raised was how to get large, established charities to put some of their resources into projects like the ones above. Henk Bouwman (AoU) suggested that this is not just about locating funding sources, but about explaining the benefits of investment. For large organisations, small but adventurous projects like this could be seen as a form of R&D. Catherine Greig (AoU) highlighted the fact that the Charity sector should not be seen as monolithic; strong partnerships are built on the specificity of the interest and the values and concerns of the organisation.

The discussion about the voluntary sector also began to suggest alternative ways of working. Henk described this as a matter of spending time on identifying and engaging with existing needs, initially on a pro-bono basis, focused on identifying realistic initiatives with robust business plans rather than relying solely on competitive public procurement. Catherine recognised this model in her own practice, especially in its early days, but was keen to stress that the work of organisations like hers should not be seen as a voluntary service; young urban practitioners simply cannot afford to work for free in this way. Yogesh Taylor from Changing Chelmsford very much agreed: volunteering in this sense risks becoming a luxury for those who can afford it; this can also devalue the essential work of facilitating and coordinating that is indispensable for voluntary organisations.

Perhaps most interesting though, was the discussion of the kinds of outreach methods that might be involved in this community focused urbanism. Henk and Catherine gave the unlikely example of the laundrette or newsstand owner – someone who makes themselves a point of contact for all kinds of people in their daily lives.

There is clearly scope for new networks and collaborations to develop out of the Academy’s ‘civic’ theme.