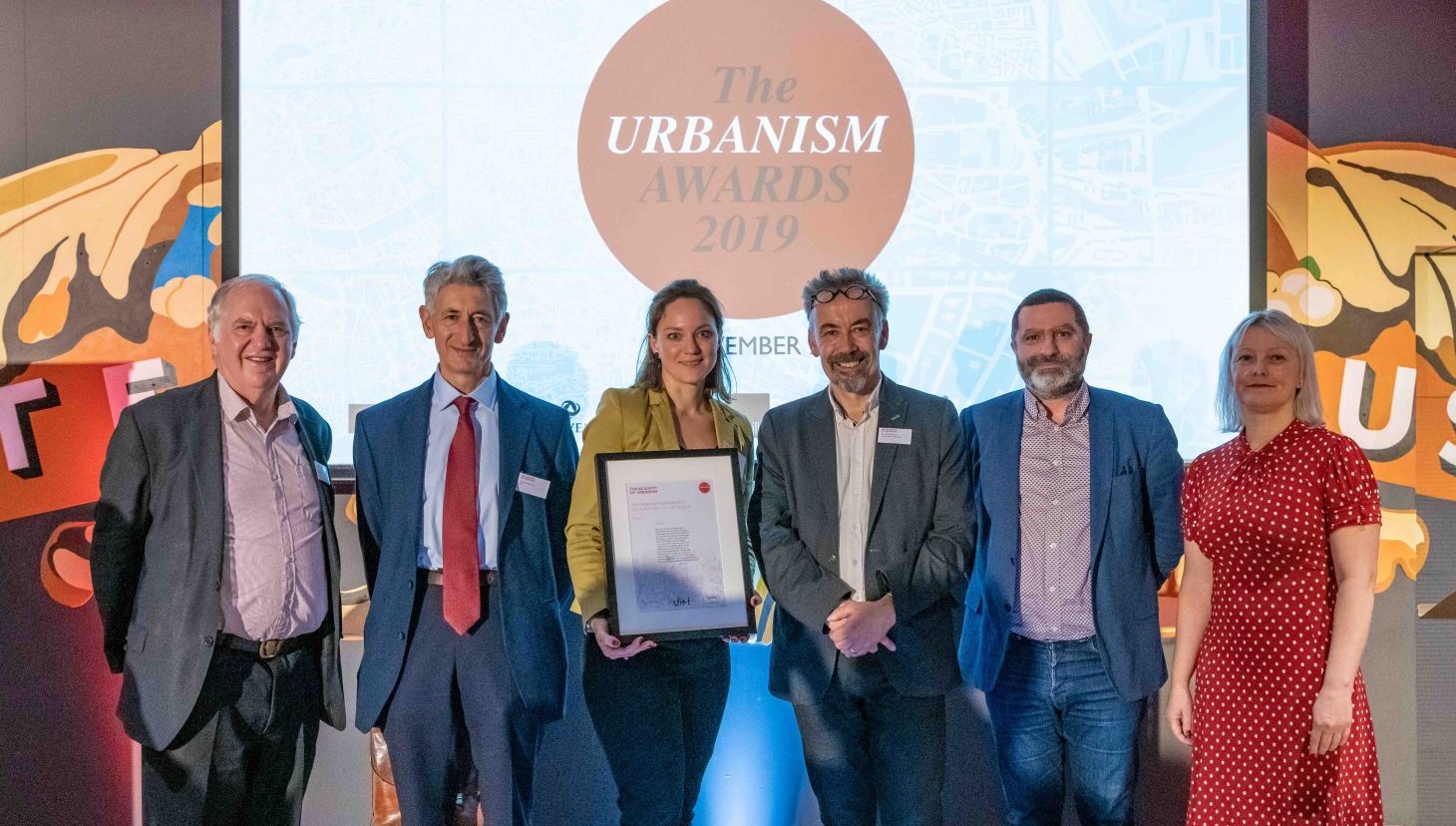 Leipzig has been named European City of the Year at the 2019 Urbanism Awards. The German city fought off strong competition from fellow finalists Nantes and Zurich during a summer of assessment visits and subsequent vote by The Academy of Urbanism. Theresa Kodritsch, a representative of the Department of Urbanism and Construction for City of Leipzig, collected the award which she dedicated to the people of Leipzig.

The award is one of five given out each year by The Academy of Urbanism, a network of built environment experts from across Europe. They recognise Britain and Ireland’s best place, street, neighbourhood and town, as well as Europe’s best city. Voted on by its members, the Academy judges against a number of social, economic and environmental factors, including good governance and commercial success.

The theme of this year’s Urbanism Awards is ‘post-industrial’ – recognising examples that have transformed themselves into thriving places after suffering from the decline of their predominant industry.

David Rudlin AoU, chair of the Academy, said “Leipzig is the sort of city that urbanists dream of; lively streets, sustainable, a fantastic tram system and lots of creative people. Its easy to forget how not long ago the city was run down after the loss of its industry and how dramatic its regeneration has been.” 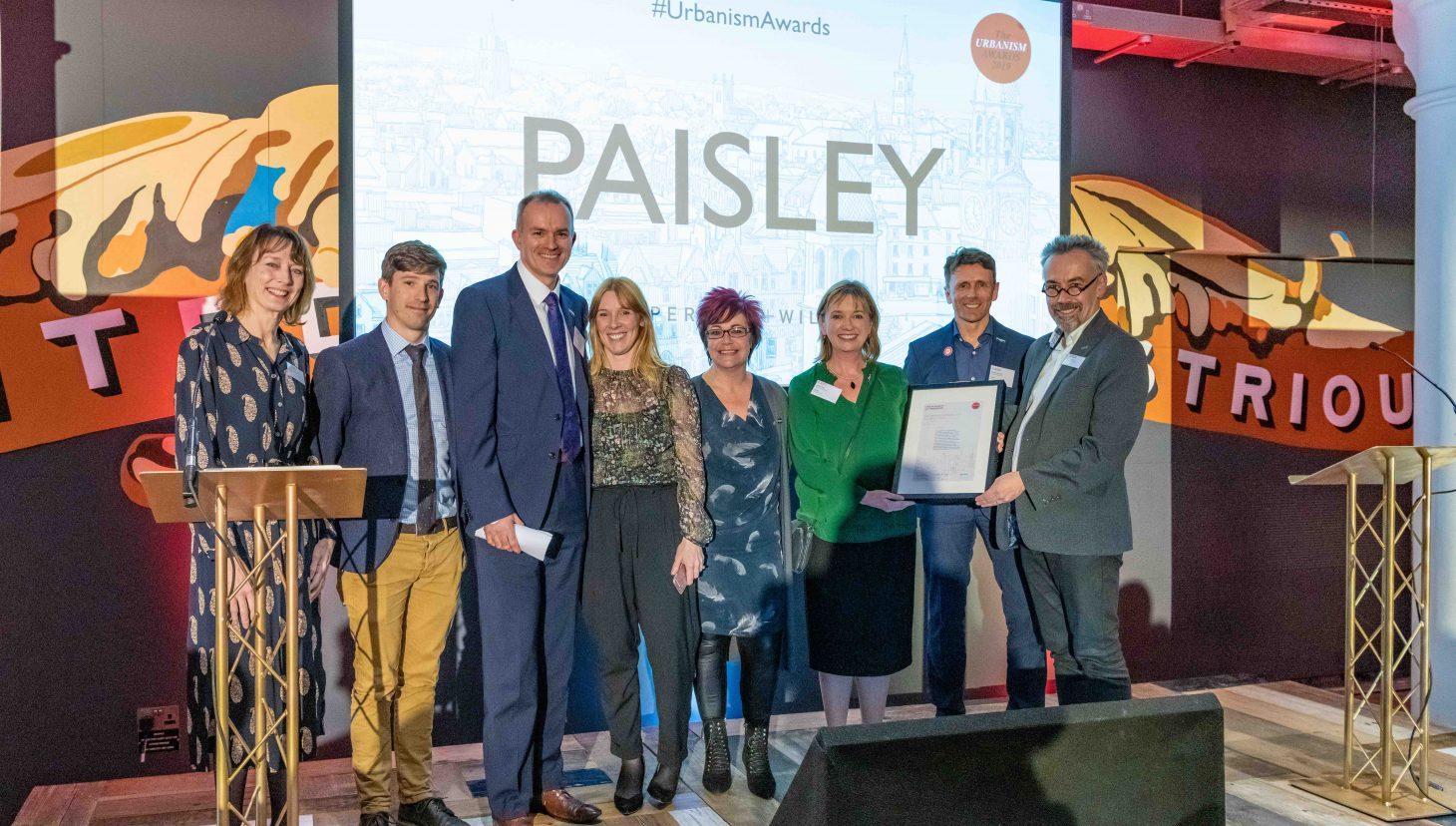 The assessment team credited the Scottish town for using heritage and culture to change the narrative of the town. Michele Grant AoU, lead assessor, noted “Renfrewshire Council’s UK City of Culture bid is an outstanding example of how to shape a collective vision and build community confidence that delivers in the long term. It is enabling innovative heritage and culture projects, bringing investment into the town’s built environment, and bringing together different generations by connecting them with the town’s industrial heritage”. 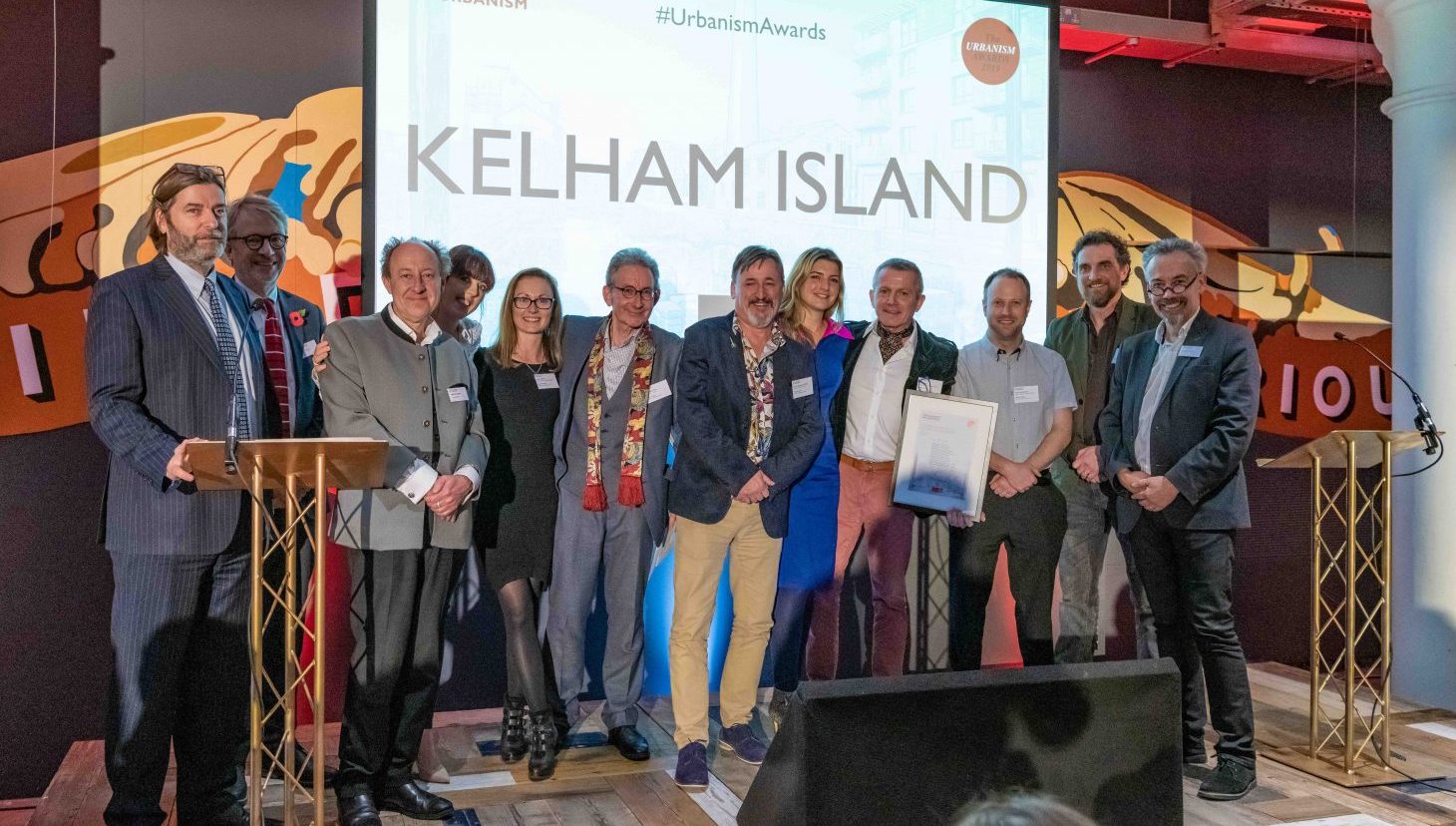 Lead assessor, Tim Challans AoU, commended Kelham Island for its retention and creation of industry. “Local authority intervention has ensured the retention has consisted of some long-standing small scale manufacturing industries and crafts and created opportunities for cultural and creative industries and artist studios to develop alongside these without creating tension” said Challans.

The Great Street Award was won by South William Street in Dublin, ahead of Argyle Street and Kirkgate in Leeds. The Irish street has demonstrated an inherited flexibility and a creative use of the past. “The street has consistently had to reinvent itself and each reinvention has added layers of richness and delight to the street’s special place in Dublin. The small grain of development allows start-up businesses to flourish and the supportive nature of the business community has encouraged growth” stated Alistair Barr AoU, lead assessor. 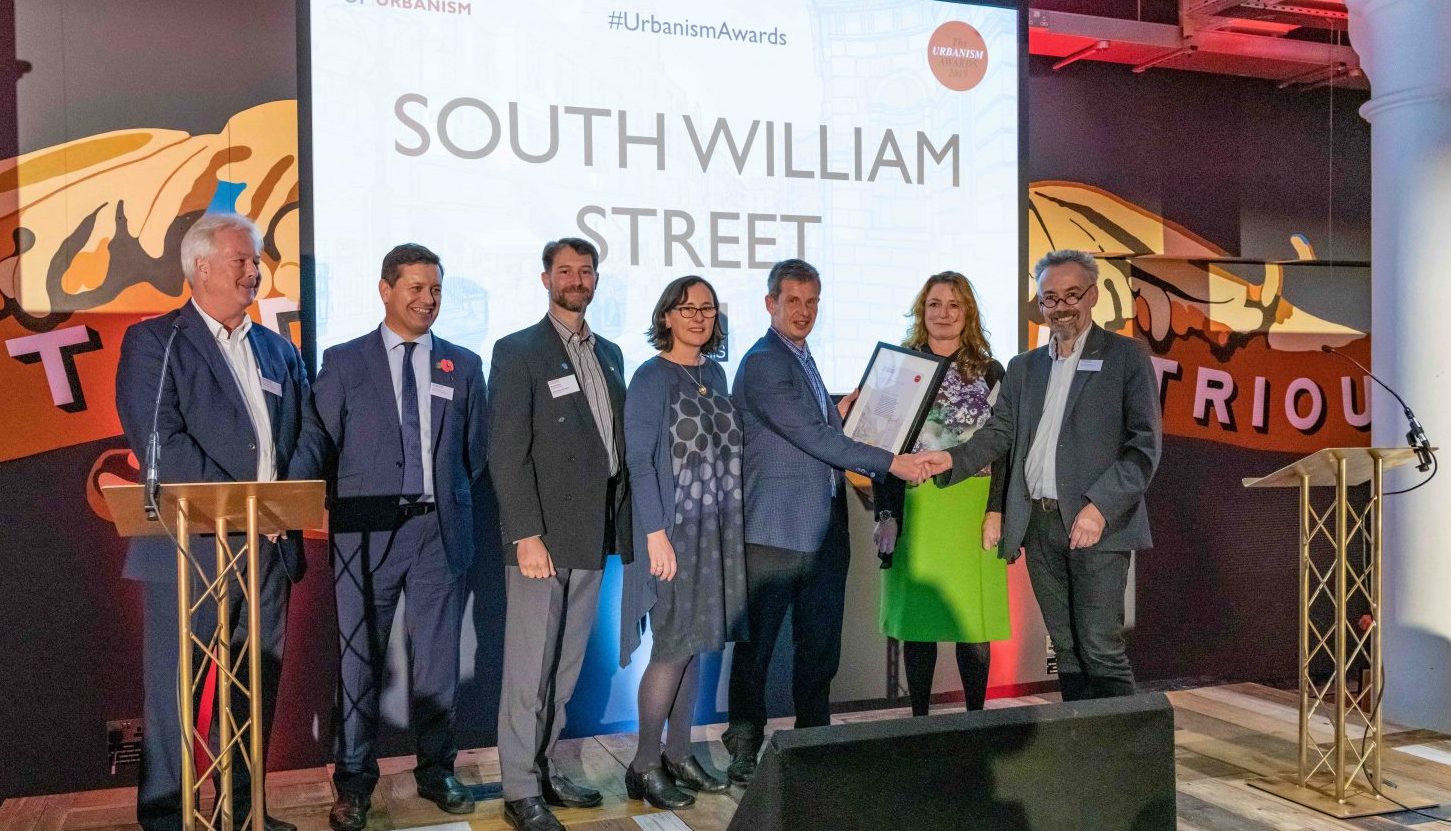 Lastly, Granary Square in Kings Cross, London received The Great Place award, narrowly beating Kilmainham Civic Space in Dublin and Maritime Quarter in Swansea. The Academy judges expressed that the square is an exemplar of a long-term vision and commitment by a developer and investors. 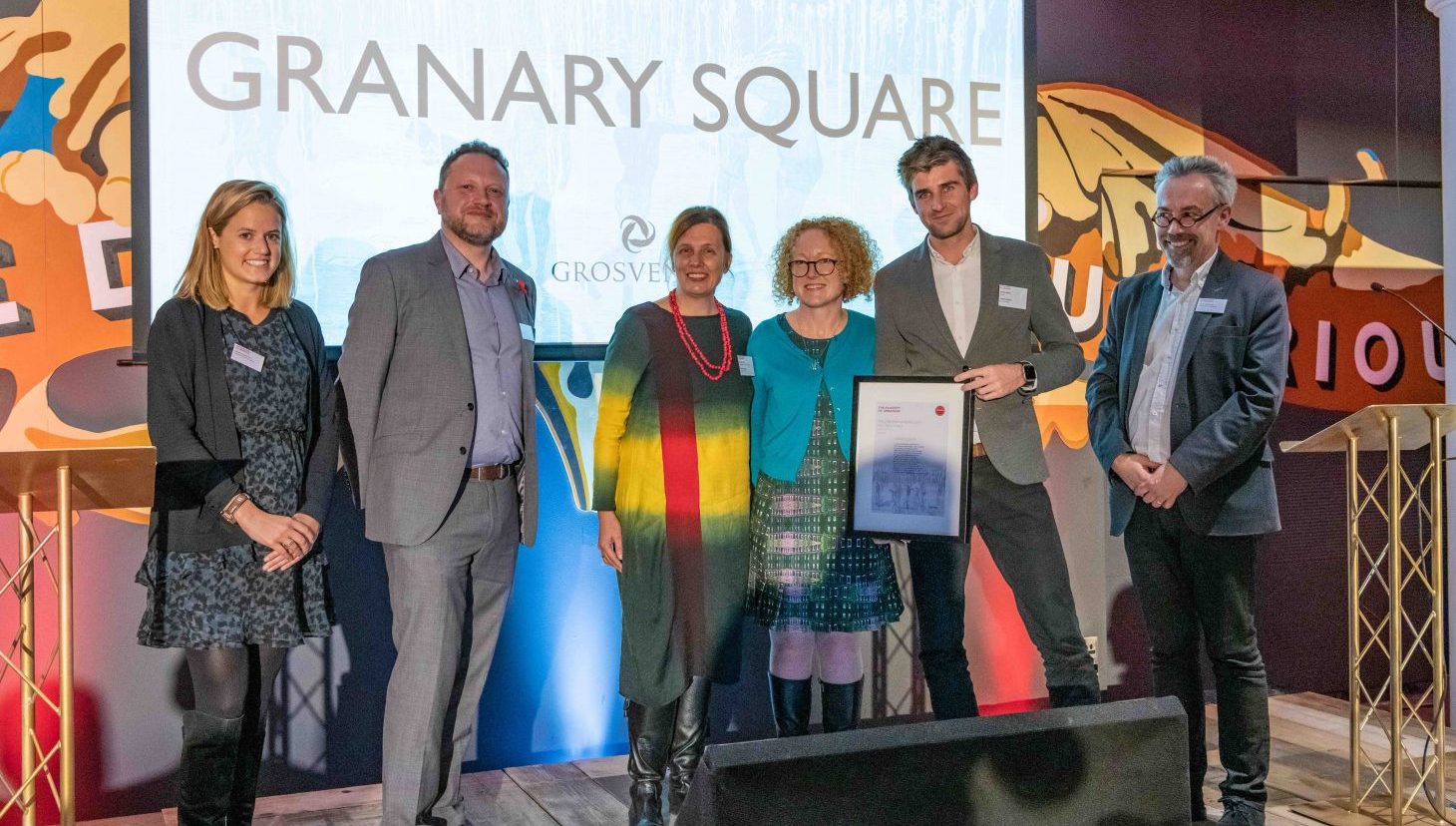 The developers have retained involvement and continue to maintain an on-site presence that greatly influences the management, maintenance and resulting qualities of place. The developers have also been committed to achieving strong environmental credentials including, addressing land contamination arising from 150 years of industrial uses on the site.

The Urbanism Awards were presented at a ceremony in London on 7 November and were sponsored by U+I, Grosvenor, JTP, Perkins+Will and Savills.

It recognises, promotes and learns from great places. For more information about the Academy, visit: www.academyofurbanism.org.uk.