Kralingse Plas – a lake which acts as a buffer for water and offers great recreational facilities / possibilities. Image rights: Municipality of Rotterdam

Rotterdam has always been forward thinking. Mattijs van Ruijven AoU looks at how the municipality turns risk into opportunity to create a vibrant and attractive city.

Rotterdam is a city with its eyes on the future. There has always been an urge to find new ways to stimulate the growth of business, the port, housing and the spatial development of the city. During the 1920s and 1930s, the city demonstrated its forward-thinking ideals with the new Coolsingel central boulevard that provided more space and grandeur and the Van Nelle factory that introduced a spacious and bright working environment. In addition to these – the latter of which is now a Unesco world heritage site – it also experimented with better housing for the working class and use of new building techniques.

The modern rebuilding of the city after the devastating bombing in 1940 was a logical continuation. Over more recent years many initiatives, large and small, and by the government, entrepreneurs, developers or citizens show that this way of thinking has once again been embraced by everyone in the city. This has led to positive media attention, something we are not always used to.

However, Rotterdam still faces major challenges for the future. From an urban development point of view the two most important challenges stated in our 2007 urban vision strategy are maintaining a strong economy and being an attractive city to live in. The strategy states that we need more innovation to deal with these challenges.

The port has always been associated with the city’s economy. But it also has a strong focus on sectors that now have an uncertain future, such as cargo and oil refinery. Adding to this uncertainty is the realisation that the port is becoming more and more automated and as a result the number of jobs it provides is falling. So the challenge for the port is to be innovative, sustainable and competitive in order to retain its position of importance within the global economy. The challenge for the city is to diversify to create other economic and employment opportunities and provide the necessary jobs.

The medical and food sectors already provide a large number of jobs. The maritime cluster, which although related to the port, is broader than just direct shipping activity and has been growing rapidly over the last few years. Interestingly, most of the businesses in this sector are situated not by the port area, but in the inner city. One of the challenges we face is to provide the necessary room for experiments and crossovers between the main emerging economic clusters, whatever their focus. From a spatial point of view we use the thesis that the old economy needs new buildings and the new economy needs old buildings.

The city has long suffered from an image of being an unattractive place to live. However, recent data show that more and more highly educated people are choosing Rotterdam. This may be the case across many of the world’s cities, but in Rotterdam the rise is spectacular. Moving from a position well below the Dutch overall average – for years the authorities focussed only on the lower social class and neglected the middle and higher social class – to that above the Dutch average, is a promising development, leading us to conclude that city’s image is changing. However, despite the promising growth of the maritime cluster, the number of jobs for highly educated people has not yet followed at the same trajectory.

Successful experiments such as ‘do-it-yourself homes’ (cheap run-down housing owned and sold by the municipality or housing corporation with an obligation to invest in the renovation) have over the last few years led to an increase in housing projects suitable for young people and families to live in, especially in the city centre and its surrounding neighbourhoods. But Rotterdam still does not have a balanced population. Therefore compared to most other cities in the world, we see gentrification as a good thing and actively try to support this process.

The city has identified two factors that pose a risk to our economy and, especially, its attractiveness: air pollution and climate change. Air pollution is caused by industrial activity and large vessels in the port, and by traffic in the city. Both should be tackled, but the city has decided to focus on traffic, where the biggest gain for everyday life in central Rotterdam can be made. However, simply reducing traffic in a street or only allowing ‘clean’ cars and trucks into the centre will not bring about the required improvement in air quality. We therefore need a solid and innovative approach to all traffic flows across the whole city network. 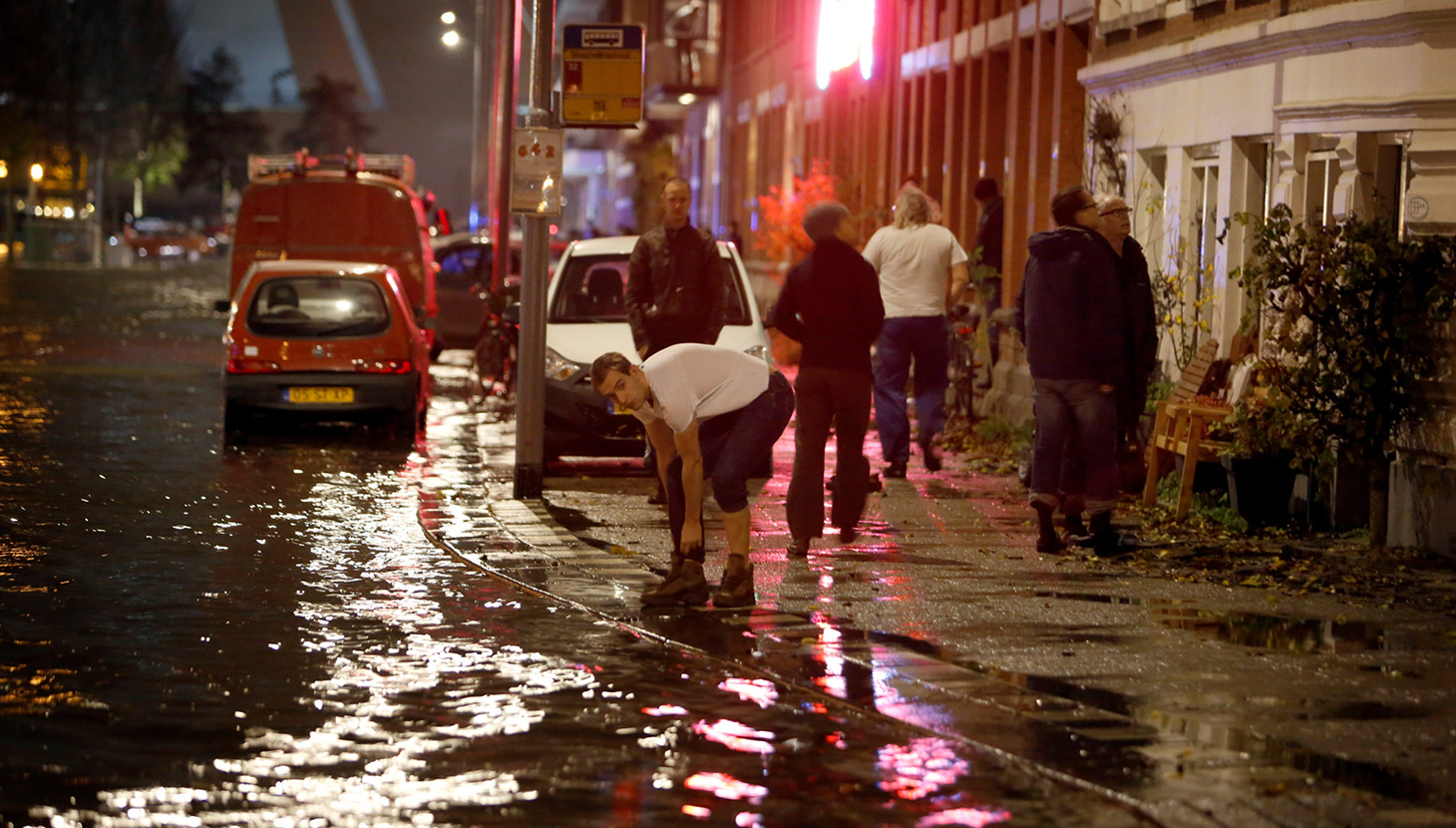 Flooding in December 2013 of the quays of Noordereiland, an island in the river. Image rights: Municipality of Rotterdam

Monitoring traffic in the city shows that the number of cars in the inner city is declining, the use of public transport, especially the metro, is growing and the number of cyclists is almost exploding.

To tackle air pollution and the movement of people and goods, we have recently started the Rotterdam Mobility Agenda. The intention was to have an open debate about the future of traffic flows in the city, which led to four strategies approved by politicians and shared with citizens, entrepreneurs, businesses, innovators and so on. They included an urban mobility plan, a cycling plan and parking and traffic safety plans. They should in turn lead to a more durable approach towards transport, causing less pollution and creating a more attractive city whilst supporting a strong economy.

The second risk is climate change. Rotterdam is situated in a large delta and so water poses the main threat to the city because there is either too much water or too little. In the case of drought, we have seen incidents elsewhere in the Netherlands where dykes made out of peat have become too dry and collapsed. This of course has catastrophic wider consequences.

However, Rotterdam can still rely on its system of storm surge barriers and dykes, of canals and lakes, outlets, sewers and pumping stations to provide a robust basis for a climate-proof city. These systems are continuously being monitored for the greatest potential consequences (financial damage and loss of lives) and areas for improvement. But increasingly, our attention is on the potential threat posed by cyber-attacks and indeed malfunctions to the high-tech computers operating this complex system.

The existing system will eventually reach its limit if periods of heavy rainfall intensify or if drought and high temperatures are prolonged. Severe rainfall already causes flooding on quays, streets, squares, basements and so on, while high temperatures cause a heat-island effect which has, on hot days, created a difference of up to 9 degrees C between inner-city neighbourhoods and the surrounding landscape. This harms the health of the people and affects their productivity, which is why we have taken additional adaptive measures to counteract these problems. 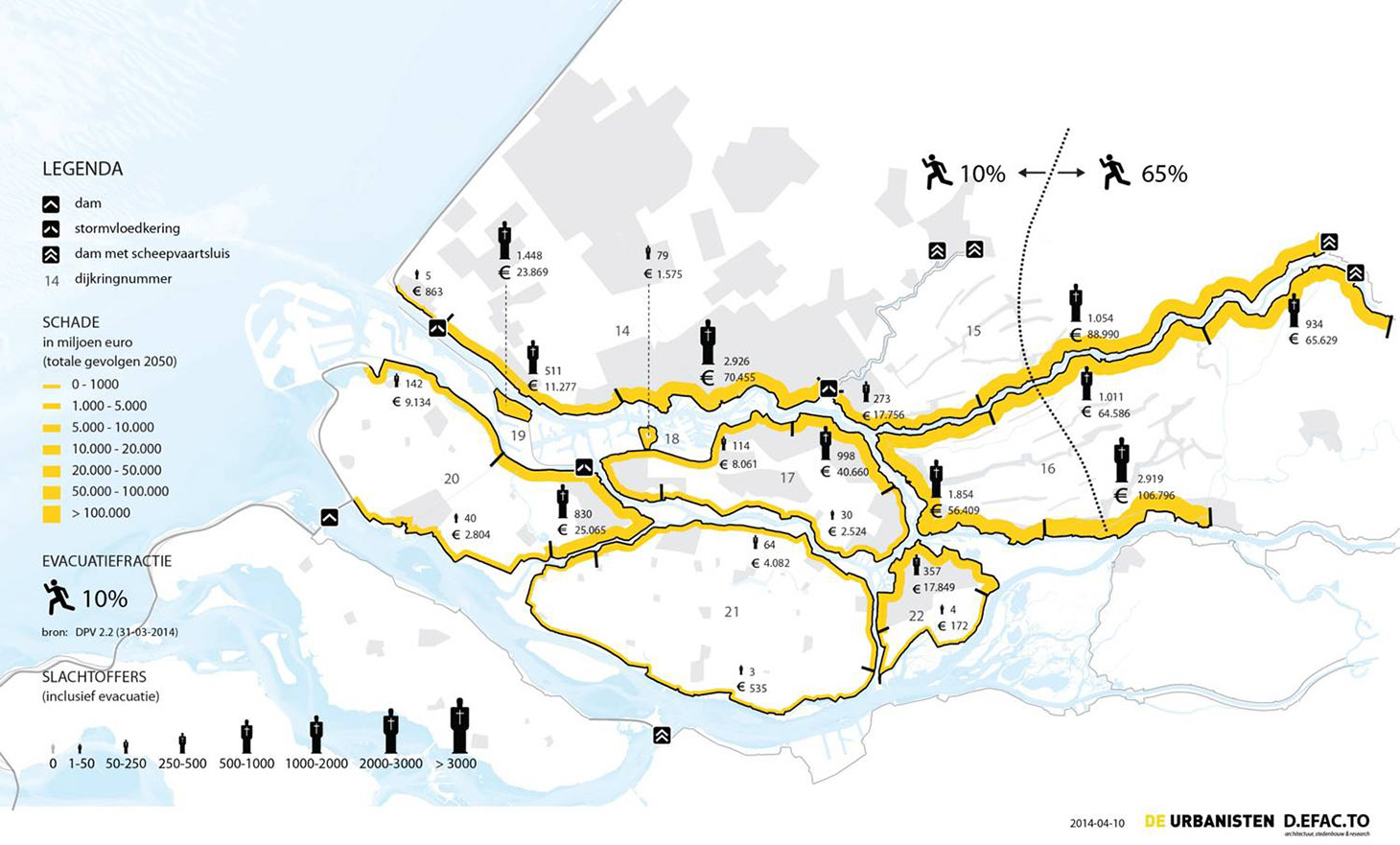 The ‘sponge function’ of the city is restored with measures that keep rainwater where it falls, store it and drain it away slowly. To prevent the heat island effect almost the same interventions can be used. In both cases it means that the city should have more storage capacity, less paving and ultimately more green areas. For example, there are green roofs that hold water (250,000sq metres have been realised in the last four years), more trees and green areas in streets, and less pavement in gardens and squares. Through simple programmes we try to increase the involvement of the public in these initiatives, for example by providing plants in exchange for garden paving, or creating small front gardens by letting people remove the first two rows of paving from the public pavement (as long as it is kept at least 1.80m wide).

Implementing adaptation measures in both the public and private urban spaces requires co-operation with other parties. Citizens, businesses, housing associations, developers, knowledge institutions and interest groups, in addition to the government, all contribute to Rotterdam’s climate resilience.

This ‘blue adaptation’ will make the living environment more attractive and can become the motor for new investment. For example in the city’s Zomerhofkwartier (ZoHo) district, private initiatives including a rain garden, polder roof and rain(a)way paving (temporary water storage in paving – a world-first), together with public initiatives such as a water square (a public square with a storage capacity of 1.7m litres), have led to a climate proof city district in just a couple of years.

Businesses are benefitting from the increased focus on climate adaptation and sustainable urban development too, in addition to the leading international profile Rotterdam enjoys in this field. At present, there are approximately 3,600 jobs in the region that are directly linked to climate change adaptation. The many businesses in the maritime, engineering and delta technology sectors in the Rotterdam region all have excellent growth prospects.

By taking an open approach to tackling the risks posed to our city, trying to involve everyone and encouraging experimentation, we see that these risks can be turned into a positive energy for city development, leading to quick results, innovative ideas and a more attractive city.