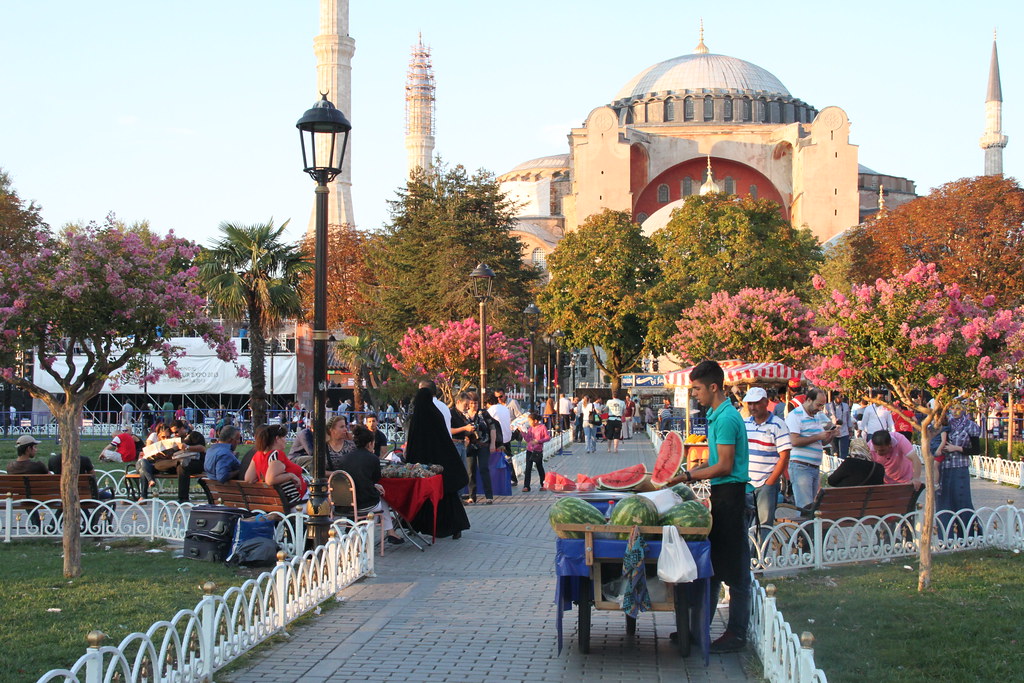 Istanbul, Turkey
Category: The European City of the Year Award 2014
Date of Visit: 2013

1. Transformation of a city image

Within just over a decade Istanbul has achieved an impressive transformation of its image from a insular, politically unstable, high risk investment option, to a globally significant commercially driven capital city, economic gateway between East and West and a serious contender as Olympic host city.

Istanbul faces severe challenges from a combination of massive population growth and ever-present tectonic threats. The progress it has achieved in the last 10-15 years has been made possible by the municipality having clear focus on the ultimate goal, and driving a programme which will deliver all of the necessary components to achieve this goal via several dedicated agencies at an immense scale and pace.

3. Using culture and heritage as an economic driver

Just as the city has repositioned itself economically, it has done so culturally. Having inherited a magnificent built heritage, the city has augmented this by significant investment put into upgrading basic infrastructure (roads, pavements, drainage), public realm (parks, squares, water features) and connectivity via public transportation. Now the 5th most visited city in the world, it has managed to use its cultural heritage to drive a threefold increase in visitors in a decade. With a tourism income growth rate of over 30%, this is set to grow even more over the next decade.

The city faces ongoing tectonic challenges, with the strong probability of a major earthquake (and associated disasters such as landslide, tsunami, etc) within the next 15 years. It is moving fast to try to safeguard as much of its population as it can. Structurally deficient buildings are being cleared at a very fast rate, and replaced in lower-risk locations with new earthquake resistant housing. Structural requirements in the planning and building permit systems are being reinforced and new earthquake resistant construction technologies introduced.

The city has sought to not simply re-establish its historic role as the trading epicentre of East and West gateway, but to proactively take advantage of the opportunities quickly emerging from resource rich nations in Middle Asia, for example those awakening from Soviet-era dominance. It is also politically positioning itself as the judicious interface between Western cultures and Islam.

At just over 13.5 million, Istanbul is the second largest city-proper on the planet by population. The palaces and imperial mosques that line Istanbul’s stunning hilly skyline remind of its historical importance as the cultural, political and economic heart of Turkey. First settled 8,500 years ago, the city was the capital of four great empires: first Roman, and then – as Constantinople – Byzantine, Latin and finally Ottoman. Its location at the crossroads of Europe and Asia, linking the Black Sea, the Sea of Marmara and the Mediterranean, means it has always had immense strategic value as a place of trade, with travelers using the Silk Road, the Bosphorus (still one if the world’s busiest waterways) and more recently major road and rail links. This long history as a major trading centre has created a city where all cultural, ethnic and religious groups have learned to live and work together. Centuries of entrepreneurialism has imbued its citizens with a charismatic industriousness, and a determined yet courteous competitiveness. The centre of the city feels vibrant and alive 24/7, yet welcoming and safe.

Although economic growth has slowed somewhat since its mid-2000s double digit peak to a rate of around 3.5-4% today, the city still delivers 27% of the entire country’s GDP and 60% of the country’s trade – far greater levels than that of Ankara, the country’s capital city since it became a republic in 1923. Tourism is a major boom industry, with 7.6 million visitors in 2012 (up from 2.4 million in 2000), making it the 5th most visited city in the world. Revenue from tourism is growing at over 30%, which is the fastest rate of all global cities.

Now spanning an area of 5,343 sq km, Istanbul quite literally bridges two continents, both above and below ground. Above ground its main commercial and historical centres sit in Europe, with the remaining third sitting in Asia; below the surface it straddles the tectonic divide between the African and Eurasion plates. Unfortunately this makes it highly susceptible to major earthquakes, such as the devastating 1999 quake – with another major quake expected within the next 15 years. Its waterside location raises the possibility of tsunami impact too.

After the establishment of the republican state of Turkey in 1922, Istanbul’s population was relatively stable. In the 1950s it started to grow quickly as people from very poor rural areas, notably in the east of Turkey, moved to Istanbul to look for employment and better living conditions. From under 1 million in 1950, the population grew in bursts to 1.7 million in 1965, to 5.5 million in 1985, to 13.5 million today. At 3.45% Istanbul still has the highest rate of growth of any nation in the OECD, and now accounts for almost 20% of Turkey’s population. On current projections Istanbul’s population will reach 24 million by 2023. Culturally, the in-migration from rural areas has underpinned the rise of more conservative Islamic aspects of the city’s life, as evidenced by the dominance of the conservative-Islamic AKP Party, which has been in power since 1994 and is now led by the former Mayor of Istanbul.

This population explosion has meant that Istanbul’s physical boundaries have had to extend into its hinterland, notably towards the Black Sea, eating up valuable open countryside, agricultural land and rural settlements, and compromising its natural productive capacities. Its municipal limits now extend more than 100km, and are close to absorbing the two nearest cities, Izmit and Tekirdag. Until recently the city’s spatial development was driven strongly by gecekondu neighbourhoods, for example in Gaziosmanpaşa. Gecekondu was a legal loophole which allowed development of a building without any building permits or ownership rights if construction started after dusk and was completed and occupied before dawn the next day. Inevitably physical and structural quality of these gecekondu – along with much of the other mass housing developed in through the last 30 years, plus associated retail and transport infrastructure – was compromised.

It is estimated that 2-3 million buildings in the city will not withstand the major (>7 on the Richter Scale) earthquake, similar to that which hit the city in 1999, killed 35,000 and made 0.5 million people homeless. The urgent driver for Istanbul is that scientists predict a similar-sized earthquake will hit the city within the next 15 years. The city’s disaster-planning scenario for such a tectonic event is for up to 3 million fatalities and homeless. Istanbul therefore recently began a comprehensive 20-year urban renewal programme, which aims to demolish and replace up to 50,000 dwellings per year – many of which are gecekondu, which it is estimated still house 5-6 million Istanbul citizens. Enormous mass high rise, block based housing schemes are being built, often on the undeveloped rural peripheries of the municipality in districts such as Arnavutköy and Ataşehir and Esenyurt, up to 35km from the centre. Many are reminiscent of the large post-war estates developed in the 1950s, 60s and 70s in Western Europe. Unfortunately placemaking with community engagement, such as that delivered by the Kadikoy Design Centre, is rare.

But such enormous growth over such a short space of time has unsurprisingly left the city with a range of other non-housing issues. Congestion and air pollution due to vehicular dominance is a potential threat to empirical economic growth, but also to essential connectivity between areas of socio-economic need and areas of economic growth; it also challenges of quality of life and health equalities. Natural resources are being pushed to their limits, with for example the current water resources only capable of supporting a population of 16 million. Deforestation and loss of natural water storage capacity adds to climatic risks from land stability and flooding, which are exponentially higher due to existing tectonic risks. Essential housing, transport, health care and education infrastructure is under immense strain, despite enormous levels of investment over the past 10-15 years, as is access to green space. The city is some way behind on ecological sustainability measures and in exploiting natural potential from the likes of wind and geothermal power, and is only now just beginning to introduce programmes.

The AKP Party have delivered a welcome period of political stability in the city – for many years a major detractor to investment – plus major institutional reform and modernisation, notably in commercial legislation and finance, enabling introduction of modern loans and mortgages. In order to capture and anchor global investment they reversed the city’s outlook from insular to outward, and within a decade have transformed it into a highly successful transnational corporate business platform. Certain sections of Istanbul’s society have benefited greatly from this newfound wealth over the past decade, which has strengthened the party’s support. By 2010 Istanbul had the 4th largest number of billionaires amongst global cities.

But this wealth has not trickled down to all classes or ethnic groups in Istanbul’s society. Whilst incomes have risen tenfold over the past decade, income distribution is still highly skewed, with a per capita GDP difference of over 60% – one of the highest in the OECD. New neighbourhoods are highly socio-economically segregated, with the middle classes and upwards cosseted in gated residential compounds. Distinctive historic urban fabric and lifestyles are being increasingly replaced with generic high-rise commercial developments and huge nondescript shopping malls.

On the corollary, those at the lower end of society have been hit by a combination of the increasing disappearance of unskilled jobs providing subsistence wages and a lack of upskilling opportunities, the demise of gecekondu rights and a relative dearth of social housing. Poverty and social polarisation has become more visible in Istanbul. Correlation between deprivation and certain ethnic groups, notably Kurdish and Roma, is high. Long established neighbourhoods in central historic areas such as Suleymaniye are being displaced by the first wave of controversial renewal projects and resultant gentrification. As a result, lower classes are increasingly concentrated in poorer rundown areas or in the distant new peripheral housing projects far away from social networks and economic generators, with the risk of suffering the same unintended consequences of similar poor urban quality development in post-war Europe such as loss of community cohesion and social unrest.

At the same time, de-secularisation by the government is generating increasing nationwide tension with those fiercely proud and protective of the nation’s recent republican status. Citizens are increasingly exposed to global influence and consumer lifestyles, yet frustrated and disenfranchised by a top down governmental system (self-acknowledged as ‘powerful mayor, weak council’) which isn’t transparent, does not engage them in decisions and seems to only serve the interests of a minority. The Arab Spring in adjacent countries has added a further dimension to this situation. The current focus of protest and confrontation around Gezi Park/Taksim Square – one of the last large open public green spaces in an increasingly crowded city centre which is being developed by stealth for private commercial uses – is a physical manifestation of this situation, with worrying little sign of compromise.

Yet the transformation and subsequent economic growth that Istanbul has achieved over the past decade is undeniably impressive. The municipality’s clarity of vision and purpose is strong, and is being driven forward at an incredible pace. The city has reinvented itself into a sophisticated global player on the commercial and cultural stages, well positioned to exploit the opportunities as the frontier of ‘East-meets-West’ and the economic gateway to the newly emerging ‘Middle Asia’ region. It has driven delivery via a number of well resourced and professionally staffed dedicated agencies for housing, transportation, conservation, etc, each delivering programmes far greater in scale than elsewhere in Europe, focused on the need to accommodate, move and provide services for a rapidly expanding population, yet simultaneously safeguard them against tectonic threat and natural resource challenges. Considerable concerns still surround some of the mechanisms used, and at some of the ongoing and prospective new challenges this may generate in social and physical terms, but the scale of the issues and the achievements to date cannot be underestimated.