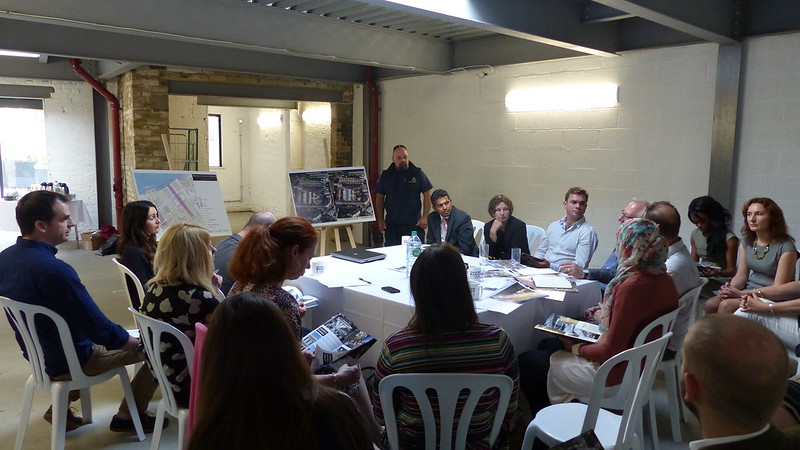 1. This example reinforces the fact that a large land owner can have a transformative effect on a town centre with carefully targeted investment.

2. The result can be more successful in every way through consultation and collaboration and partnership.

3. Any such project can and will benefit from a careful and creative analysis of options and development of ideas before settling on an overall scheme.

4. Not only consultation with the public but collaboration with the community will always improve the outcome. In this case the project relied on the traders returning to their pitch.

5. Markets remain a great way to revitalise an area and to give identity to a community

This is a not unfamiliar story of the value of a declining market being recognised as an asset and turned around as part of a coordinated regeneration project. This particular market is unique as London’s only historic market set within a World Heritage site.

It is owned by Greenwich Hospital; the Royal Navy’s Charity which was established in 1694 by Queen Mary II, to help injured and wounded sea farers and their dependents. It is part of a much wider estate. The market has been at the heart of the town since 1737.

It is however embedded in the core of an urban block, to the south west of the grand planning of the Hospital, and identifiable from outside only by four narrow entrances from the surrounding streets. It could easily be missed by the visitor. Indeed, for many years it was largely unvisited by anyone other than local traders. For 50 years the market continued to decline, stall holders left and surrounding shops fell vacant. We were told that over time insensitive changes and top down management had eroded its ‘sense of place’.

But there are benefits in having one landowner with control over a significant number of properties and therefore capable of making planned and coordinated improvements to an area. Having spent many years conserving the ‘jewels’ of the estate – the Royal Naval College, the Hospital and the Museum, all complimented by the magnificent restoration of the Cutty Sark, the charity turned its attention to the wider context.

There were two clear and parallel purposes behind the recent project. The market and the block it occupies are very much on the route for the visitor to the major attractions and provide, to a great extent, the gateway to the visitor experience. Improvements to this area would improve the context for the experience of the wider heritage site. It was also the intention to deliver the benefits of the successful tourist destination to a wider community and the people of the town.

Over the last few years the market has been transformed. The covered area under its new glass roof is buzzing with new traders, makers and food stalls. Clearly the mix of stall holders has changed, as in many similar markets across London and elsewhere, to include a range of international street food which adds another layer to the sensory experience. In this case there is also a clear leaning towards arts and crafts in an attempt to give the market a specific identity.

The gateways and alleys into the space have all been improved and populated with retailers keen to take advantage of the increased footfall and this regeneration has now spilled out into the surrounding streets. As a piece of urban design achieving a permeable pedestrian network in the heart of the town it is very successful.

The transformation has been achieved largely by the critical partnership between The Greenwich Hospital, the overarching charitable trust, and the Local Borough. There were a number of strategies to be aligned and agreed before much progress could be made. Previous plans for a more comprehensive redevelopment had been strongly resisted by the authority and the community. Issues of conservation versus change and regeneration versus gentrification had to be dealt with and consolidated into a shared vision. The current ambitions to incrementally ‘enhance and improve’ are more popular and widely supported.

Interestingly in this case it appears that a talented firm of London architects were very instrumental in identifying the extent of the opportunities and developing a programme of consultation which was sufficiently inclusive and inspirational to bring everyone along.

Originally commissioned by the Hospital simply to refurbish a vacant property on the corner of the block, Barr Gazetas architects began to explore the bigger picture. An overall strategy was developed for refurbishing shops, converting basements, and developing flats above. With the advantage of the overall control of one landlord the process could happen over a relatively short time scale. Leases were rearranged, tenants could be decanted and temporarily relocated, the refurbishments could be economically programmed and the eventual mix and location of tenants and traders could, to some extent, be controlled. Although not an unusual strategy it has been done with a great deal of sensitivity and flair.

There is no question that the transformation has been very successful. In 1985 the market had been reduced to an ad hoc event one day a week. Now it operates seven days a week selling crafts, collectables and street food. There is 2000 sq. ft. of trading space and 200 regular stall holders.

The market management promote the new space as ‘not only a market but a community centre’. There is certainly a programme of regular events which are clearly well supported by a community who feel a strong sense of ownership and the partnerships with the University of Greenwich and Trinity Laban Conservatoire of Music and Dance contribute to its cultural identity.

Considering the usual criteria by which such places can be assessed, there is no doubt that this thriving and attractive place is the consequence of clear leadership and good governance with the inclusion and enthusiastic participation of the community. The design has been sensitively handled in a conservation context and it appears to be a commercial success.

It will be interesting to see how viable the market itself remains going forward. It is becoming increasingly clear that with high street retail moving on line, other types of trading will attract people into our town centres and this is a fine and significant example.