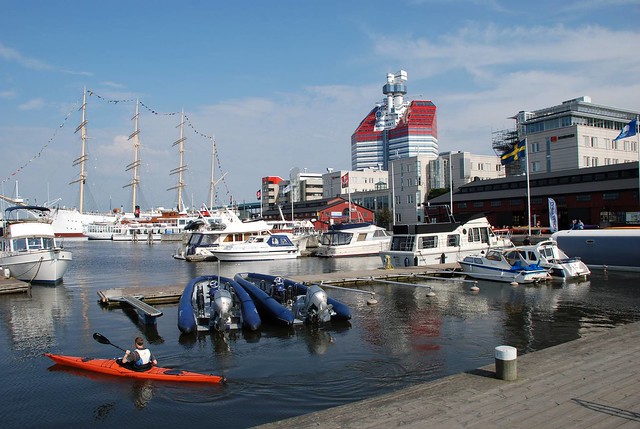 1. As a growing region with a diverse economic base, Gothenburg has a collective vision for both the city proper and its surrounding region that is based on increasing the scale and density of the city core, while directing development towards nodes and corridors that are supported by a strong public transport network

2. There are strong partnerships that have been rooted in the city’s transformation to a knowledge and skills-based economy between the public sector, the business sector, and the academic institutions within the city (the ‘triple helix’ approach), which have contributed to the city’s past successes and future plans

3. Considerable efforts have been made to reduce the impact of cars in the historic core, with many streets being pedestrianized and repaved as shared space (involving painstaking negotiation with property owners), transforming the street life and atmosphere of the city in concert with other public realm investments including riverside walkways, waterfront activities, green spaces, play areas, and public art

4. The city has focused on making maximum use of the physical and cultural resources through the reuse of land and buildings for development, and the major transformation of the riverside (the former port and industrial land) Gota into a ‘rivercity,’ comprising mixed uses, including major residential development, effectively doubling the size of the urban core

5. Gothenburg seeks to pursue a sustainable development model that delivers a balance between economic, environmental, and social objectives, with the greatest challenges being: ensuring social cohesion with a large immigrant population; the needs of youth and children are reflected in city plans and decision-making; and, promoting public transport and cycling/walking strategies to encourage sustainable living

Gothenburg developed nearly 400 years ago as a fortified town on the southern banks of the river Gota. It grew as Sweden’s westward facing centre of trade and industry which culminated in it becoming a world centre of shipbuilding by the 1970’s. After the collapse of this industry, the city embarked on a major programme of physical and economic transformation which continues. Today Gothenburg is the centre of a strongly growing region with a diverse economic base.

A strong collective vision has been put in place for both the city and its surrounding region whose populations are 520,000 and 1,070,000 respectively. This is based on increasing the scale and density of the city core and directing development towards nodes and corridors supported by a strengthened public transport network. While the City Council plays a dominant role through a wide variety of municipal companies, partnership working takes place with both major business and the Universities –using the so-called ‘triple helix’ model. Major efforts are made to engage people in the planning of the city. However extending this to the city’s large immigrant communities is a challenge given the patterns of social segregation which exist.

Gothenburg remains a working city. Faced with the challenge of a post-industrial future Gothenburg is using the heritage of its 17th Century core and its waterfront to create a new city based on the quality of place and the knowledge and skills of its inhabitants. The city has long offered leisure attractions through the historic Liseberg amusement park, but has now added conference facilities, a new opera house and a range of waterfront activities, including Ralph Erskine’s iconic ‘lipstick’ building.

The historic core of the city with its defensive canals, planned street layout and the Gota river waterfront provide Gothenburg with a strong sense of place. This has been extended to the new residential and mixed use neighbourhoods of Eriksberg and Lindholmen, which take advantage of their waterfront location. Away from these locations the character of the city is less distinctive although Gothenburg benefits from the penetration of surrounding pine forests deep into the urban area. This green character is reinforced by a strong network of open spaces which are available for community use and a coastline characterised by islands and inlets.

The City Council is investing substantially in new and enhanced public space. Buildings such as the opera house seek to provide new landmarks as do the University buildings found at various locations across the city. For the most part however the emphasis is upon good quality functional design to high environmental standards. Gothenburg is not a city which attracts glitzy architecture and design, although this might form part of the city’s ambitious plan for the new ‘rivercity’ development. Gothenburg is a growing city attracting students and immigrants from across Sweden and the world. New residential and business areas are emerging on the site of the old shipyards on the northern bank of the Gota. These offer the opportunity for people to live close to the heart of the city in contrast to the peripheral and suburban neighbourhoods which are to be found across a city.

While the port remains a significant element in the city’s life, and a large manufacturing sector persists, there has been a strong focus on new growth sectors based on technical knowhow and innovation. This has been promoted through collaborative working between the City, major businesses and the Universities and has resulted in four science parks containing business incubators. The growth of the service sector – tourism and leisure, office and business services – reflects the physical changes of the city as it has transformed itself from a centre for heavy industry to an attractive waterfront city using its heritage and natural assets.

Gothenburg is actively pursuing a sustainable development model which seeks to deliver a balance between economic, environmental and social objectives. The greatest challenges appear to be in ensuring that social cohesion is achieved in a city which has absorbed a large amount of immigration, resulting in social segregation which is unusual for a Nordic country. Particular attention is also being paid to ensuring that the needs of children and young people are reflected in the city’s plans and decision making. To this end the City has developed a new tool to assess the potential social impact of its decisions revealing a strong commitment to ensuring the sustainability of the city’s communities.

The City is also seeking to deliver on environmental objectives. This is being achieved by reducing energy consumption in buildings which are increasing built to exacting standards, and minimising the use of carbon in energy production. This is facilitated by the City’s ownership of CHP (combined heat and power) plants, which serve most of the city. Pioneering work is being undertaken in the use of local produced bio gas. Public transport, cycling and walking are being aggressively promoted and are the focus of a major investment programme funded through a toll on private vehicles entering the city. Increasingly vehicles are being powered by renewable sources of fuel. All of this reflects a deep seated sense of responsibility for living sustainably.

Gothenburg is investing heavily in new public transport facilities. This is to be funding in part by road pricing charges to be levied on private vehicles entering the city as mentioned, part of a transport package negotiated with the Swedish Government. Significant improvements are planned including a new cross-city rail link. This will complement existing tram and bus networks and the use of passenger ferries serving communities on the banks of the Gota. Within the city centre, cycling and walking are being actively promoted while parking spaces and charges are being actively managed. This is beginning to bring about modal shift. The historical development of Gothenburg and the physical limitations imposed by the river rather fragments the city. While the historic core was developed on the basis of a clear plan, other development has been more haphazard. While the old city and its neighbouring suburbs act as the focus for higher level uses, the city does not possess a clear urban structure, although this may emerge as a result of the strategy and ambitious plans now being pursued.

Gothenburg provides a fine example of a waterfront city which has undergone transformation from an industrial to a service-based economy. This has involved both physical and economic change which has been delivered through effective partnership working between the City, business and the Universities.