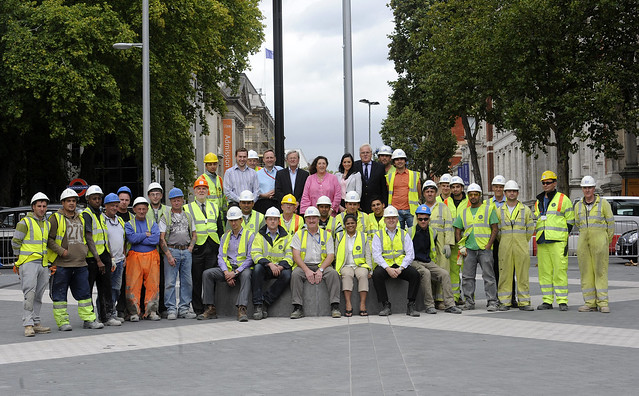 The success of Exhibition Road stems from its strong leadership, clear vision, quality design, and excellent communication between all those involved throughout the design and construction phase

This project, although unusually large and expensive in the UK, shows that creative engineering is possible, and that rules and regulations can be challenged to develop projects – however, it may not be the most replicable model

Although the street has been redesigned to a high quality, its user-friendliness could be improved through public realm additions such as street furniture. Some additions have already been made since the developments opening based on user habits; however, a major hurdle to further streetscape improvements is lack of resident approval

The historic nature of this street means it has little active frontage – the urban scale is very large but there is a clear structure to the street network around, and the street design is of the appropriate scale

Exhibition Road is home to an extraordinary group of world-class institutions that share a unique cultural history. Founded from the surplus generated by the Great Exhibition of 1851 this street has always been one of the grandest in London. Linking Hyde Park to the North and Kensington to the South, the street now has over 11 million visitors every year. But five years ago, Exhibition Road was a place with serious problems: pavements that were too narrow to handle the high volume of pedestrians, roads dominated by traffic, highway clatter, and spaces of very poor quality.

The Exhibition Road project, a rather grand one at that, has changed the area dramatically and is truly an exemplar in the way new public realm projects should be managed, designed and executed in the UK. Led by the Royal Borough of Kensington and Chelsea in partnership with the City of Westminster and the Mayor of London, the changes that have happened to the public realm of this street are of a visionary scale matching the urban quality and grandeur of Exhibition Road. This is a project whose success lies in clear leadership with a clear vision along with a strong design and great clarity in communication with all those involved at both the design and construction stage.

The catalyst for change in the area was the re-planning of the one-way traffic system around South Kensington station. This has now been returned to a series of two-way streets which have reduced congestion for pedestrians and motorists alike with a knock-on benefit that traffic volumes along Exhibition Road have reduced by up to 30%. The changes that have happened around South Kensington station now seem quite natural. Spaces outside the station and along the streets make pedestrians feel that this area is once again part of London and not a race track for vehicles.

The design for Exhibition Road itself is a very strong statement of interconnection linking all places across and along the street. However, it is a design that in-itself is broken down into a series of quarters, to the north is the park with a connection to Kensington Gore followed by the cultural and residential quarters near the Albert Hall, both…Cont. …of which are in the borough of Westminster. The bulk of the space is in Kensington and Chelsea and surrounds the Natural History and Victoria and Albert Museum, as well as the Imperial College of London. There is a generous crossing over Cromwell Road linking these spaces to South Kensington centre.

A walk along the street gives experiences of changing character. To the south around South Kensington tube station, spaces are softer and have a high level of mixed-use interaction with pavement cafes full of life. This is a place to go to, whereas above Cromwell Road is more of a place to go through. Here, the elegant design leads you into more formal spaces around the museums, and the powerful design reflects the urban scale, but in many ways lacks an intimacy and character. Trees have been placed strategically where possible and opportunities to sit and take in the view have been missed. But the real success of this space lies in how traffic and pedestrians can interact as equals.

That said, this is truly a grand project of a scale that was needed for London in 2012. It is a project that is receiving national and international recognition, but with a construction value of over £26 million, it is hard to see how places like this can be replicated in the harsh econimic climate that we are experiencing. Exhibition Road can be seen as a special place of immense success showing clear leadership and vision with a clarity of design that has been executed excellently on site.