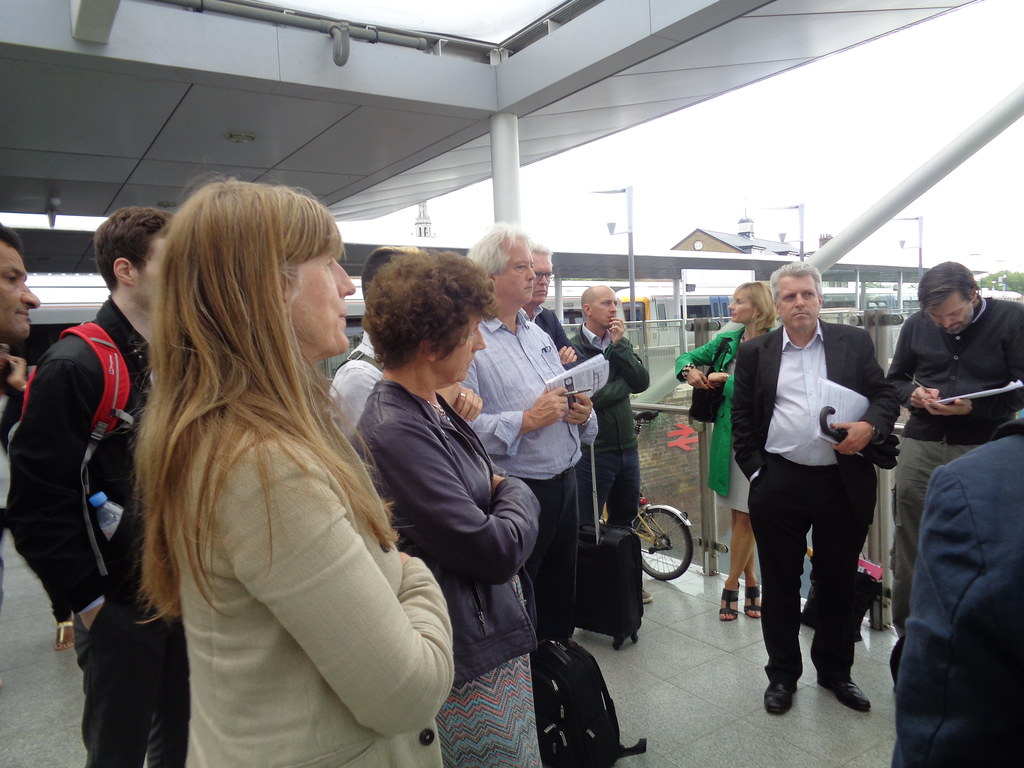 1. Integrating train station with high street
The Council entered innovative negotiations with National Rail to totally transform the station context. This triggered the impressive built improvements which have refreshed the whole high street.

2. Community involvement
This happened on micro and macro levels and displayed massive enthusiasm and perseverance. The built result of the Deptford Lounge is a magnificent example of library, computer labs, study area, café, rooftop ball court and Tidemill Academy – an innovative primary school.

3. A street rebuilt to…
Following a November 2011 survey, the council commissioned a complete redesign of the market area of the street and shop fronts which is almost complete. The design is a triumph which balances aspirations with pragmatism.

4. Market stalls as economic catalysts
The council recognised that market stalls are a great way for entrepreneurs to start their own business. A series of initiatives including apprentices, moving art schemes, special events and infrastructure enhancements have refocused the market’s energy in a responsive way.

This street has tackled many of the issues faced by urban high streets and emerged with stimulating lessons in how councils and retailers can work together to achieve effective regeneration. As with many successful high streets, it is the activity away from the street frontage, which adds richness and diversity. In this case, the strong connectivity with these adjacent projects reinforces the success of the high street itself.

The section of high street where the projects below are located accounts for only half of its total length. It is expected that with projects such as the renewal of the station at the halfway point, the regeneration process will spill over towards the river, though this is by no means a certainty.
Deptford is an admirable example of a local authority creating opportunities in conjunction with many organisations to create improvements. Lewisham is to be commended for creating a proactive framework for change within a great asset of a street market and independent shops. It reported what we considered to be exemplary consultation processes on all of the projects that contribute to this successful street.

A 2005 survey of London’s high streets said that Deptford was top of the ‘Best Mix’ and ‘Diversity’ categories. This was the catalyst to seek grant money to enhance the physical and economic qualities of the high street around the theme of ‘Deptford is Changing.’

The Edges around the High Street
There have been innovative changes along the length of the street that have all contributed to its holistic success. Ten schemes were noted by the council including those below.

Margaret McMillan Park has been made a legible and secure link to the high street and won a London Planning Award in 2012. Modern housing has been built in the adjacent streets which give new vitality and raise design aspirations.

The Deptford Lounge has combined library, Tidemill Academy and leisure centre in an uplifting example of overlapping functions, creating a great building and a new public realm on a previously abandoned space.

The council used negotiation and planning enforcement to buy a neglected, listed carriage ramp from Network Rail for £1, which enabled Richard Rogers and Cathedral Group to develop an integrated public realm scheme with 132 new homes and seven retail units. The developer has worked with the previous archway traders and market stallholders to offer priority tenancies to then ensure continuity and local-led regeneration.

£7.5m in funding was achieved to allow Network Rail engineers to prioritise works to totally transform the railway station, which greatly improved the perception of the high street.

Radical changes have been made to vehicle parking at the edges of the high street. A ‘parking boulevard’ was created to free up space for the Deptford Lounge project. In addition, the first-ever restricted parking regime in Lewisham has been set up.

The Albany Theatre has an excellent reputation based upon engagement with the local community and financial support from the council. It is hampered by a building that acts as a barrier rather than a gateway to Griffin Square, adjacent to the high street.

As the desirability of the high street rises so does the opportunity to build homes on land owned by the theatre. This brings more life to the high street and will allow a more accessible theatre, which also curates the Deptford Lounge events and uses the public realm to brilliant effect. Senay Gaul of the Albany Theatre told us that “it is really important to us to animate the market and high street by outreach events.”

The High Street
The council appointed BDP to work alongside their Planners and Programme Managers to improve the high street. They have formed an integrated team of professionals who have obviously enjoyed working together. From the start they have immersed themselves in the multicultural life of the street and the market to achieve excellent results. Although public meetings were held, they visited the shops direct rather than waiting for them to attend.

Mehron Kirk of BDP headed the process and said they wanted to create a high street and Griffin Square that looked “as it was before, but better.” The built result completely transforms the use of the high street but in a way that does not dilute the vitality of the market and shop traders. This is a difficult balance to achieve but it works very well here.

The road has been repaved with high-quality, durable materials. Lighting, in-ground power, parking and deliveries have been substantially improved. Six shop fronts have been redesigned and new ideas for stall display stands have been implemented. Six new stalls have been created and Griffin Square has been refurbished to form a pleasant public space to integrate with the new housing, and listed carriage ramp.

The Renewal Manager’s input has led to market apprentice training, special events, and engagement with the Deptford Society, the Griffin Street Food Fair and culinary tours to engage with the multicultural shops and stalls.