When part of Bristol’s industrial heritage came under threat in the 1980s, a local architect took a gamble. George Ferguson AoU, recently Bristol’s first elected mayor, tells the story of how he came to buy the site and build a community.

This is a story of a very personal mission in placemaking and real regeneration that I have undertaken over the past 20 years in my home city of Bristol, well before becoming its first elected mayor in 2012!

What is now known as the Tobacco Factory, built in 1910, is a four-storey, 4000sqm building which was just one small part of the massive Imperial Tobacco Co. estate built in Bedminster and Ashton from 1901, on what was then open land, lying south of the river and harbour that divides the city. Imperial Tobacco, which included the famous WD&HO Wills brands were at the heart of the city’s industrial revolution and the greatest contributor to Bristol’s economy and culture.

In the early 1970’s, Imperial relocated its HQ and Factory to a ‘Miesian’ masterpiece and rolling landscape in Hartcliffe on the southern fringe of the city, leaving millions of square feet of empty buildings and a deeply depressed community that was further shattered by the closure of the new site when Hanson took over at the end of the 80’s. Unemployment and poverty levels were amongst the highest in the country.

The great brick factories, a model industrial development of their time, were largely designed by the flamboyant architect and later Bristol Lord Mayor, Sir Frank Wills, who had it made professionally as a member of the Wills tobacco family! He also designed the richly decorative Bristol City Art Gallery, which was just one of the many great gifts of the Wills family to the city and its institutions.

For many years I had woken every morning to the magnificent industrial view of the WD&HO WILLS skyline sign, rising above the workers’ terrace houses, across the river and harbour from my Clifton house, and had long admired what I had thought of as Bristol’s ‘mills’. However my active involvement began at the end of the 80s, when I had been asked for help by two recent graduates who lived nearby who were determined to save the great red brick complex from demolition.

With them, I did my utmost to stop demolition at a planning inquiry and subsequently developed a sketch plan, re-using the powerful four and five story buildings, entitled ‘a sustainable urban village’. My faith in the planning and heritage protection system took a deep dive. Subsequently, not being prepared to contemplate defeat, as demolition commenced I made a silly low offer for the corner site – to secure a foothold and to try to bring others on board. I paid £5 per sq foot – cheaper than carpet. I was not expecting my derisory offer to be accepted so had to scrabble around to raise the funds. The property agents thought I was crazy. They were right – I failed to save the vast majority of the buildings, which were replaced by bungalow development in the form of an Aldi supermarket and car park and adjacent nursing home, all of which could have fitted into a fraction of what existed.

Did I have a plan? Not really – just that I wanted to demonstrate to my sceptical property agent friends and foes, that all they preached to my clients about the benefits of single use ‘monoculture’ development was misguided. I was determined to go the whole hog and show them that the more you mixed it the better it would be! The challenge was that I found myself with a building beautifully sited at one end of a run down high street in an area that was suffering from depression at the loss of its staple industry and employer. 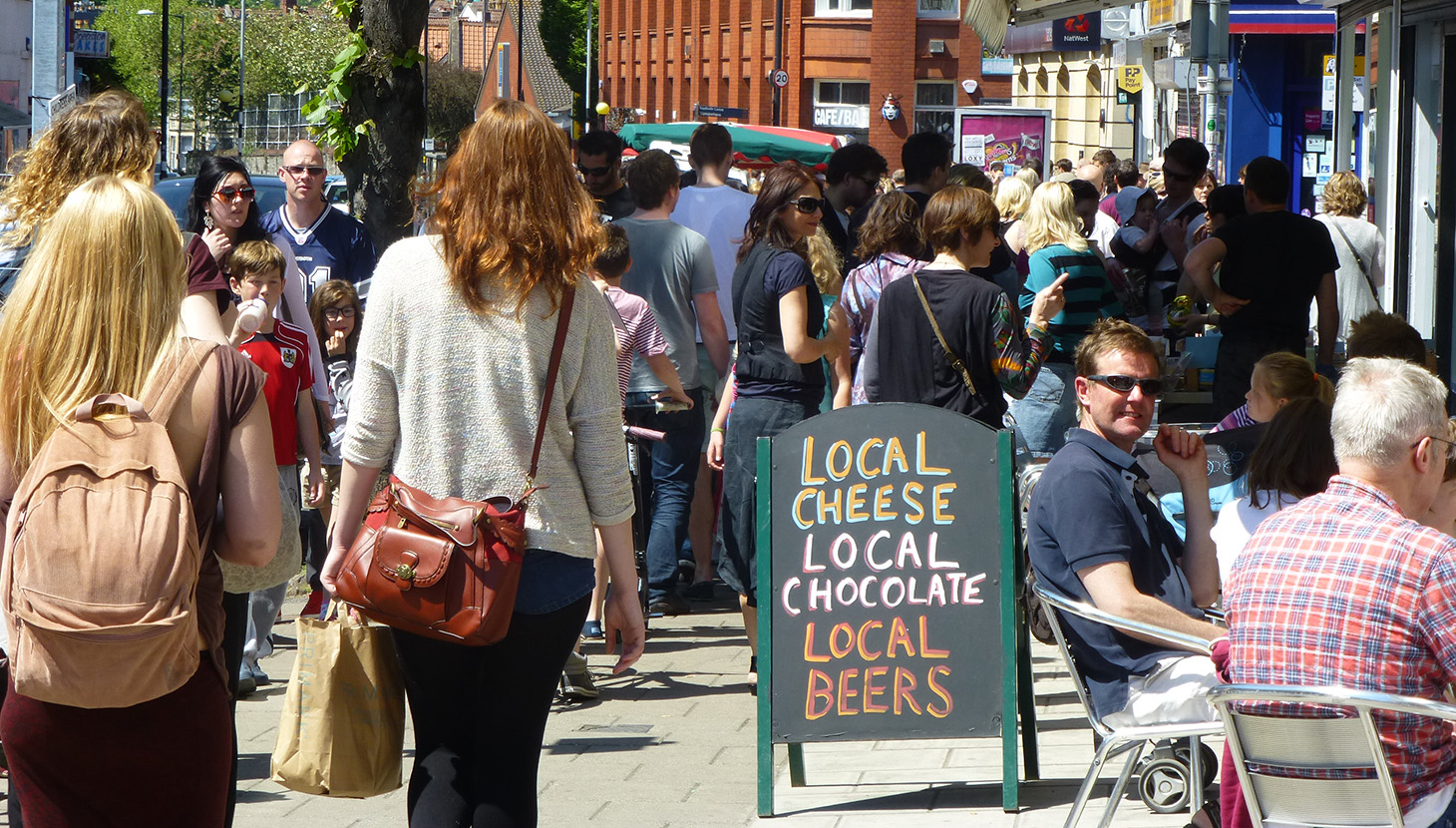 Having no money to spend on the building I first let some artists in to occupy space and protect it from the local villains who were breaking windows, vandalising the interior, and stripping the lead flashings from the roof. Having met Sir Ernest Hall the great entrepreneur who had bought the old Crossley carpet factories at Dean Clough in Halifax and seen how he had led a remarkable regeneration by involving artists and the arts, I felt strongly that the Tobacco Factory had to put the arts at its core. My instinct was that this should be the performing arts, partly not to compete with the nearby Spike Island studios – and that it should strive to give a new heart to the community and to what was the ‘cultural desert’ of South Bristol.

Serendipity would have it that the small but adventurous Show of Strength theatre company was looking for performance space. It fitted my plans – so, having identified a space on the first floor I stripped it bare, leaving only a few ducts and other features to maintain the factory character, and left them to paint it black, bolt up some lights, and get on with it. That was the birth of the Tobacco Factory theatre that has earned itself a national reputation for its creativity and quality of productions.

20 years on we have only had two aims – and they are, firstly that what we put on is as good as it gets of its type, whether it be traditional, new writing, comedy or music, and secondly that we attract new audiences to live theatre. I think the record shows that what is now the Tobacco Factory Arts Trust has done a fine job in meeting those aims and Bristol’s second theatre’s reputation rides high! 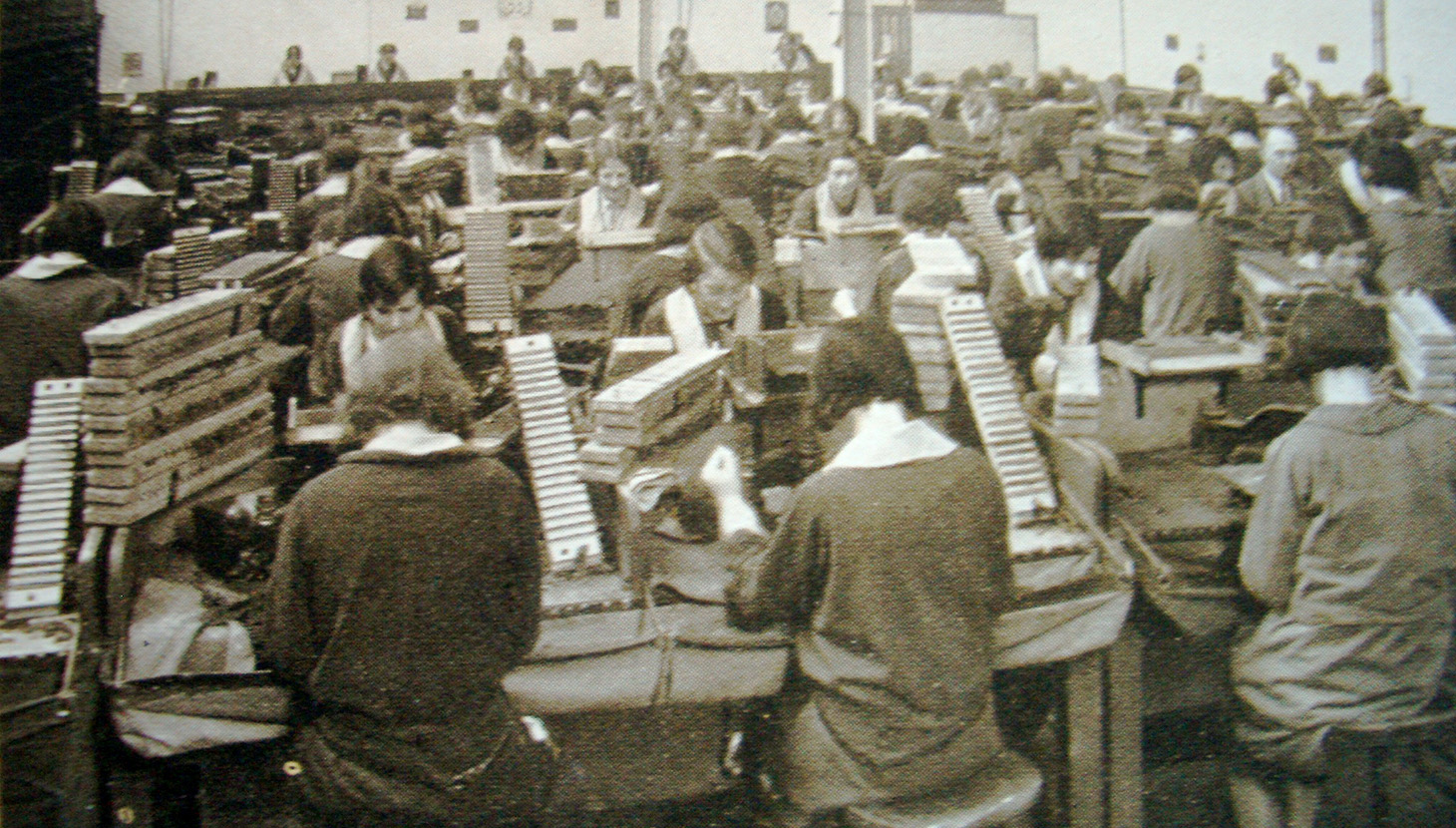 The theatre was and is at the heart of the Tobacco Factory, which with its management and dance/rehearsal space takes over the whole of the first floor, leaving the ground floor for eating and drinking, the second floor for creative industry workspace, and the top floor a mixture of workspace, conservation studio, fitness gym and residential use, including my own loft living space (or should I say caretaker’s flat?) that I have been happily living in for the past 15 years.

So here we have a community of activity, and a reviving local economy, but it does not stop at the building. A weekly Sunday market taking over the car park has become the community’s meeting place, encouraging new independent traders and extending into a car free Raleigh Road once a month. Down the road we opened a brewery – the BBC food & farming award-winning Bristol Beer Factory – which also helped spawn an artisan bakery, celebrated by Jamie Oliver, as well as a studio theatre and dance space in an old garage. Expansion plans include a brewery visitor centre and apartments in the brewery tower, all making use of existing buildings.

All this is underpinned by a strong environmental ethic ranging from re-used materials to renewable energy – the theatre is cooled and the fair trade coffee is brewed via solar panels – to a strong bias towards independent and local, including local sourcing of food and skills. 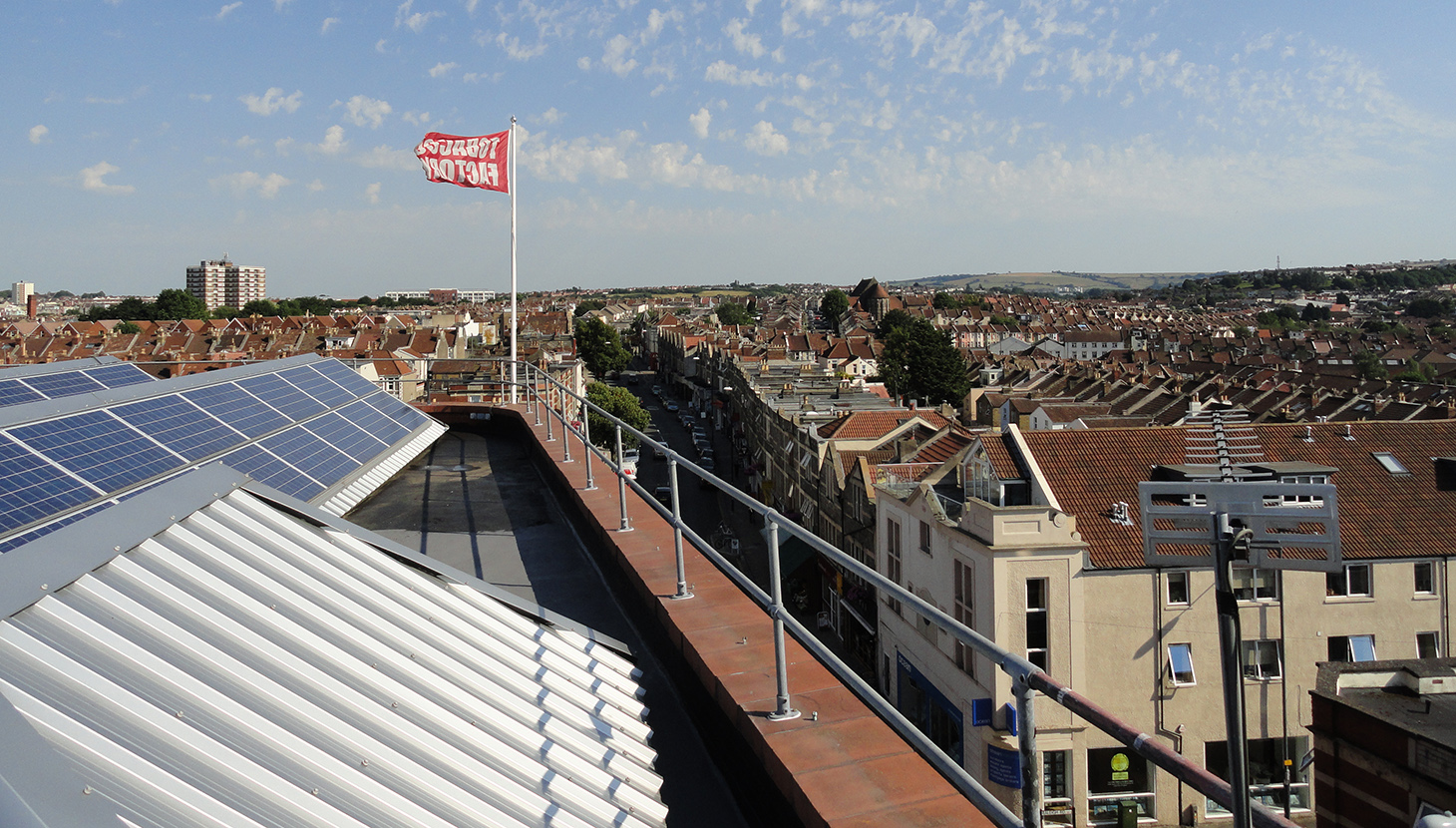 So why does all this matter? It matters because it has transplanted a heart into a community that desperately needed reviving, without turning its back on its traditional working class population who had lost many of its shops and services. The Tobacco Factory is not so much a project than a self-sustaining slow revolution. It will continue developing throughout my lifetime and hopefully well beyond. The theatre will of course develop its programme and audience under the care of the Trust and the rest of the building will change to react to circumstances but with its strongly held principles remaining in tact.

Maybe one of the things that gives me the most wicked satisfaction is to see some of the property agents, who clearly thought I was crazy buying the building in the first place and who were religiously opposed to the sort of extreme mixed use that I have been advocating, bringing their clients in for lunch to show them how it can be done! Now that I am no longer part of my old practice I am able to concentrate on these other aspects which are ‘beyond architecture’ and yet at the same time very much about bringing the built environment to life. North Street, Ashton and Bedminster, not long ago on their knees, are now one of the liveliest independent high streets and neighbourhoods in Bristol. 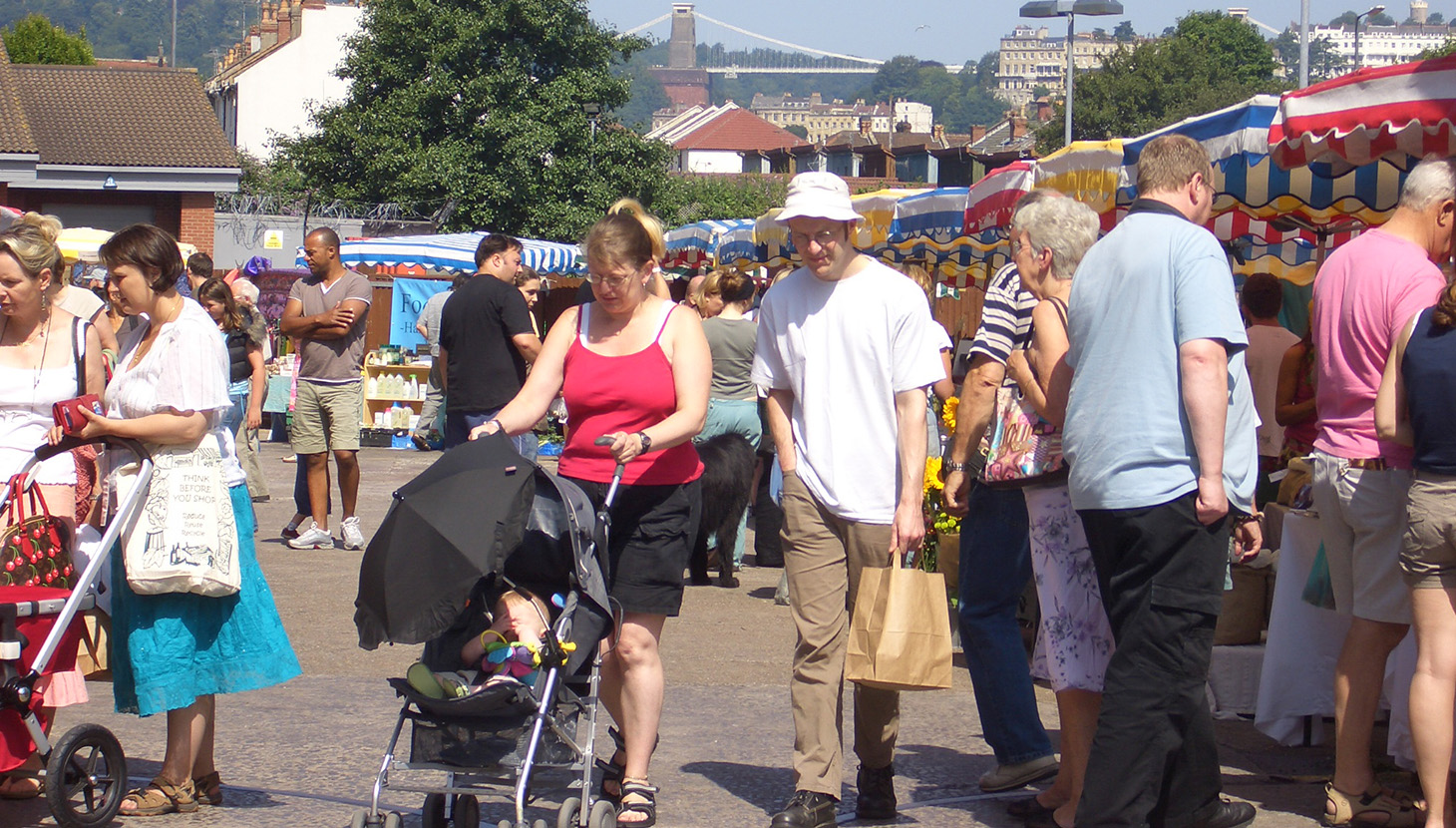 The postscript to this story is, however, the regeneration of the 1970’s Hartcliffe Imperial HQ SOM Chicago building and landscape I mentioned earlier, which is being developed by Urban Splash who commissioned Ferguson Mann to convert it into a great new living community in an area that so desperately needs a boost. So the 800-year life of the Corten steel frame will be put to a new use that replaces one of Bristol’s most famous killing industries. So starts another story of creative reuse of Tobacco legacy, which was not all bad!

The lesson to me has been that we don’t bridge the gap with big architecture and swanky development, in fact the reverse is so often the case. But that we do, if we tread lightly, make the most of what we have and inject new life into old structures and places to create socially and culturally vibrant communities. The other lesson is that good placemaking needs continuing choreography and the job of the placemaker is never ever done. There is so much more we must do to help mend our deeply unfair society.

Mayor of Bristol 2012-16 and Honorary Academician