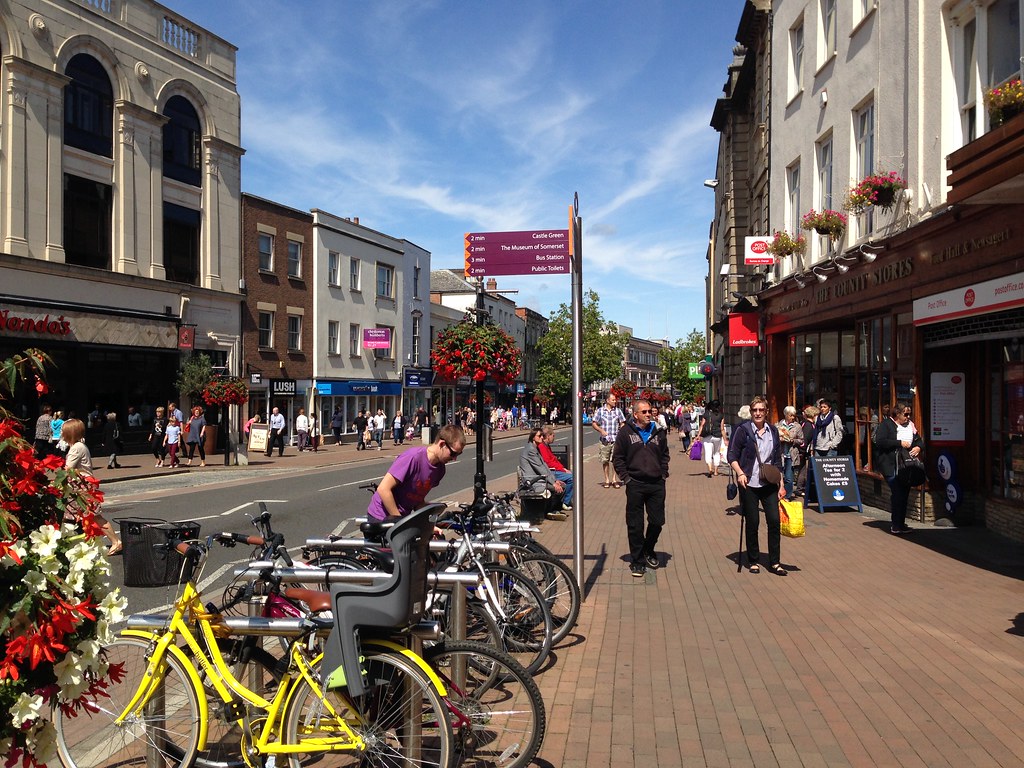 Traffic calming
The traffic calming of a main shopping street over time has the potential to open up development opportunities in the streets leading off it.

Pleasing pedestrians
Winning support for full pedestrianisation remains difficult. The ‘off-street’ improvements, together with improved pedestrian space on the high street may prove to be a better, more sophisticated regeneration solution

Taunton is the County Town of Somerset and has ambitions to become a major centre to compete with Exeter. As such it is not only the home of the County Council but also the County Cricket Ground. It is located on the River Tone that emerges from the Somerset Levels and has been recently in the news with regard to flooding. The train station is on the main line from Bristol to Plymouth and the Southwest.

The M5 motorway effectively created a by-pass for all traffic previously using the A38 heading to Devon and Cornwall but the A358, carrying traffic westwards to the coast, still runs through the town and puts pressure on Bridge Street and North Street, the streets nominated for the Great Street Award.

The Street:
Bridge Street / North Street was upgraded some years ago in the ubiquitous style that consists of widened pavements of red brick paving, new co-ordinated high-quality street furniture and some de-cluttering. In addition there has been a more recent scheme at the southern end of North Street, which involved creating a new roundabout around a memorial and closing off a section of carriageway to enable cafes to spill out onto this quiet section of the street. This later scheme attempts to address the lack of local distinctiveness, which was a characteristic of the former scheme.

Traffic Management:
A new section of road was constructed recently, known at the Taunton Third Way Project, and now re-named as ‘Tangier Way’, which is the first stage of the Northern Inner Distributor Road. This has enabled through-traffic heading west and to the coast to by-pass the centre. At the time of its implementation the council undertook a consultation to close off the main street to traffic for part or all of the day, effectively pedestrianising it. This was rejected primarily by traders who felt it would damage trade, though it was supported by Taunton Transition Town. The traffic, which is mainly local, has reduced and the Council is waiting for movement patterns to settle down, following the new road opening, before making further decisions about pedestrianisation. Complete removal of all traffic from the street is unlikely to be viable or particularly desirable. The street has managed to combine traffic speed reduction with pedestrian comfort and safety in a way that continues to deliver a thriving town centre.

Bridge Street / North Street is the main shopping street so the units are largely high street multiples but the units are large enough to offer a reasonable floor space in each, which makes the collective offer worth travelling for shopping. The traffic calming and enhancements strengthen the retail positioning by creating a pedestrian friendly street, despite heavy traffic flow. Taunton is a small town with lots of competing centres nearby, so the extremely low number of vacant units is notable and Bridge Street / North Street was bustling on the day we visited.

Ripple effect benefits of traffic management investment:
Therefore, while Bridge Street / North Street is the nominated street, it is what has been achieved in spaces immediately off the street which is of interest and offers learning for the Academy. These enhancements and investments would not have been possible had Bridge Street / North Street not benefited previously from investment in an expensive and well-detailed street scheme. Arguably this nomination is less about a Great Street and more about a Great Town in the making but it started by tackling the challenges in one key street some twelve years ago and rippled out from there.

The Council has set about a programme of enhancements on previously unsuccessful sites just off the North Street. These include:

1. ‘Somerset Square’ – linking the Brewhouse Theatre to the riverside fronted by a new block of retirement flats that doubles as a stand for Somerset Cricket Ground. It is a good example of bringing residential development into the town centre, undoubtedly the calming of the adjacent Bridge Street / North Street makes this development more appealing. It has a riverfront setting but is also a very short walk from the main street.

2. ‘Goodland Gardens’, which includes a raised pedestrian walkway, a new footbridge over the River Tone and a public toilet converted to a successful family café, which has transformed a dark and unpleasant space into a vibrant one designed to be safe and welcoming to adults with small children. The scheme was completed in 2012 and is also on the riverside

3. ’Castle Green’ – a former car park and now a spectacular but understated stone-paved square/events space, creating a well-ordered setting for the refurbished Castle Museum and a clever use of ‘shared-space’ principles, such that it still has a highway running through it. A café in the courtyard of the Castle, which houses the Museum of Somerset demonstrates that the investment is encouraging people to come into the town centre to spend time and money. This scheme also includes a beautiful footbridge across the dry moat of the castle, also completed in 2012.

In addition to enhancing the pedestrian and visitor environment these schemes are exemplary interventions to address flood risk in a creative way that brings much wider ongoing benefits than simply preventing flooding. They encourage greater footfall around the centre and offer visitors respite from the busy main street.