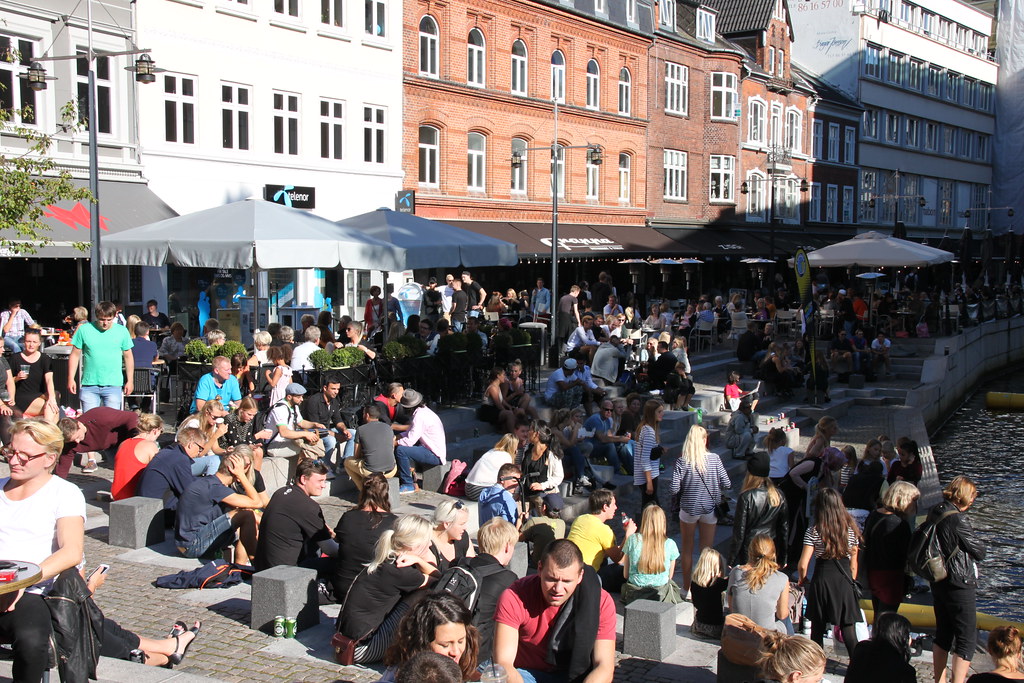 1. Empower through responsibility
The Danish national/local system of governance provides for a devolved sense of ownership with power and budgets vested in the City, encouraging a predominantly young demographic making a more dynamic civic authority attracting educated and intelligent politicians.

2. Plan for future connections
Aarhus has a well-connected, compact city centre. However as the city expands the outer suburbs may lack the equivalent of local centres. The urban intervention at Gellerup and Toveshoj (recovering mono-functionality) will provide a significant local centre and is a model for what may be needed elsewhere. The airport is around 20 miles from the city centre and is not at all well connected.

3. Enable the community to self-help
The value of facilitating inspiring people with ideas and commitment to work at the ‘community’ level by providing space and resource (Institute of X, Gellerup Football Club, etc.).

4. Dare to design
The value of a commitment to a design-led procurement route (Dock 7) combined with proactive urban fabric experiments during the annual festival (railway station frontage and park / traffic management).

Aarhus, the ‘Capital of Jutland’, is the second-largest city in Denmark and the country’s main port, located on the east coast of the Jutland peninsula.

The Aarhus Municipality covers an area of 470.95 km2 (181.83 sq. miles) and has a population of 1.2m. The city proper has 324,330 inhabitants while the inner urban area has 259,754 inhabitants with a significantly large proportion of students at 50,000. The city attracts between 4,000 and 4,500 new citizens annually. A high proportion of these are younger people between the age of 18 and 24 and there is considerable focus on creating employment opportunities to retain a larger proportion of this age group following their education. The result is a city with a ‘village’ feel and a culture of quiet tolerance, where active citizenship and involvement are key values. The city exemplifies all the benefits of devolved responsibility and fiscal freedom that brings government closer to the people. The municipality has the power to co-ordinate economic growth, job creation and training measures while joining up health, social care and welfare programmes; a power that the English regional cities can only aspire to.

The current Mayor Jacob Bundsgaard, aged 38, describes Aarhus as a city that takes on large challenges and is able to find new ways of solving these. He brands Aarhus as “Danish for Progress”. The City Council has 31 elected members with an executive board appointed from all the members of the Council. There are five Aldermen, elected for four years, each of whom lead a municipal department with responsibility for implementing decisions made by the City Council. The average age of the Aldermen is remarkably low; Rabih Azad-Ahmad, Alderman for Culture and Citizens’ Services, is 38 years old and a graduate of the university. There is a high retention rate, following graduation, of the young people who come to the city to study at the university ranked in the European top 20.

Although Aarhus is a ‘young’ city, it is one of the oldest towns in Denmark, with settlements dating back to the late 8th-century. Regular steamship links with Copenhagen began in 1830, and Jutland’s first railway was established in 1862 from Aarhus to Randers. While Aarhus became an important railway hub, the harbour provided a sound basis for commerce, initiating significant industrial growth in the city in the second half of the 19th century, which soon made it Denmark’s largest provincial city. With the establishment of Aarhus University in 1928, the city continued to grow, becoming the most important business centre in Jutland by the 1950s. During World War II, the Gestapo had their Danish headquarters in the city and kept their archives there until they were destroyed during a raid in October 1944. Today Aarhus is Denmark’s second most important centre of research and education.

Aarhus is a walkable city on a ‘human-scale’ with the look and feel of a regional city, surrounded by open country and approached from low hills providing views of the Bay of Aarhus. The primary roads of Grenavej, Randersvej, Viborgvej, Silkborvej and Oddervej all radiate outwards from the original historical centre. The special character of the ‘Island Neighbourhoods’ is created by the consequent relationship of the streets and the buildings to the steep slope of the terrain and the horizontal streets crossing these and connecting the neighbourhoods.

The current Business Plan (2014-17) aims at “creating the best possible environment for Aarhus to continue strong development towards becoming a European knowledge hub for growth – with an environment for urban, commercial and creative innovation”. The city has recognised the need to sustain and strengthen its position in the context of increased national and international competition and is seeking to achieve four ‘primary visions’ in cooperation with businesses, organisations, knowledge institutions and the citizens. The ‘Aarhus Model’ includes a willingness to act on sound ideas even if long-term solutions are not yet visible, with the city’s role as a professional and political entrepreneur translating bright ideas into concrete initiatives.

Aarhus is currently undergoing significant regeneration involving large projects including a new light rail system, a new hospital (the largest in the Nordic Region), the development of new and experimental suburbs and the integration of the harbour into the city. Aarhus is also undergoing a ‘redesign’ on a cultural level having been awarded European Capital of Culture in 2017 (ECOC 2017). The way the city has approached this is an excellent example of good practice in the leadership and governance of the regeneration of urban realm.

The City has named the ECOC 2017 process ‘RETHINK’ (http://www. aarhus2017.dk/en/node/20834), using culture as a tool for social change to reinvent ways of working and living and as a catalyst for regeneration and development. They do not view ECOC 2017 as an event but rather as a process that will challenge and change, stimulate and strengthen the city and its region in diverse areas such as artistic, cultural, urban redevelopment, social integration and business and tourism at a national and international level. RETHINK provides Aarhus2017 with the opportunity to create a ‘cultural laboratory’ in the whole region where innovation and alternative solutions can develop and take root. RETHINK is a process of engaging people and institutions, of investigating and investing in new ways of doing things and of fostering creativity, drawing on the enormous reservoir of energy available from the young population and especially the students.

The context for this process is the recent establishment of ‘Business Region Aarhus’, a cooperation between Aarhus and ten neighbouring council districts to coordinate urban development and infrastructure and to ‘join forces’ in day-to-day business when dealing with the national government in Copenhagen. The principle of citizen involvement in all municipal task areas is being adhered to irrespective of which department is responsible for the area in question. This is evident in the project for opening the previously culverted Aarhus River, which runs through the city centre, the new harbour front, the regeneration of the former container harbour, and the development plan for Gellerup and Toveshoj, the mono-functional housing districts from the 1960s’ with 2,700 inhabitants.

The fabric of the city is receiving contemporary interventions in the form of new civic and cultural facilities such as the Moesgaard Museum and the Dokk1 Urban Media Space, both procured through design competitions. The City Council seeks to “go in front” and insists on not letting market forces control developments alone. This is motivated by the recognised need for a framework to be established for creating appropriate and viable mixed-communities, avoiding the problems of monofunctionality that is now having to be reversed at Gellerup. Aarhus City Council is encouraging active economic growth, both on a strategic and individual basis, providing advice and guidance to small and medium sized enterprises with a high level of knowledge transfer Vote online at www.academyofurbanism.org.uk The Academy of Urbanism 2014 from Aarhus University. Various incubation opportunities, both publicly and privately funded, are being created in former industrial buildings with affordable rents and with an emphasis on stimulating creativity. One example is the Institute for (X) (http://www.institutforx.dk/), an inspirational experimental and creative business aimed at encouraging young and very young entrepreneurs, housed in a converted, former Custom building and part of a cluster of creative and cultural enterprises in the former Godsbanen Freight Yard.

The City made a commitment in 2008 to become C02 neutral by 2030. ‘Go Green with Aarhus’ is the online site that communicates the public/private initiatives being taken (http://www.gogreenwithaarhus. dk/en.aspx). The decision to build a bio-fuel combined heat and power station is a major step forward towards the City Council’s CO2 neutral target. District heating fired by a mix of fuels means that supply can be based on a range of different fuels or sustainable energy sources and multiple vendors and will be completed in 2016.

Danes are apparently amongst the happiest people on earth and Aarhus has become known as the ‘smiling city’, two not insignificant factors in the sense of community, health and wellbeing that is evidently a strong part of the civic culture of Aarhus.