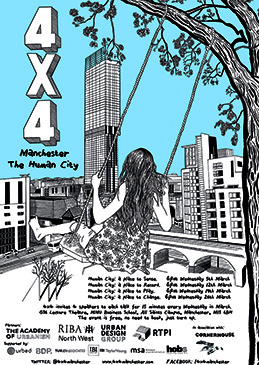 Join the Academy and a host of local partners for the Manchester 4×4 Series – A Human City: Sense / Record / Play / Change

A Human City will look at our urban environments through the perspective of the real human experience: the overarching, never-ending, ordinary, every-day, every-person narrative that has become overshadowed in recent times by the smart city, the sustainable city, the technological city, the connected city, the living city.

The series aims to stimulate debate and discourse on what it means to be a human responding and adapting to the changing conditions of our city environments. We will prompt people to think differently about their own discipline, be that architecture, art, planning, urbanism, or music.

An eclectic mix of speakers has been lined up to share opinions and stories on our four themes, including: an academic whose research is on smells in the city; a composer interested in navigating with sound; an artist who draws maps of the human body; a co-founder of Matrix – a feminist design coop; and an architect-cum-restaurateur…and many more!

With the overall theme of Human City, there are then 4 sub-themes, each with 4 speakers talking for 15 mins:

RSVP: no need to book – simply turn up on the night!