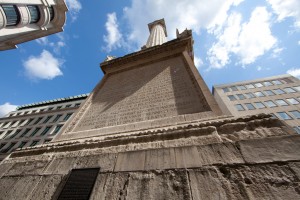 On 21 June, the Young Urbanists (YUs), The Architects’ Company, and YU Sponsors Space Syntax came together for a lively evening of debate on the subject of resilience in the UK capital. Building on The Architects’ Company event series on the Great Fire of London – which is commemorating its 350-year anniversary this year – each organisation did a rapid-fire presentation on the theme of resilience through the lens of London since the Great Fire.

Nicholas Francis (Associate at Space Syntax) presented on the work carried out by Space Syntax in an effort to prepare cities for future scenarios by analysing both the current spatial qualities and the various frameworks that support it, and then ‘stress testing’ these through modelling how distinct changes effect the balance of cities. Using the example of a flood defense breach in London, Nick showed the effect this would have on the transport networks of the capital, but furthermore, how this would effect the interaction of communities by pushing main transport routes to the periphery of the city.

Peter Murray (Director of New London Architecture and Master of the Architects’ Company) presented a whirlwind tour of the 350 year history of London’s resilience, taking us from its rapid rebirth after the Great Fire of London, right through to how the square mile’s spatial properties allowed it to provide a safe haven after terrorist attacks in the mid 70’s, and finally to the financial regeneration causing the growth of the construction industry during and after the recession.

Dima Zogheib (Senior Landscape Architect at Arup) presented her work on the City Resilience Index with Arup, an initiative that encapsulates all areas of a cities infrastructure and analyses the individual level of resilience of a space or place through the perspectives of ecosystem, leadership and strategy, health and wellbeing, society and economy. This provides a more qualitative approach to dissecting both current and future areas for improvement and focus.

Lively debate was ignited during the discussion session as many of the audience questioned what defines resilience; Dima suggested that her work with Arup has proven resilience should be a whole ecosystem affair, from the effectiveness of infrastructure down to the happiness of an area’s residents, while others suggested it is more to do with how a metropolis deals with disaster or upheaval.

Other audience members stressed that the issue of resilience is usually only ever tacked after a ‘shock to the system’, and that the real issue is preparing for it, very much in the way that Nick’s talk highlighted the ways in which Space Syntax tries to model future scenario’s, we also need to keep in mind the broad experience provided by history, and most importantly, try to to incorporate this into our built environment.

Many thanks to Space Syntax for kindly hosting the event.

And thanks to Young Urbanist member Simon Banfield for kindly supporting the event as Project Lead and composing this event summary.