In November this year the Academy publishes its third book with Routledge written by Academicians David Rudlin, Rob Thompson and Sarah Jarvis. Urbanism is a compendium of the 75 finalists for the Academy’s awards between 2009 and 2013 together with essays that draw out some of the lessons from this incredibly diverse list of cities, towns, neighbourhoods streets and places.

One of the themes to emerge is gentrification; places that were once run down, which are then ‘discovered’ by creative people and businesses and which then become so popular that the local community (and indeed the creatives) are squeezed out. For the Academy this poses some difficult questions about whether our awards are recognition of the strength of the original community, the creative transition period or the gentrified end point?

Nowhere are these issues more relevant than in London’s Brixton neighbourhood; here is an extract from the book….

Urban 75, a popular online forum based in Brixton, says on its site that there are some who worry that a ‘slew of swanky bars and restaurants is threatening the very essence of Brixton’. They go on to say, however, that ‘it’ll take a lot more than a few sushi bars to kill off the colourful, exciting and unique character of Brixton’. This, it seems, goes to the heart of the question about what makes a good neighbourhood. Brixton is now the trendiest of south London neighbourhoods with a ‘boho’ arts scene, farmers’ market and, yes, plenty of sushi bars, along with restaurants of just about every other nationality. It was also one of the first places to apply the Transition Towns philosophy at the neighbourhood scale, hosts one of the country’s largest urban green fairs and has adopted the Brixton Pound as its local currency, all the things that secures a neighbourhood a nomination in The Academy of Urbanism Awards.

But there is another side to Brixton and one that has perhaps given it an even better claim to the title of great neighbourhood. This is the Brixton where the community has come together to battle poverty and poor housing, gangs, riots and rampant street crime. It is the resilience and character of this older community that makes Brixton a great neighbourhood rather than the trendy bars or even the Brixton Pound. We hope that Urban 75 are right when they say it is not under threat. 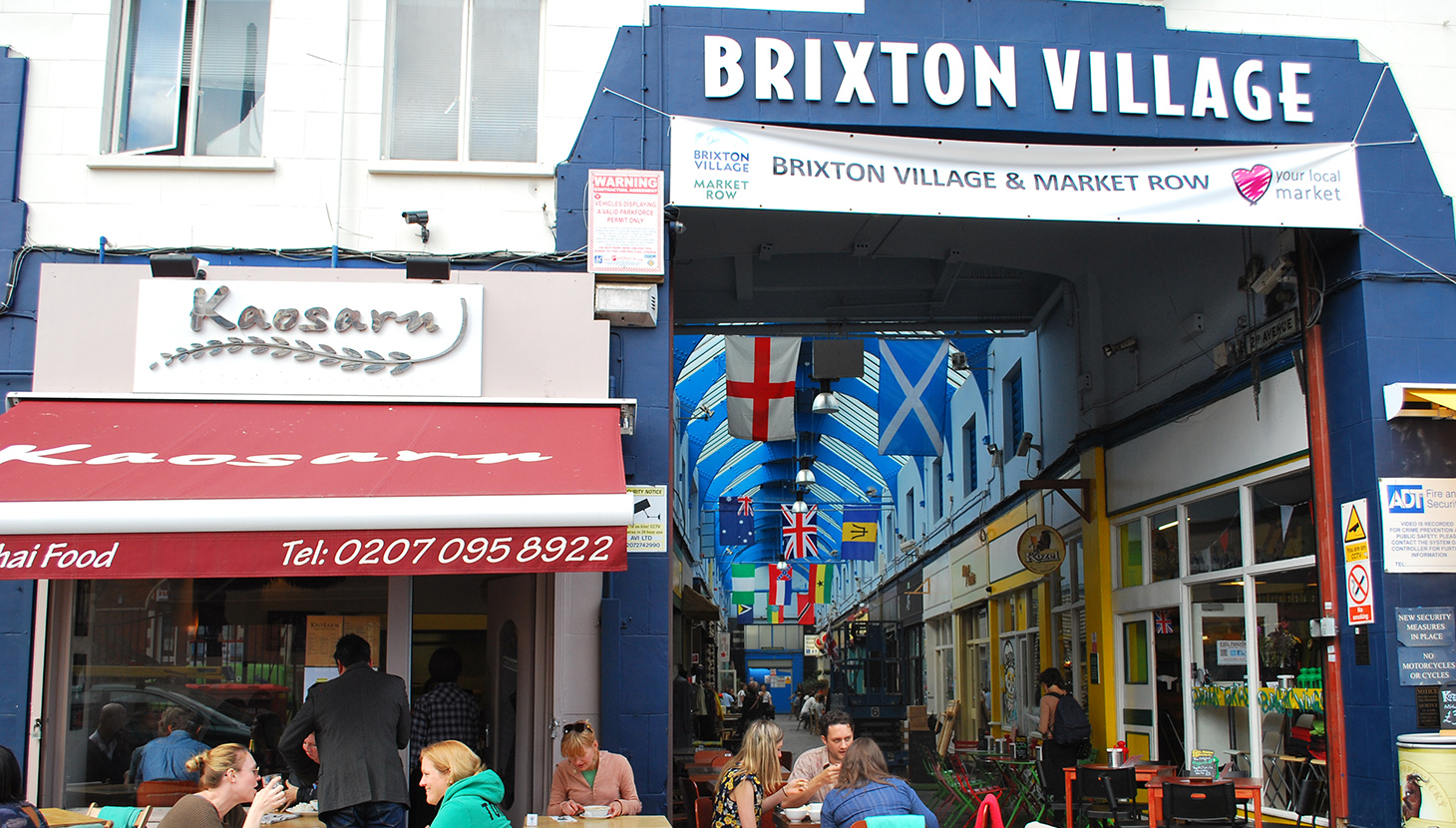 The new wave of delis and restaurants in Brixton Village

In 1948 when the ship the Empire Windrush docked in London, it bought the first 492 immigrants to the UK from Jamaica. The group was initially housed in a shelter in Clapham and instructed to sign on at the nearest labour exchange on Coldharbour Lane in Brixton. In the years that followed this seed community started to move into the surrounding streets and, as further immigrants came, they made Brixton into the first and largest Caribbean community in the UK. They came into a Brixton ravaged by war and poor housing.

Most of London’s local centres grew from villages absorbed into the growing city. Brixton is the exception. It was an area of forest that remained undeveloped until relatively late in London’s history. Not until the construction of Vauxhall Bridge in 1816 did ribbon development start to stretch along the Clapham Road and the Brixton Road (both of which are Roman in origin). However, it was the opening of the Chatham Main Line railway in 1860 that caused the area to develop.

Indeed, the next 20 years saw a huge building boom from which Brixton emerged as a fashionable middle-class suburb. In 1877 James Smith of Tooting used his racecourse winnings to build the UK’s first purpose-built department store in Brixton, which he called Bon Marché after the world’s first department store of the same name in Paris. Two further department stores opened and soon Brixton was rivalling Oxford Street as a shopping destination. Electric Avenue opened in 1880 as an arcaded shopping street, the first in London to be lit by electricity. 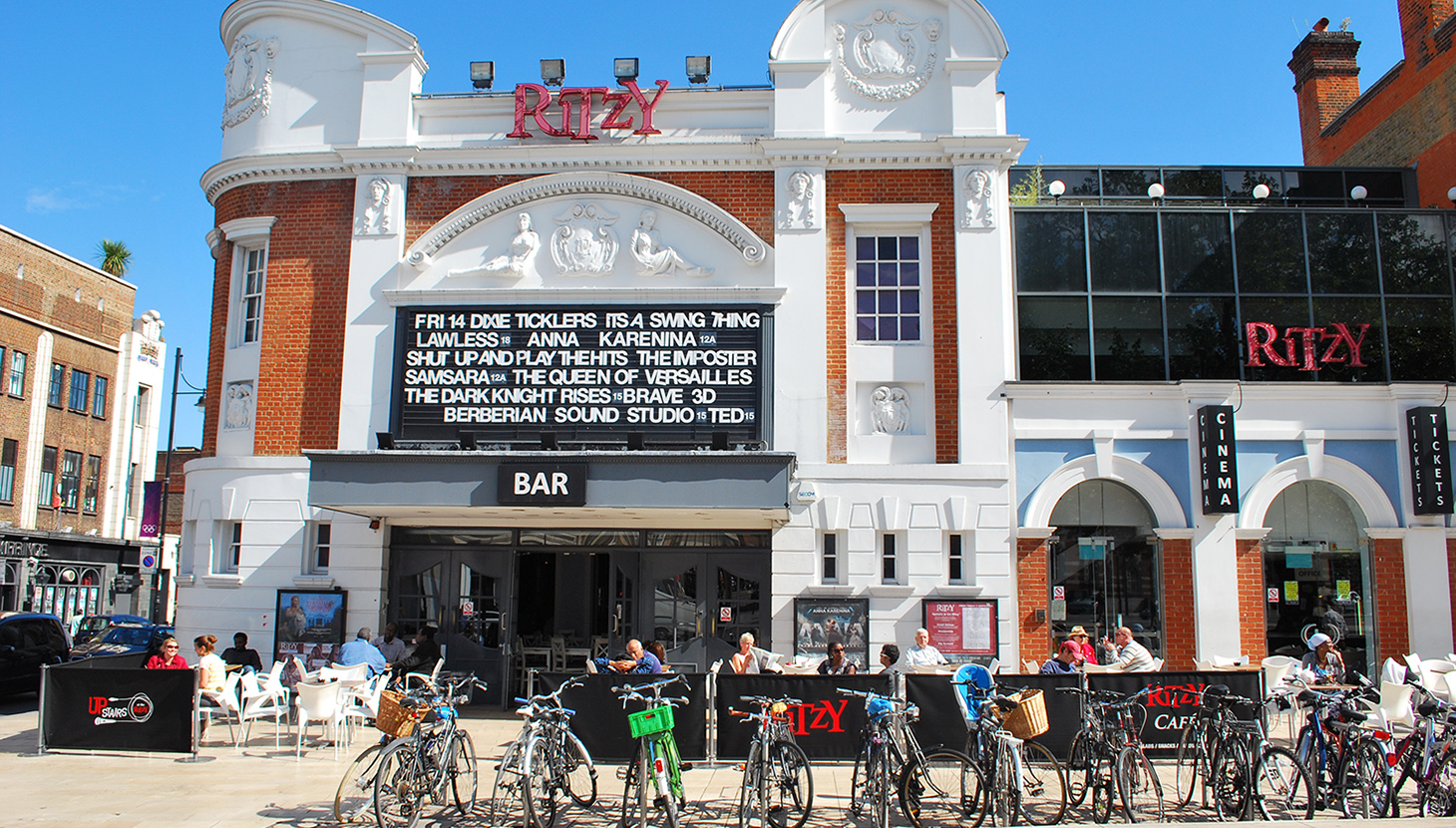 The middle classes were not to stay long. By the end of the 19th century it had become a much less genteel place, known as home to entertainers like Dan Leno and even Charlie Chaplin for a time. Decline in the inter-war years led to the middle-class villas being subdivided into bedsits. During the Second World War Brixton was heavily bombed and in the post-war years, as the leases on its houses fell in, the area was subject to extensive slum clearance. Eventually, this led to the construction of six large council estates that were to accommodate a large part of Brixton’s population, particularly the Caribbean community.

This community brought with it some of the less pleasant aspects of Caribbean life. Brixton became the base for two notorious Jamaican ‘Yardie’ gangs, the Firehouse Posse and the Kartel Crew, gaining a reputation for street crime and drug dealing, and this gangland culture has been part of Brixton ever since. As recently as 2012 the BBC called Brixton’s GAS the most notorious gang in London. At the time GAS was at war with Brixton’s other gangs, The Murderzone, Poverty Driven Children and Organised Crime and it was estimated that half of all shootings in the capital were gang related. 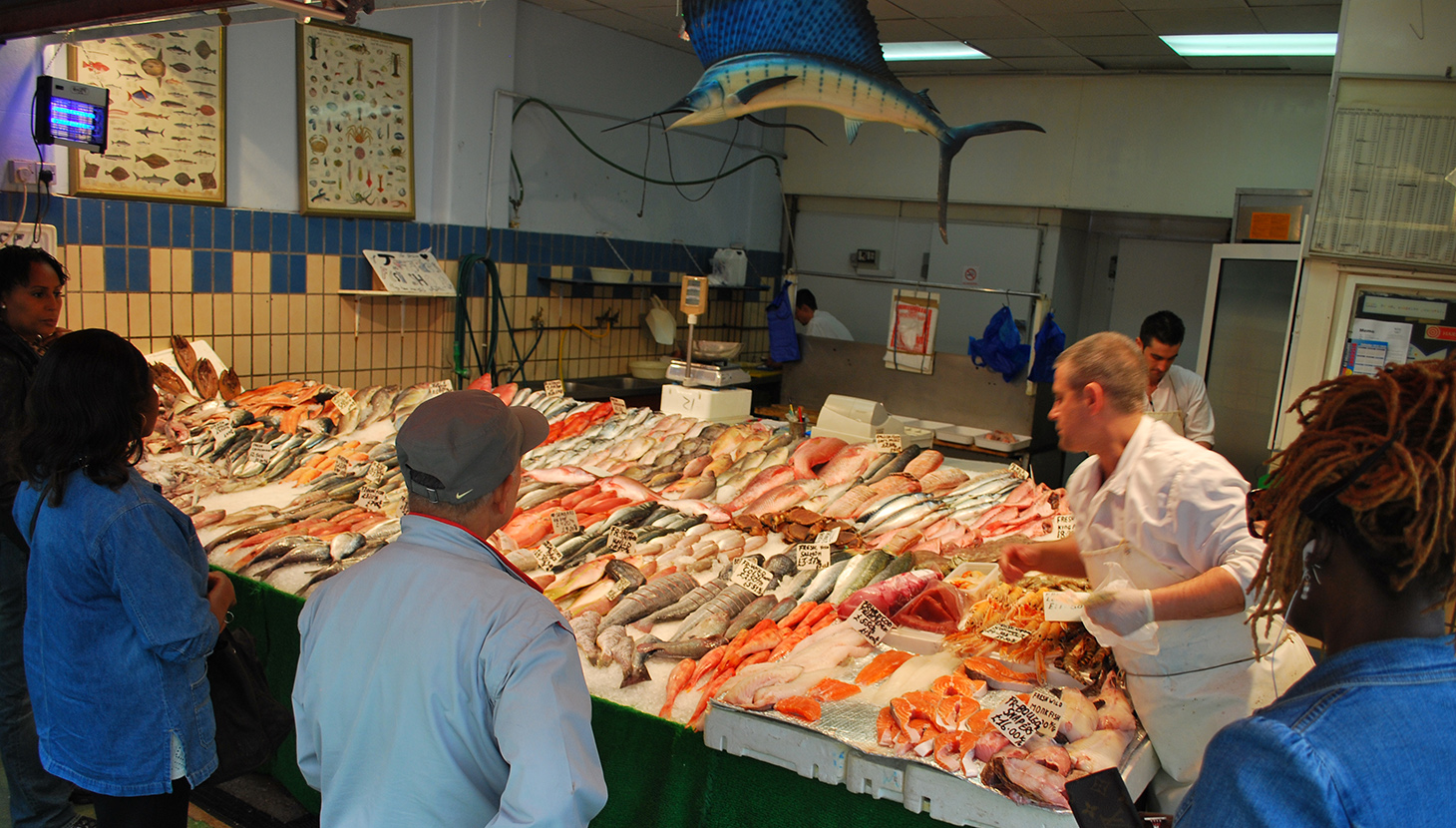 Back in April 1981 a similar surge in street crime in the Brixton area prompted the Metropolitan Police to mount an exercise code-named Operation Swamp (which was presumably to be drained). Over the course of six days they stopped and searched almost 1,000 people, mostly young black men. On the seventh day the area erupted into some of the worst rioting seen in London for years. It is estimated that around 5,000 people took to the streets and there were 324 injuries, 279 of which were to police officers, who also saw 56 of their cars burnt out. The rioting spread to 12 other towns and cities, including Toxteth in Liverpool and St Pauls in Bristol. The focus of anger was the ‘sus law’ introduced by the Conservative government that had given police powers to stop and search individuals based only on reasonable suspicion that a crime might have been committed. This was seen as a measure to persecute the black community, a view shared by Lord Scarman, who chaired the public enquiry into the riots. The sus law was repealed within months and the Scarman Report led to new codes for police behaviour in the Police and Criminal Evidence Act 1984 and also the establishment of the Police Complaints Authority in 1985. 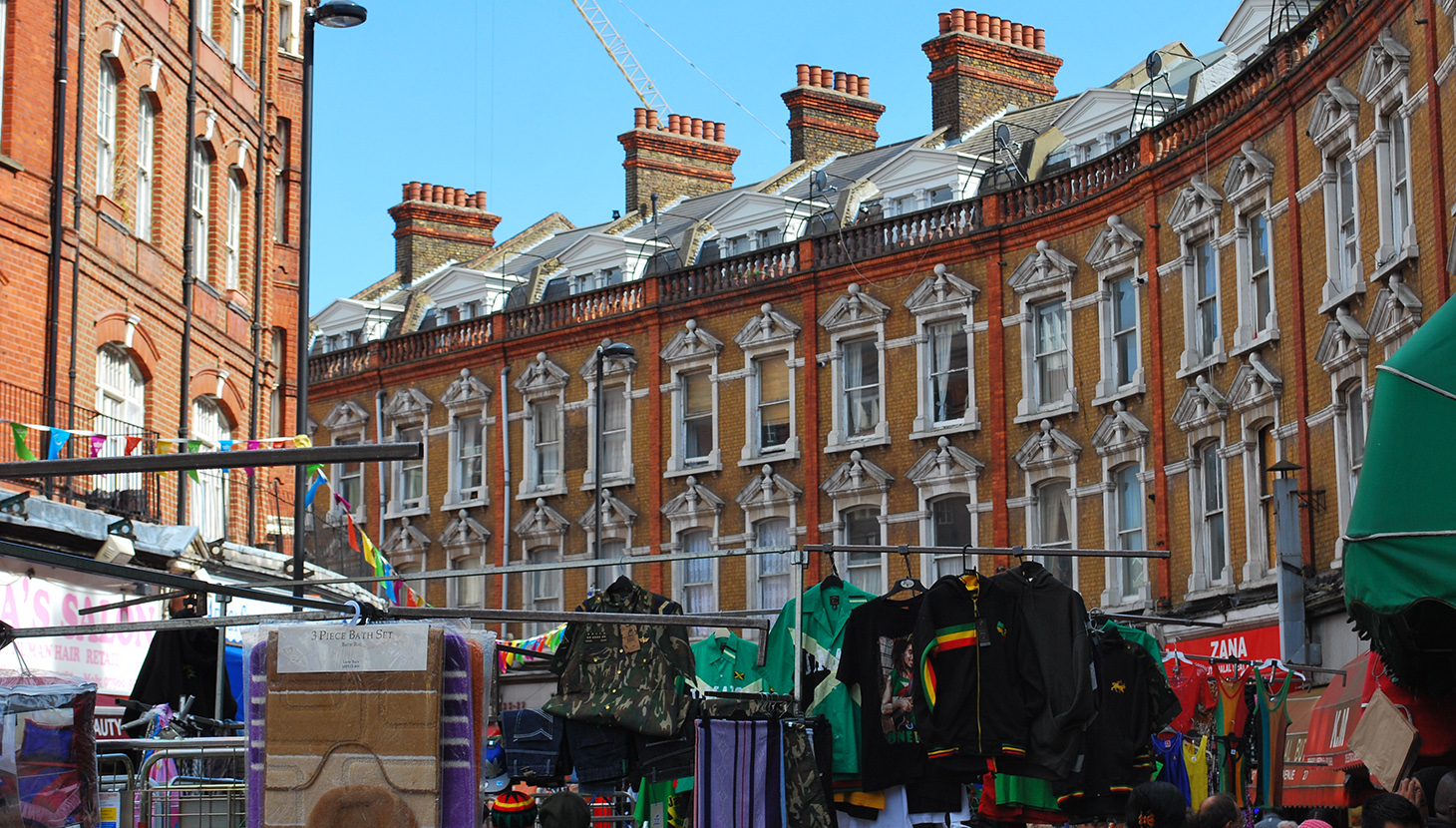 These were not the last riots in Brixton. A riot took place in 1985 triggered by the accidental shooting by the police of Dorothy ‘Cherry’ Groce. There was further rioting in 1995 and the area did not escape the London-wide rioting in 2011. The 1995 riot was also triggered by a police shooting; however, a quote by a local resident in the radical magazine SchNEWS suggested that the problems went deeper: ‘Local people are not only pissed off with the death of Wayne Douglas but the whole gentrification of Brixton. Council houses and houses occupied by squatters are being sold off and local pubs like the Atlantic, traditionally run by black people, was opened last week by yuppies as The Dog Star. In anger this was smashed, looted and burnt out. The £33m City Challenge development including CCTV is only of benefit to big business not local stall-holders’.

Yuppies were, of course, the target of much of the radical politics of the 1980s and 1990s. This does, however, bring us back to where we started. The people of Urban 75, who were not worried by sushi bars, are more likely to have frequented The Dog Star than the Atlantic. Today the players in the story are hipsters rather than yuppies but the narrative is the same. Young professionals are attracted to places like Brixton because of its grit and authenticity. They are keen to protect its diversity and culture but their spending power and tastes inevitably damage the thing that they found so attractive. Local shops become sushi bars, house prices rise and the area becomes gentrified. Brixton has not quite been changed to the extent of other hipster enclaves like Hoxton and Shoreditch because of the presence of its large council estates. However, London is a city where the enclaves of wealth have grown and merged, leaving islands of poverty. The righteous indignation of Brixton’s black community may not be as visible as it once was but that doesn’t mean that it has dissipated.

Is Brixton therefore a great neighbourhood? Whether the members of The Academy of Urbanism who voted it as such did so because of its working-class Caribbean roots or its more recent gentrification we will never know. The tensions between these communities are, however, playing out across London as the city’s economy and property market overheat. If Brixton can find an accommodation between these old and new ideas of what makes a great neighbourhood, then it really will have discovered something significant.

Urbanism is published by Routledge and available from academyofurbanism.org.uk