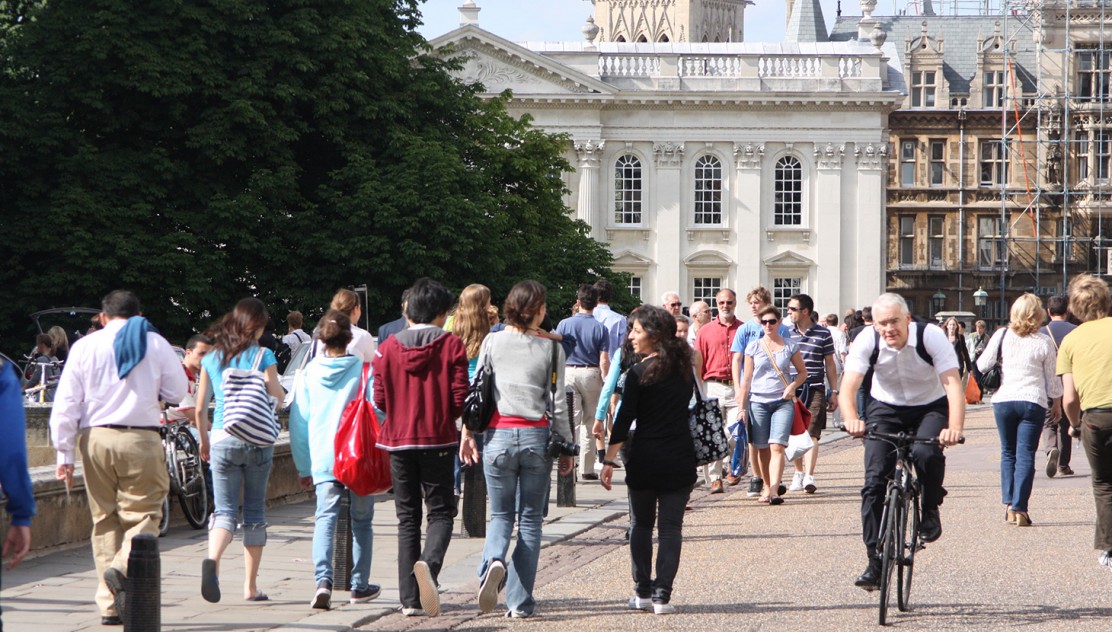 A review of an Academy of Urbanism event, hosted by the Cambridge Architecture department on 12th November 2015, organised by the Dutch Architecture practice Mecanoo Architecten and the Cambridge based property advisory business Creative Places. Chaired, Kieran Perkins of 5th Studio.

This evening forum, well attended by Cambridge urban decision makers and urban practitioners, was held to encourage a broad assessment of how urbanism can enhance innovation.  The event turned a focus on Cambridge to ask how the structure of the city may to historically have assisted its exceptional creative output.  Also explored, pertinent at this time of significant growth for this focus city, was what needs nurturing during growth to keep innovation healthy and how this place characteristic might be enhanced by good city design.

An opening presentation put forward the proposition that the dense core of historic Cambridge nurtures creativity. It does this in many ways, but notably through close proximity of ideas via a clustering people.  This clustering effectively means, placing people with ideas and inquisitive minds together in a manner that promotes dialogue.  It was noted particularly that Cambridge exhibits a close juxtaposition of creative minds from varied disciplines, allowing the potential for exchange across exceptionally diverse fields. For instance a neuro-scientist researcher may benefit from a conversation with an artificial intelligence engineer or even a swarm ecologist.  There is no zoning by discipline in historic Cambridge.

Clustering is only one aspect of how a place needs to be built for idea exchange however.  It is primarily the social structures of a city that promotes dialogue, leads to exchange of original thought and consequent to this innovative research.  One speaker illustrated this by reference to James Watsons book The Double Helix : A Personal Account of the Discovery of the Structure of DNA.  The nobel prize winning scientist, talks about the importance during their work on the double helix of walks along the river to relax the mind after period in the lab and the social encounters they frequently enjoyed in the city’s restaurants.

How can cities promoting innovation as a key aspect of its core identity nurture this social interchange?  Cambridge has an exceptionally rich social network designed for promoting conversation and play, which is built around centuries old dining and living through quasi-monastic college structures.  This can’t be replicated easily, however what is scalable and repeatable is the urban context in which the Cambridge colleges exist: the streets, social venues and green spaces tracing around the college courts.

Adam Peavoy suggested that added to social interaction to promote exchange of ideas via social interaction, the capacity of a city as a place to play also needs to be considered in the context of innovation. In particular he referenced a study on the importance of play to innovation by emeritus Cambridge professor Patrick Bateson, a behavioural ecologist.  Bateson identified a particular form of play, ‘playful play’ as worthy of particular attention in relation to its support of innovation behaviour.  Bateson defines playful play as being:

‘…accompanied by a particular positive mood state in which the individual is more inclined to behave (& in humans, think) in a spontaneous and flexible way’.

If the city can be seen as a place to relax and play (in a ‘playful manner’), innovators can perhaps benefit from this through influence on their state of mind.  To benefit from the playful states a city like Cambridge can create in the minds of innovators, one would suspect that the ease and frequency of contact citizens can have to with social and green infrastructural aspects of the city will be crucial.  Such contact surely needs to be closer to daily than weekly.

Creating mixed use, socially stimulating streets where interaction can generate a playful state in those experiencing it is very challenging in the innovation zones we seem to creating in our current planning and development contexts.  In Cambridge, there is a very good aim to create a socially stimulating environment in the North West Cambridge expansion zone, however there are plenty of other employment zone clusters developing, or needing renewal, in the city that are not attempting this.  It must be noted too that is matter not purely a planning problem, but a development paradigm too that needs to be challenged.  For example, in the bio-medical campus, to the south of the city, new tennants Astra Zeneca say ‘they are close to who they need to be close to’, however this is looking at innovation needs from a purely physical proximity perspectives and not factoring in social or play aspects that are required by the innovators themselves.

The context for innovation in science and industry cross over, has perhaps never been more aligned with good urbanism.  Jonathan Burrows presented current thinking on ‘ Open Innovation’ as a model for industry R&D.  Open innovation he explained is characterised by more business openness in regard to research and development than was the case in the past.  It recognises that the flow of knowledge in and out of companies is ultimately more economically rewarding than when the same is developed in a protected, or ‘closed’ system.  This is seeing changes in architecture; see Astrazeneca in Cambridge or Samsung in Silicone valley, where research buildings are embracing an open flow people through their buildings.  Equally, Urbanism is impacting on open innovation too.  We are seeing more interconnection and movement between clusters leading to what has been called ‘innovation districts’ by the Brookings Institute.

Cambridge can certainly be seen as an Innovation district. This evening forum highlighted however that the success of historic Cambridge and the known importance of social interaction to play and innovation, could lead to a better blueprint for enhancing a city’s innovation output.  Astrazeneca for instance has made great leaps to invite people into its building to access it’s own social spaces.  Perhaps it is not too far a step to extend this and require the innovators working in such institutes to socialise back out in the city streets.

Some very pertinent questions were raised in the evening’s concluding open discussion.  For instance, can Cambridge extend the city deal to re-designed the major roads between research clusters, like Milton Road and Maddingly road, to slow traffic, improve the pedestrian environment and increase social interaction? Can urban design masterplans ensure a greater integration of arts, perhaps through integrating of arts space as ‘meanwhile uses’ or wrapping of larger institutional buildings with more mixed uses to create better street interaction (perhaps looking at Downing college as a reference for how this can be achieved).  The evening’s chair, Kieran Perkins, left the audience with one thought to reflect on regarding Cambridge growth:  What part of Cambridge do you like the best, how often do you come in contact with it and can more of the city be like this?

The architects for Astrazeneca’s new biomedical campus headquarters have described their building as ‘a seed for better urbanism in science and research parks’.  This may be true, however given the current pace of change in Cambridge seeds like this will soon become surrounded by overgrown and less pleasing neighbours. More positive action, from private and public forces, to urbanise peripheral urban science and research clusters should be encouraged, with the aim to enhance innovation and generate even greater greater economic success.

Adam Peavoy AoU (Mecanoo Architects) presented an introduction to the theme with an overview of stimulators for innovation.  In particular, covering the Cambridge context with a particular focus on the city’s capacity to engender social interaction.

Eric Martin (DM Architects) and Michael Cubey  (Bow Arts, London) presented examples of how they provide for arts studio spaces in different configurations in London, including ‘meanwhile’ uses in premises that have not yet developed full commercial viability in new districts.