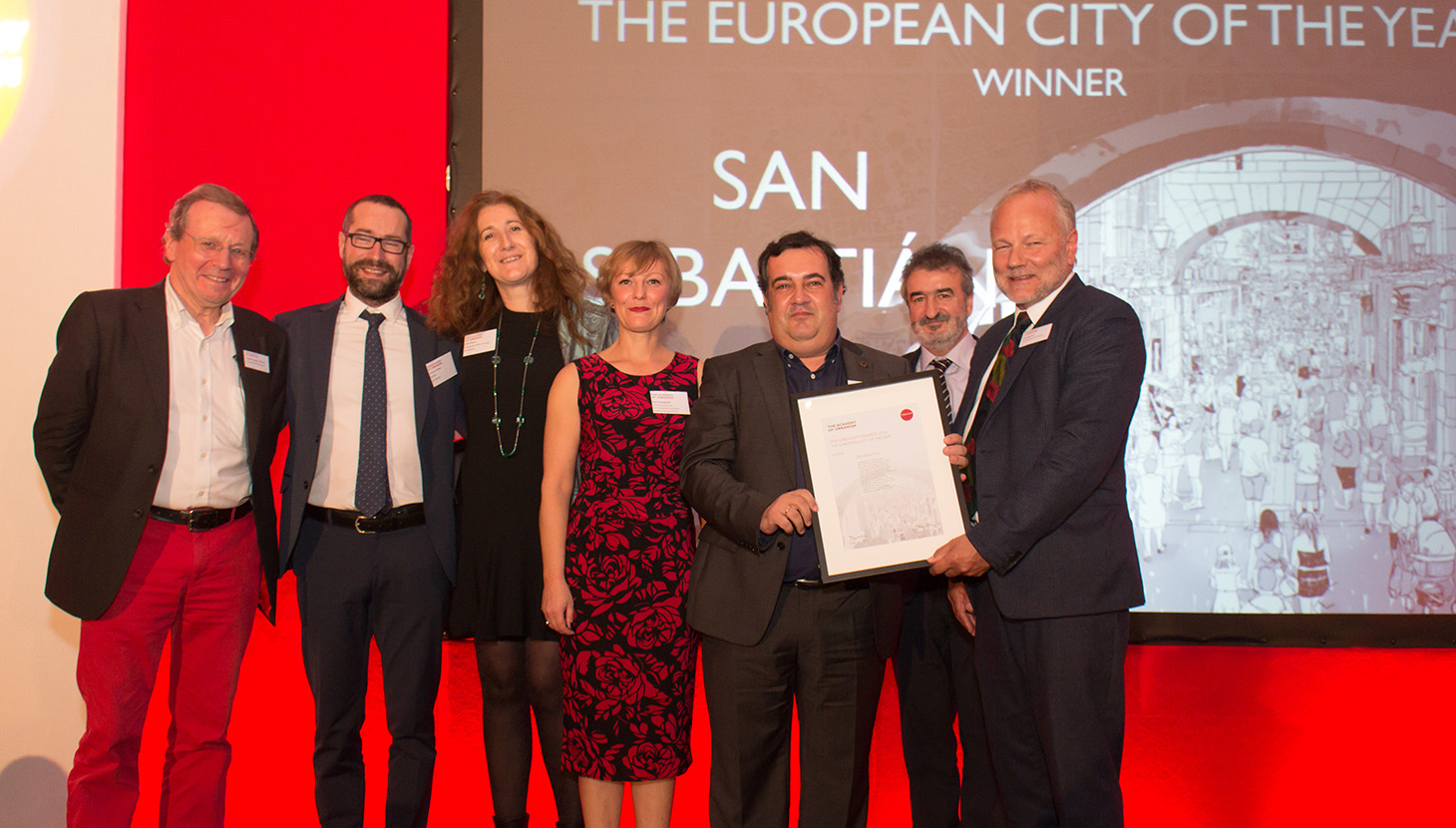 San Sebastian, Spain, was yesterday (Friday 6 November) crowned European City of the Year at the 2016 Urbanism Awards. The Spanish city fought off strong competition from fellow finalists Bologna and Stockholm during a summer of assessment visits and subsequent vote by the Academy. The Vice Mayor of San Sebastián, Ernesto Gasco, collected the award along with colleagues from the city council and 2016 Capital of Culture delivery team. 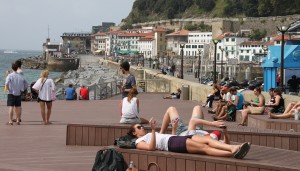 San Sebastián, winner of The European City of the Year 2016

Academy judges were impressed by how the Basque city is strategically building on existing strengths in technology and higher education, and on its title as arguably the ‘world capital’ of gastronomy. Alongside its forthcoming role as 2016 European Capital of Culture, the city is sparing no effort to deliver its citizens an even greater quality of life and ‘harnessing waves of people energy’ to promote tolerance and coexistence.

Ernesto Gasco, Vice Mayor and Councilman for Economic Promotion at San Sebastian City Council, said: “The city is truly excited and honoured to have won this prestigious award. Being European City of the Year in 2016 will add an extra-special dimension to our year as European Capital of Culture, and we look forward to working closely with the Academy throughout 2016 and beyond.”

Steven Bee, chair of the Academy, said: “San Sebastián makes the most of its physical and cultural setting. It is using its relatively high level of autonomy to promote greater equality among citizens and an accessible and attractive public realm. To have achieved this following periods of economic uncertainty and social unrest is particularly relevant to other places.”

Elsewhere, winners were equally jubilant. Frome in Somerset, beat off strong competition from Halifax and Margate to win the Great Town award. On Frome, Tim Challans, lead assessor of the Great Town Award, said: “We were particularly impressed with the way in which Frome Town Council has reinvented local governance and encouraged partnerships with other local authorities, local communities and entrepreneurs to create a progressive, prosperous, environmentally sensitive and caring market town for the future”.

The Old Town, a coastal neighbourhood in Hastings, picked up the Great Neighbourhood award. On its win, Richard Guise, lead assessor, said: “Underlying its successful transformation is a consultation process and partnership with the community, especially a number of neighbourhood associations, resulting in an increasing number of people choosing to live and work in this stimulating and distinctive place.”

Oliver Plunkett Street in Cork walked off with the Great Street award. Geoff Haslam, lead assessor for the award, said: “this street celebrates the diversity of a shopping street in a refreshing and focused way”.

Finally, the Peace Bridge / Ebrington Square in Derry~Londonderry picked up the Great Place award. Academy judges found that the combination of this magnificent bridge and the re-purposed square have jointly generated a new space full of optimism and reconciliation. Nick Childs, lead assessor from the Academy, said: “Now this great place is used by the whole community for an extraordinary range of events and spectacles.”

Speaking about the transformational work carried out by all 15 finalists, Steven Bee said: “Our finalists, this year as every previous year, are places that offer evidence of how great places evolve from the efforts of their citizens, institutions and enterprises. The assessments on which votes are based provide a growing archive of great urbanism, and our annual awards ceremony is an opportunity to celebrate the achievement of people and places. The final vote of members of the Academy determines the winner – the place from which we believe the most can be learned. However, The Academy of Urbanism celebrates the achievements of our all our finalists and the lessons they offer to other places seeking to emulate their success.” 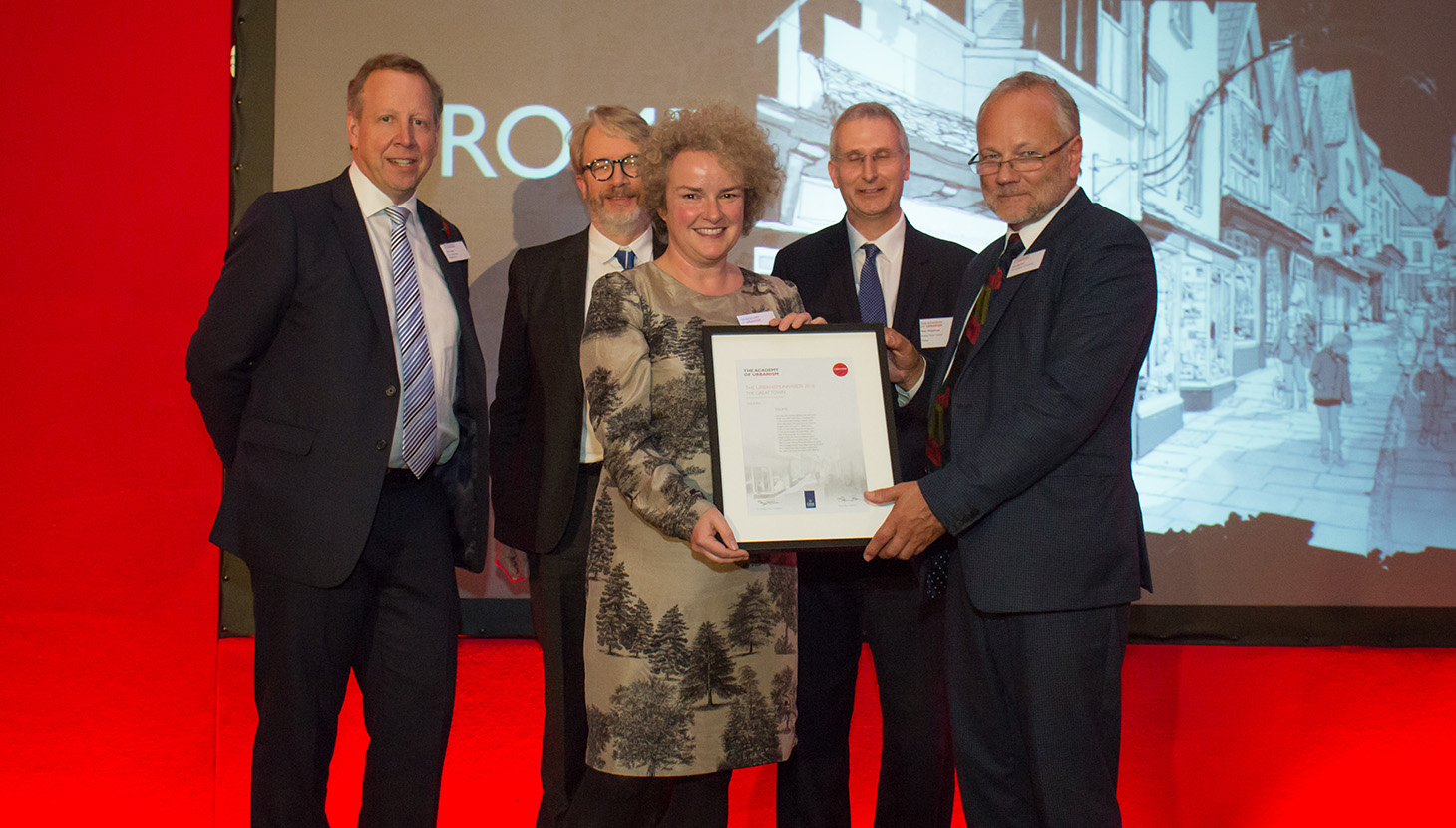 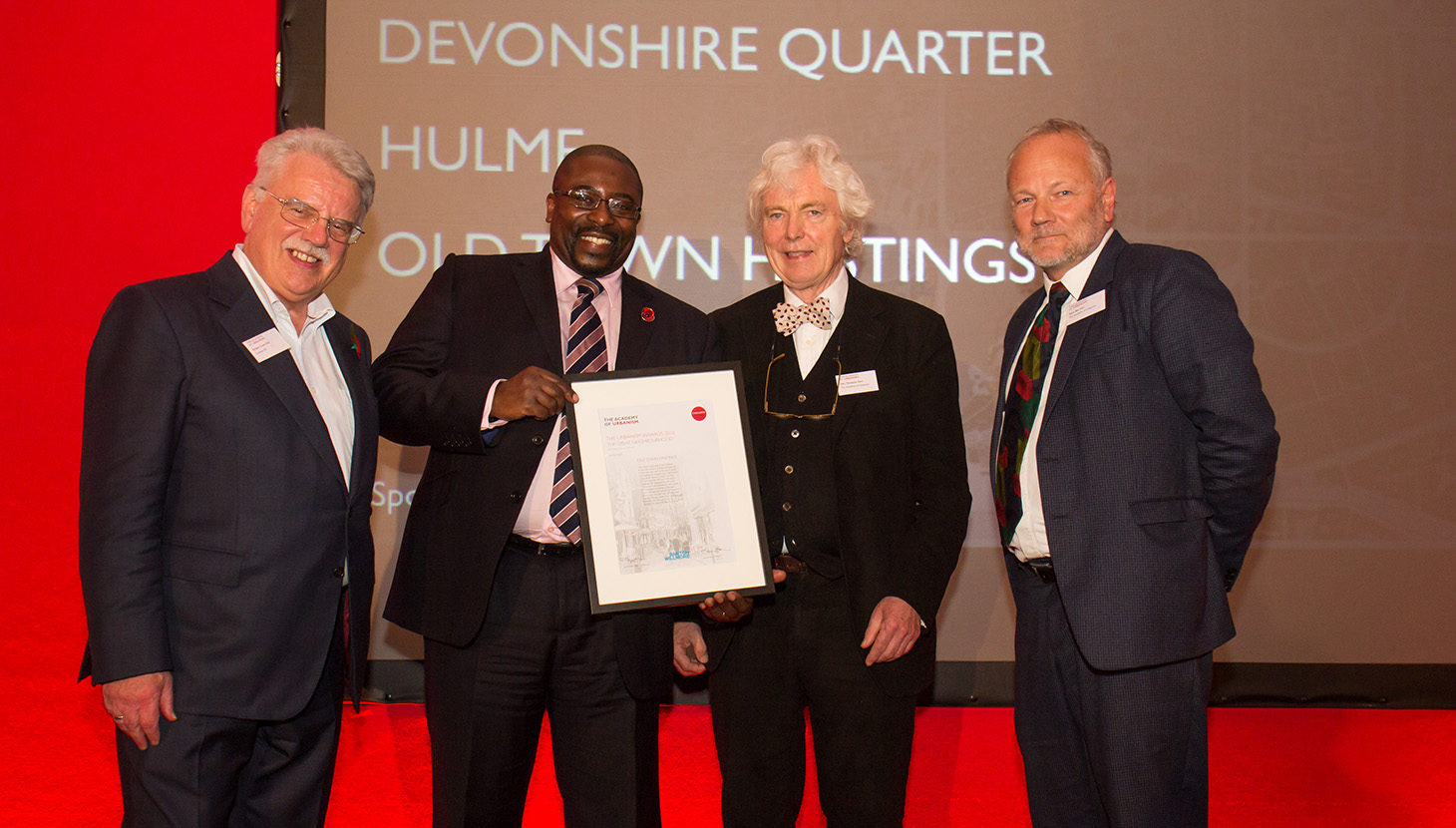 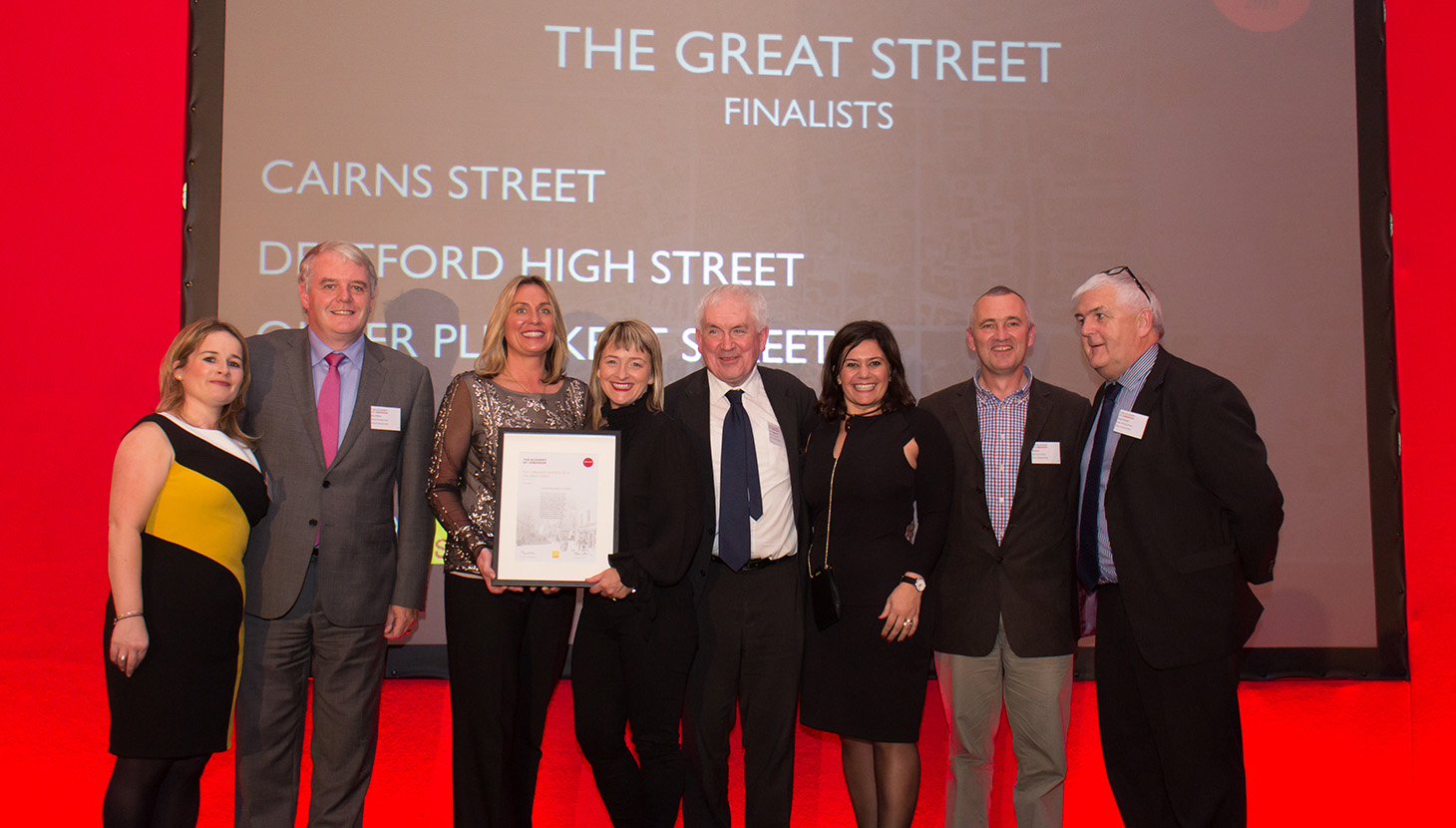 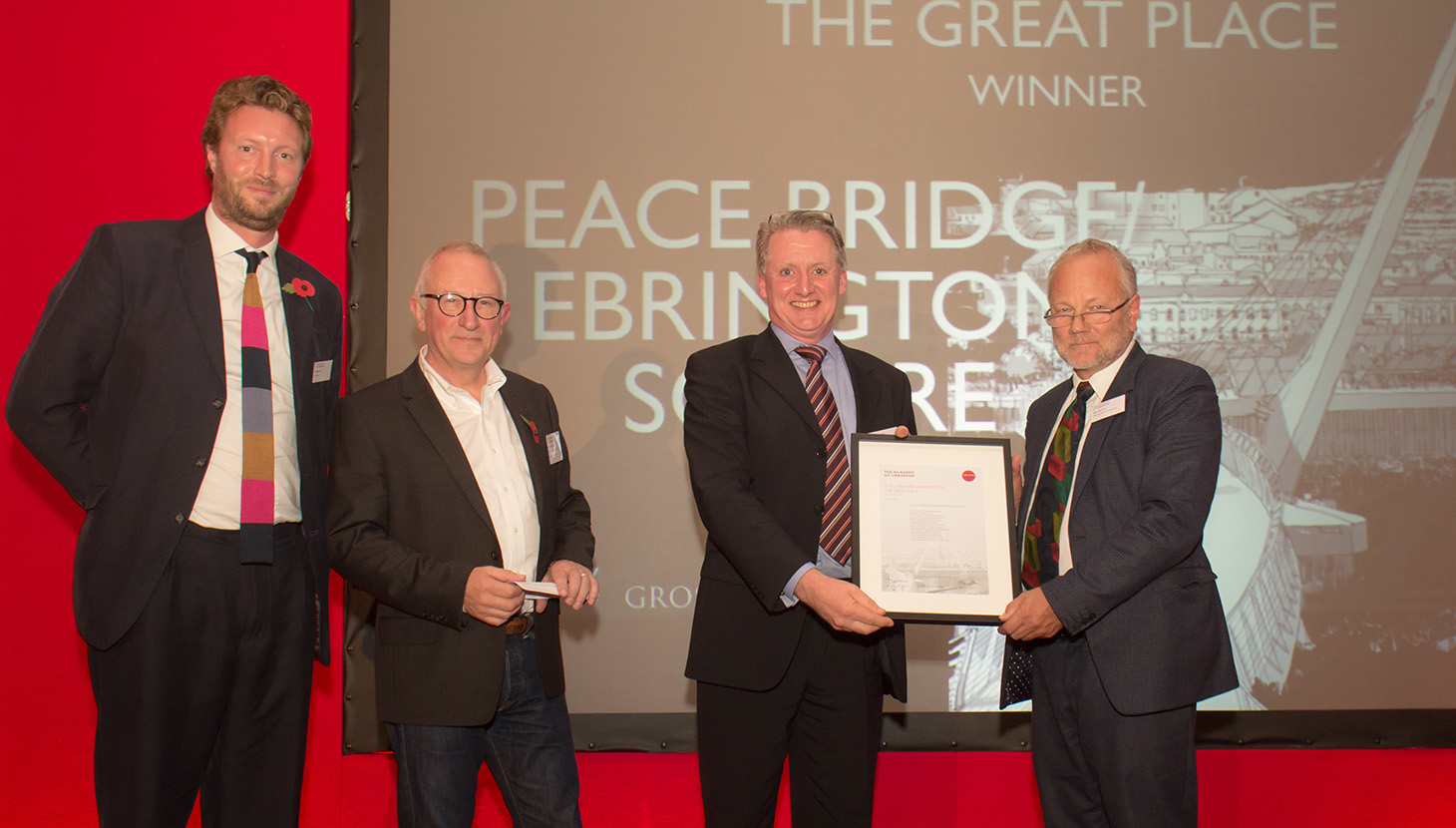 The Academy was formed to extend urban discourse beyond built environment professionals, and to create an autonomous, politically independent and self-funded learned voice. We aim to recognise, promote and learn from great places.