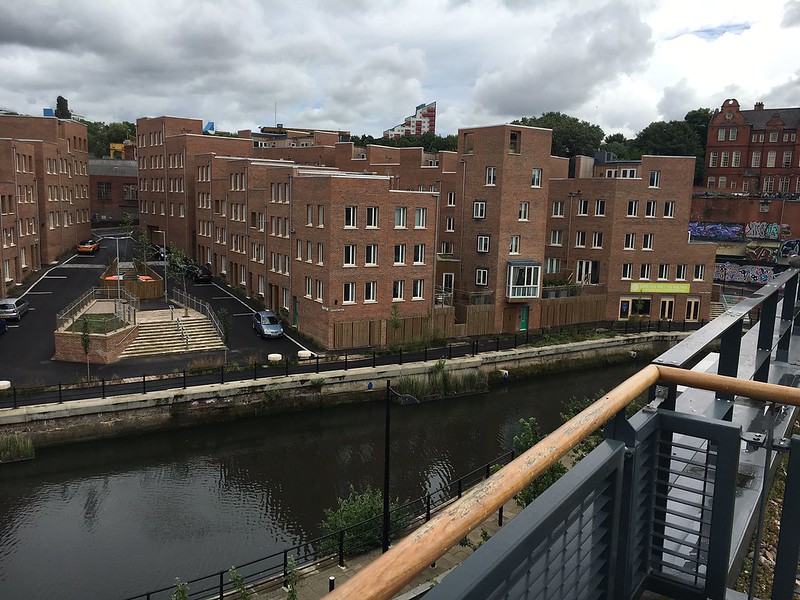 1. Ouseburn illustrates that a strong neighbourhood can be created without imposing a rigid planning framework and through the long-term efforts of individuals and entrepreneurs supported by an innovative approach from the local authority.

2. Quality urbanism is not necessarily neat and tidy urbanism and the neighbourhood of Ouseburn has been allowed to develop organically, with appropriate interventions to support it. In doing so it has evolved as an area that is both desirable and attractive to live and work in, from the conversions of older buildings and social housing to the highly successful Malings private sector housing.

3. Successful regeneration takes time and this has been a slow burning project – 30 years and counting – that has created a number of interrelated and sustainable communities.

The Ouseburn neighbourhood is very close to the centre of Newcastle and the world famous Byker housing estate, associated shops and transport routes. The Ouseburn is a tributary of the Tyne and along its banks were former coal wharves and ceramics and glass manufacturing. It is now a Newcastle wide destination for its pubs, music venues and visitor attractions. The green wedge of the Ouseburn valley and its distinctive topography make it an oasis in the city and it has been identified as one of the 10 best places to live in Britain. Three high-level rail, road and Metro bridges that together create a stunning feature and emphasise the topography of the valley, dominate the urban landscape. It is part of the industrial landscape of the city and contains mixed uses of small workshops, artist studios and galleries and small-scale offices plus housing. Within this are major scrap metal and timber yards that not only serve to retain its industrial feel but also are not under any pressure to move. The City Council feels that they are part of the economy and character of the area and, if you want to live there, you have to accept the issues raised by these uses.

The neighbourhood is largely made up of business uses but there are residential parts of which the most notable is the Malings, a private sector development comprising a mix of well designed units including two 5 storey tower houses. It is not cheap housing but is very popular and when marketed was largely sold off the plan to owner-occupiers. It has also won architectural and housing awards and is unique within the housing mix of Newcastle. In addition there are residential conversions of former industrial buildings, some well designed social housing and a lot of pressure for student accommodation; which NCC is finding difficult to resist.

Although the resident community in Ouseburn is relatively new there is a strong community spirit emerging and, along with local businesses (many of which are in the creative industries), there are a number of community based initiatives including a two day annual festival, litter picking and landscape maintenance. The Malings housing has communal planting areas and holds regular residents activities. There is an historic boat club that is a key stakeholder in the Valley, but it is also responsible for Lime Quay, one of the poorest managed areas on the River Ouseburn where they maintain their boats.

There is considerable evidence of investment in the local economy. It has a mix of small industrial, commercial and creative industry uses including the Council’s small units in the former Ouseburn School, Albion Row now the i4 Enterprise Centre and the contemporary Toffee Factory development; a mix of small office/studio spaces with common areas for occupiers. There are both long established and newer artist studios, commercial galleries including The Biscuit Factory, Seven Stories National Centre for Children’s Books and the Ouseburn Farm both of which have many educational visits, many activities for young people, and a strong social mix in the Malings. It is largely a working neighbourhood and the daytime local population is essentially the people who work there or are visiting, rather than permanent residents, but more housing is proposed for example on the difficult to develop Lower Steenberg’s Yard, particularly after the proven commercial viability of the Malings which is now in its final phase of development. There is high demand for new owner occupied housing in the area in a generally patchy local housing market.

There are still a significant number of vacant sites and buildings, but new uses emerge to reflect contemporary needs and demands whilst enhancing the quality of the area. The Malings and the Toffee Factory are both examples of successful contemporary interventions in an historic urban landscape. The area is distinctive for its topography and river; the appeal of the social/workshop/industrial uses and its unique features such as the Victoria Tunnel and Seven Stories. It is a destination for a wide range of people in Newcastle that is a very attractive and safe area but it has not lost its urban grit

It reflects a different approach to regeneration with a mixture of organic and managed development and a strong but open-minded master plan (including the retention of existing potential anti-social uses) it has been developed as a viable and attractive urban neighbourhood. It has been evolving long enough to go through the recycling and repurposing of original buildings. The recent introduction of housing has added a greater number of permanent residents into the valley and they seem to be forming their own community and relationship with the area.

It has a strong neighbourhood feel despite having unclear boundaries, as the topography, the river and street patterns the townscape impact of the three bridges, its excellent pubs, music venues, a city farm, the intentional mix of uses, its industrial history, new innovative housing and, for urbanists, the proximity of the iconic Byker housing, offer a clear central focus.