Charles Montgomery, ‘urban experimentalist’ and author of the book Happy City, was keynote speaker at this year’s Academy Congress. Simon Hicks, who was in the audience, reports back on Montgomery’s embracing talk about his recipe for urban happiness. 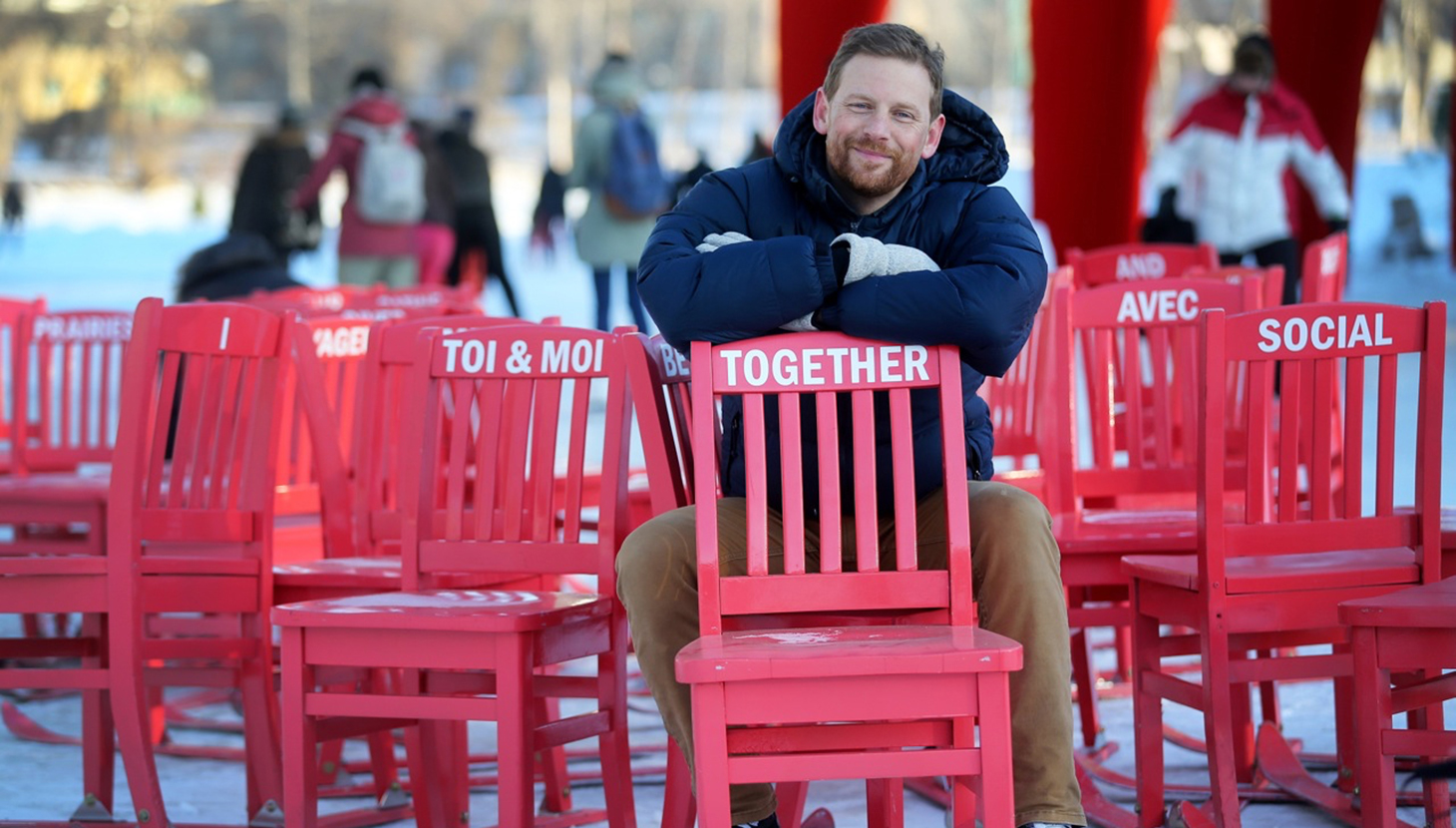 If you’re looking to hug an urbanist, then Charles Montgomery comes with high recommendation. Amongst other things, his keynote at The Academy of Urbanism Congress included a critique of the city planning status quo, a hopeful palette of recommendations to reawaken our urban social vitality, and a post-presentation hug for those most seduced by his proclamations that seamlessly melded science and art into our understanding of the city. To make transparent any potential conflicts of interest, I was certainly one of those who received, and indeed enjoyed, a hug from Charles Montgomery.

Montgomery’s presentation began with a story – a story about an experiment boldly named Love Night. Part author, part scientist, he tempts the audience into his experiment with atmospheric prose and a clenching hypothesis – in a run-down gritty lot in New York City, can we build a machine that builds trust and conviviality? His presented devices for trust-building include hot chocolate, artistic installations that invite (or more often coerce) strangers into unsolicited social interaction, and clothing that changes colour in response to the heat of human touch. Yet as an eccentric but adept scientist, Montgomery offers a concise justification for his seemingly bizarre human experiment – the secret compound, oxytocin.

Oxytocin, states Montgomery, is the chemical that mothers are flooded with post-birth to override feelings of agony with those of trust and happiness. Yet oxytocin is also an everyday drug. We receive a small dose of it every time we develop feelings of trust with a stranger, and it is exactly this administering of happiness through socio-physical chemistry that Montgomery was hoping to reproduce in his urban laboratory. Montgomery proceeds to build dramatic tension by postponing the results of his experiment, yet his core principles are finally revealed – using design and tools that encourage positive interactions between strangers to meet the ultimate goal of making cities happy places. But rather than regurgitating the significant but repeatedly recycled ‘Jacobean’ school of thought, Montgomery builds density into urbanist thought, offering empirical neurochemical evidence for the values of social interaction and the ways we can facilitate it. Rather than reducing chance interactions to the communitarian-utilitarian ends of expanding one’s sphere of interdependence, life chances, or in summary, ‘social capital’, Montgomery reminds us that meeting people on the street will also simply make us more happy in an everyday sort of way. 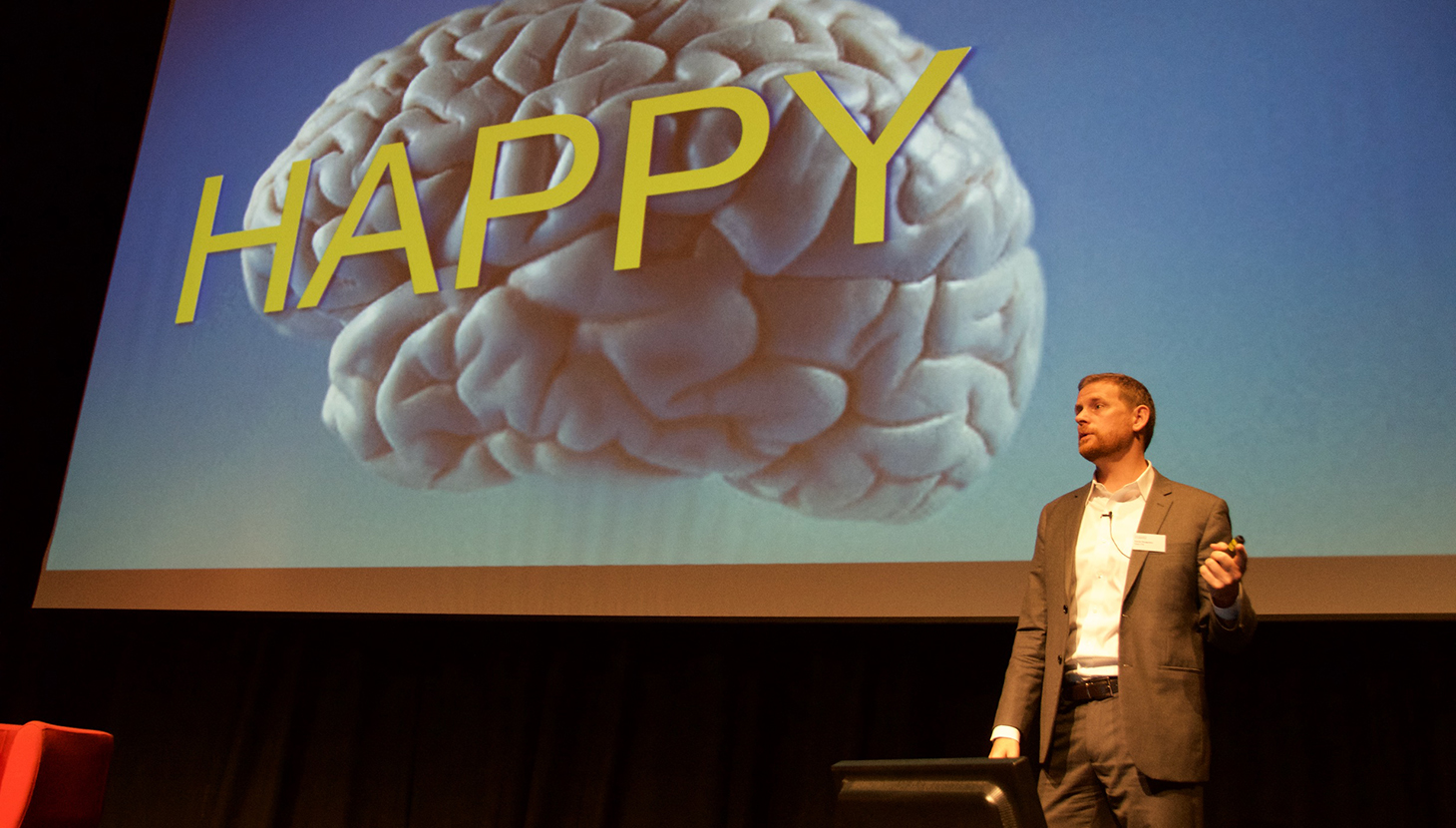 Montgomery takes aim at the utilitarians of the past such as Bentham who have argued that we get happy by buying stuff and boosting our personal status. In turn this has slowly led to a system whereby we predominantly reduce the success of a city to monetary terms. Montgomery instead argues that the ingredients for long-term human happiness are much less condensable, yet equally attainable. Montgomery’s soup of happiness follows this recipe: feeling healthy is more important than being healthy; feeling wealthy is better than being wealthy; self mastery drives us to get through the day; freedom and autonomy grant satisfaction; meaning and belonging bring contentment; and perhaps most pertinently, social ties benefit happiness.

Montgomery offers a cascade of evidence to justify his belief in social ties – socially connected individuals are more productive, less likely to check into hospital, live up to 15 years longer and, of course, report themselves to be happier. Montgomery even warns that disconnection can kill, citing a Chicago heatwave in which deaths were significantly reduced by up to 90per cent in fine-grain urban areas with high social connectivity. Montgomery proceeds to outline the basic ingredients for city design that can positively shape our everyday social interactions. Dispersal, he explains, is key for both a pleasant commuting experience and chance encounters with strangers. In particular, sprawl is an enemy of the happy city. 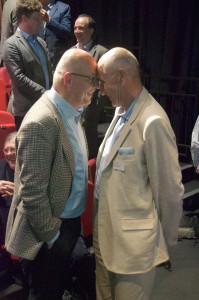 Montgomery further calls upon a cluster of architectural evidence supporting his hypothesis that cities are happier when people bump into their neighbours. He calls upon reports affirming that people demonstrate lower levels of social trust in high-rise towers – even the glitzy options. He calls upon the importance of semi-public space – the liminal zones where neighbours can exchange conversation. Then, in contrast to the isolating effects that technology and densification might have, Montgomery warns that as house sizes become smaller, public spaces play an even bigger role in society. He draws upon another experiment where participants were wired up to machines that measure arousal levels and asked to walk around the Lower East Side of New York City. The findings – that people are most aroused and happy in the jumbled old tenement blocks with small shop frontages and a diverse range of activities. In contrast, big blocks with giant superstores expectedly provided little arousal.

Montgomery then proceeds to alter his trajectory and moves on to his second key line of argument – that happiness and equality are reciprocal. Like before, Montgomery calls upon sources of evidence that suggest status anxiety – or the perception of being worse off – creates stresses that ultimately lead to shorter, less enjoyable lives. That promoting access to the advantages of urban living is also a fundamental ingredient to the happy city. Drawing examples from urban cycling, public transit in Curitiba (Brazil), or public investment in parks and education in Japan, Montgomery provides precedent to his portable phrase – happy cities are equal cities. Perhaps even more encouragingly, these examples demonstrate a global urban movement, albeit in its early phases, to tackle the ingrained challenges of inequity and unhappiness in our cities. 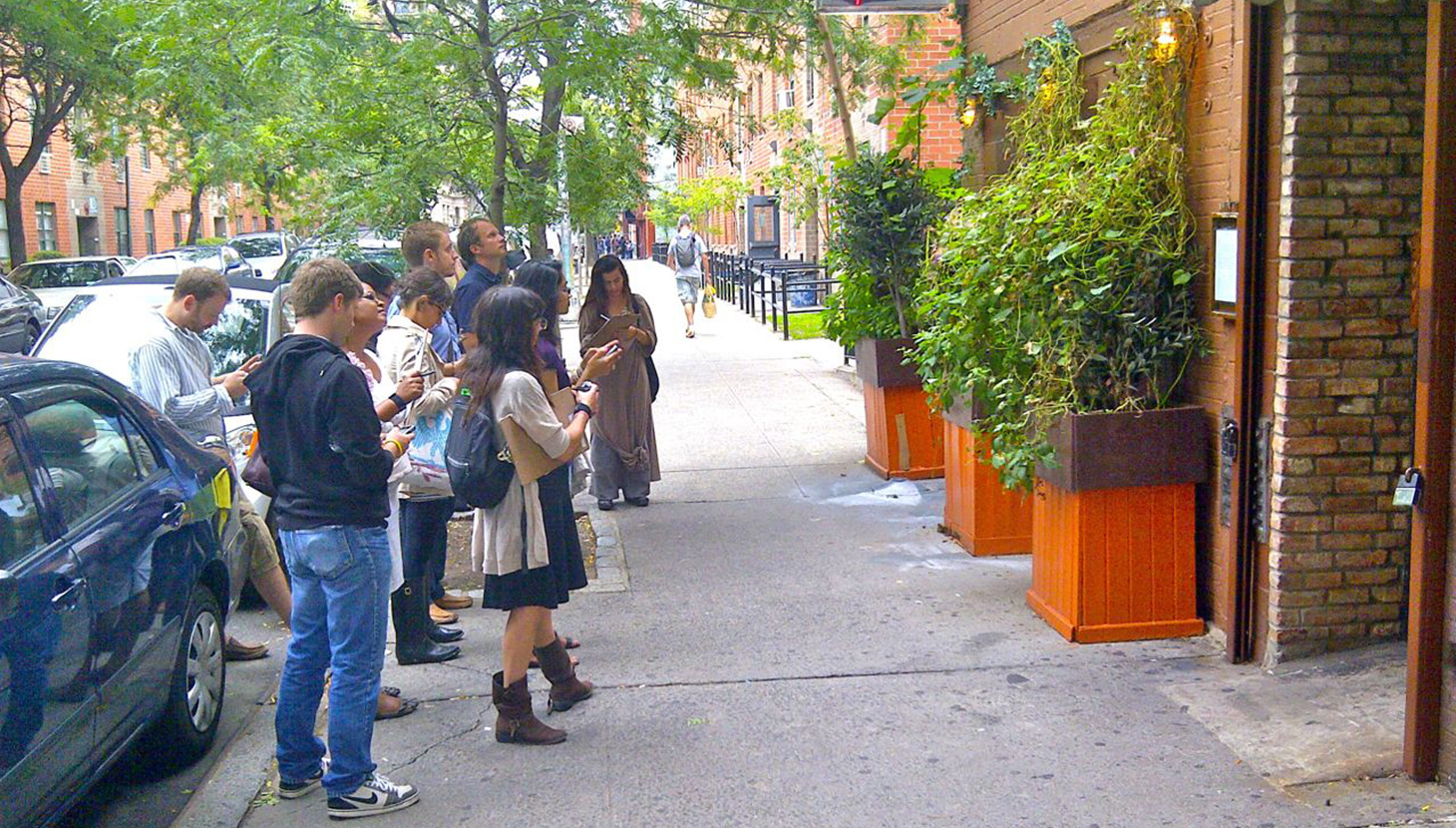 A test group in front of a fine-grained environment that produced more happiness and arousal than a blank street edge. ph. Charles Montgomery

Montgomery does offer some suggestions for the ways we might change ourselves and speed up the process of steering our urban policy towards equality and happiness. He invokes some well-known concepts – community-led small projects in combination with good mayors; invoking the help of more children (in a non-exploitative sort of way), and being cautious about the ‘help’ of engineers. Yet saving the best for last, Montgomery concludes by offering the thought that the solution to creating impetus for happy equal cities is in fact to simply begin designing happy equal cities, or that designing for happiness and equality sets into motion a virtuous cycle of more happiness and equality.

Montgomery’s finale is the conclusion to the Love Night New York experiment. After all the hot chocolate, heat sensitive clothing, and ultimately what was described as a festival of hug-induced oxytocin highs, the experimental findings report that happy people will vote more compassionately for urban policy, with a greater awareness for equality and sustainability. Participants were asked if they would support raising the minimum wage at the start of the experiment and at the end. Pre-hugging, 80 per cent of participants replied no to raising the minimum wage. Post-hugging 90 per cent of participants answered yes. 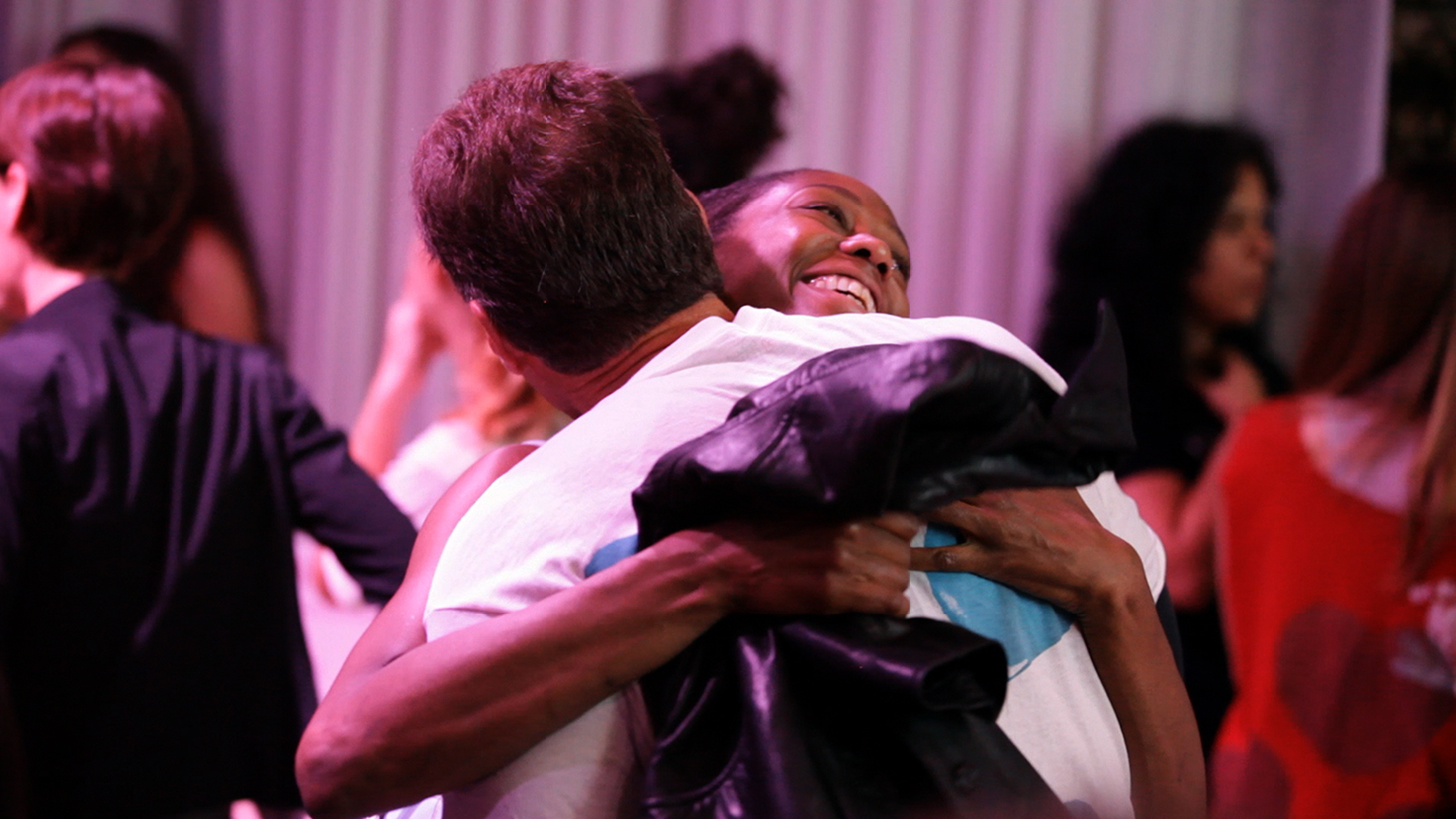 Montgomery offers boundless hope for a happy city that is powered by small everyday pleasures of urban living. We might better learn to appreciate the small moments of interaction, enjoyment, and happenstance experience that our modern cities might offer with great abundance. There is a great optimism that it might be through more social contact that we might challenge big societal issues. There is comfort in the notion that something so simple as friendly conversation, or maybe even a hug, with a neighbour may aid us in challenging urban inequality, isolation and unhappiness. In summary, Charles Montgomery’s work gives us the evidence, the trajectory, and tools we need to realise the happy city. And if you’re still unconvinced that the happy city is a necessary aspiration, I can only suggest you hug the happy urbanist – it certainly worked for me.