Preventable diseases and health inequality are unwittingly being designed into our neighbourhoods according to Rachel Toms, programme lead for Active by Design at Design Council Cabe. Stephen Gallagher speaks to Toms to find out what can be done. 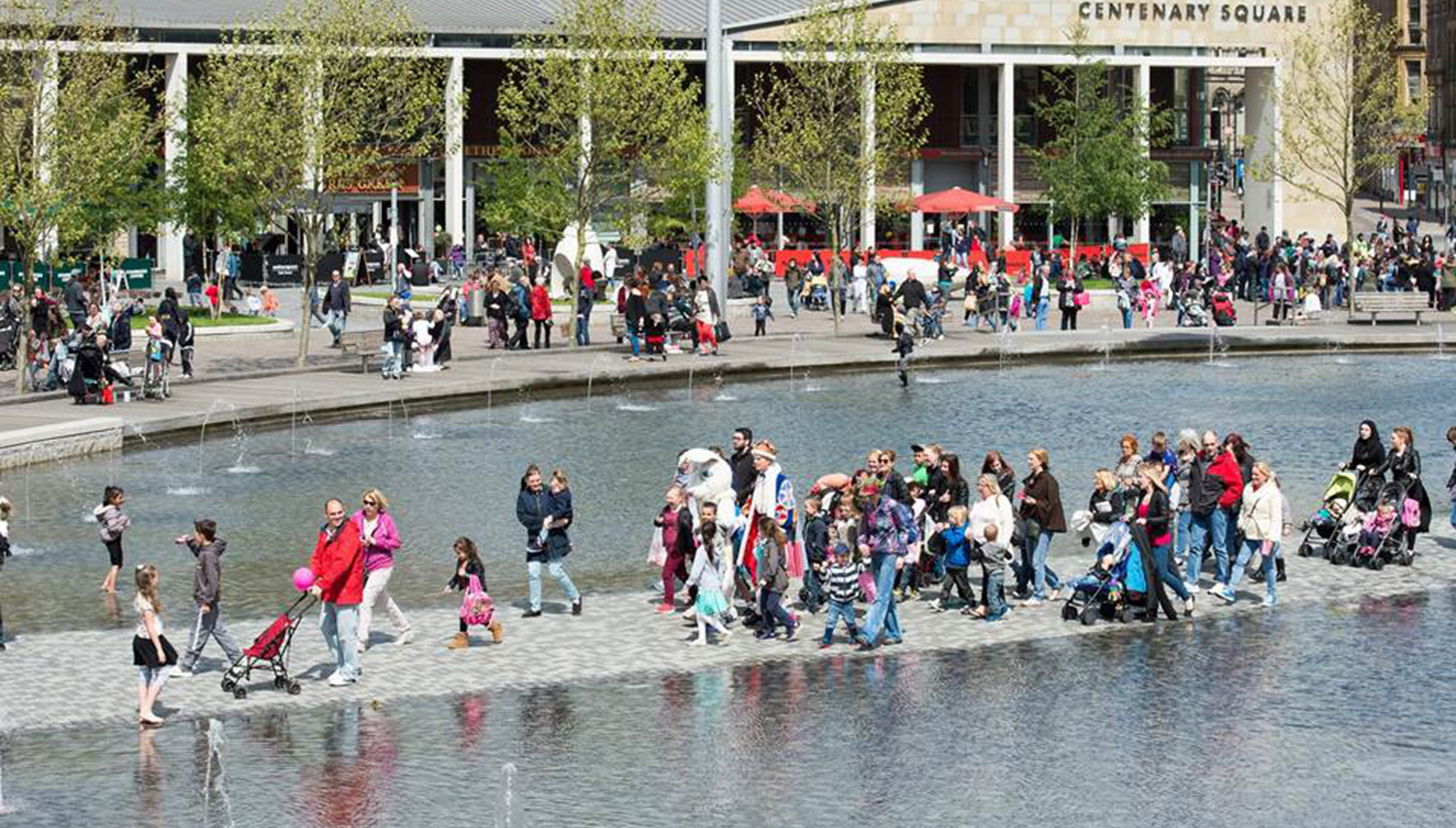 The way in which the lifestyle you choose can help make or break not just your body but also your mind is a realisation that has exploded into public consciousness in recent years. Indeed, in the wake of what seems like a daily flow of articles about the cognitive benefits of cycling, campaigns by celebrity chefs about the dangers of a poor diet and stories of the growing numbers of smokers who are turning to ‘vaping’ for a safe nicotine hit, there won’t be a part of your day left that hasn’t been influenced by those that know better. The result, it is hoped, is that we are making more informed choices about our physical and mental wellbeing. A major report recently published by Public Health England, and which received national press coverage1, seemed to back this up with news that England, after lagging behind like a wheezing smoker, has finally caught up with the life expectancy of its Western neighbours. 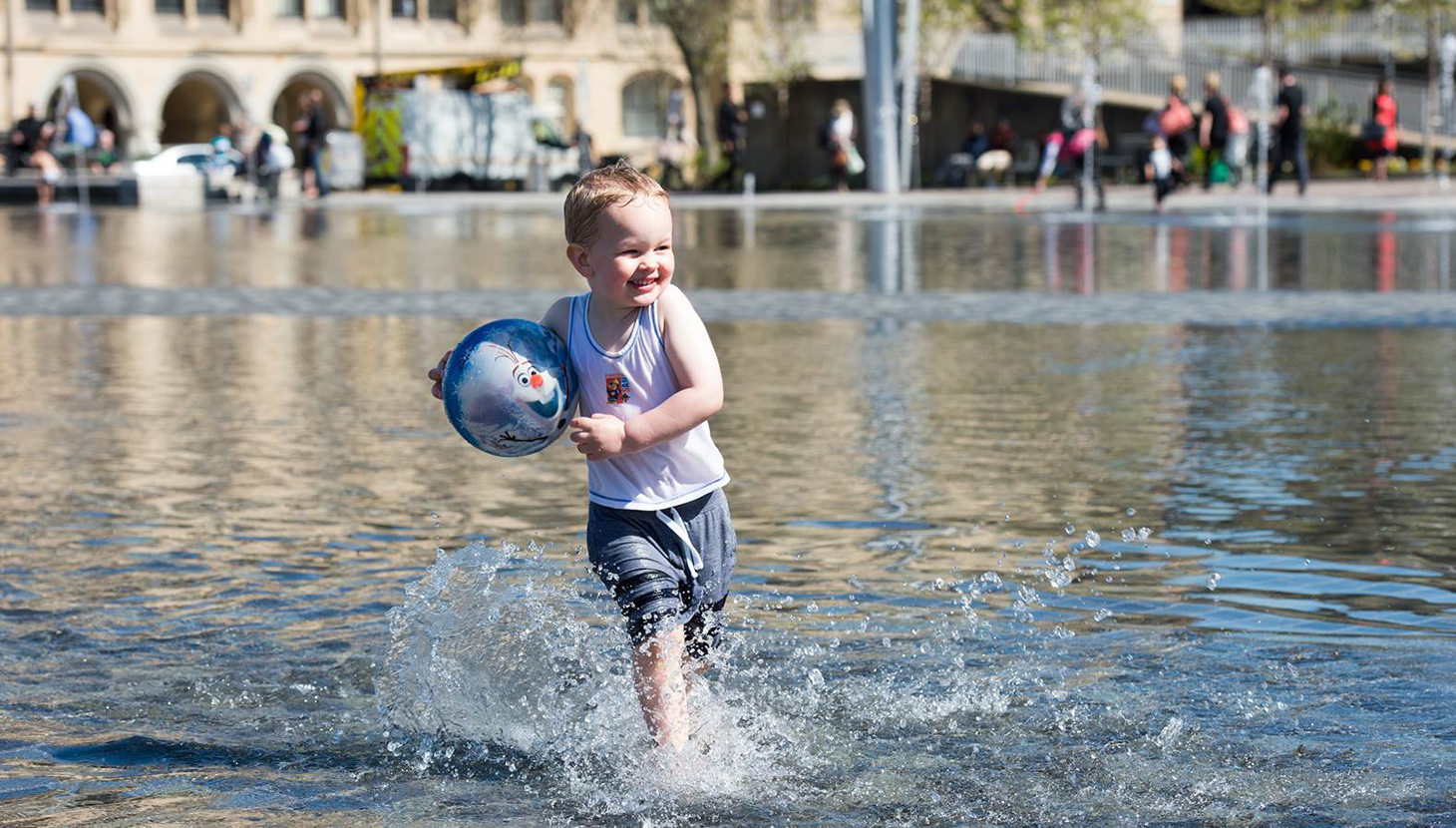 All of which is good, of course. But hold the celebrations. If you dig a little deeper, as pointed out in a recent article by The Telegraph, you will find that the headlines mask some disturbing figures that show that “children growing up in the richest areas of Britain can expect to live a full, active life for as much as 20 years longer than their counterparts in the poorest neighbourhoods2.”

What this means is that, yes, you can live longer than ever before, but unless you can afford the right kinds of foods or the gym membership, or are able to choose to live a pleasant walk away from the shops, you may well find that a healthy lifestyle doesn’t come easily. And this is even before you begin to consider the areas over which your average citizen has no control: enter the built environment.

But as the urban experimentalist Charles Montgomery pointed out in his talk at the recent Academy Congress, your work – Academicians, that’s you – is the single most important in the world. “You’re not just building and shaping cities and communities,” he said, “your work will determine whether people are healthy or sick, whether they are connected or disconnected, whether they are rich or poor.” So, with all of this influence to wield, isn’t it about time for the built environment to get it right?

Rachel Toms, programme lead for Design Council Cabe’s Active by Design initiative, is one of a growing number of urbanists urging her colleagues to take healthy environments more seriously. “Preventable diseases are still a big problem in this country. Over the last century we have successfully designed out infectious diseases from our towns and cities through sanitation and regulation, but we have inadvertently designed in the right conditions for cardio vascular disease, type 2 diabetes, and many other problems associated with physical inactivity,” says Toms.

Having started out in landscape architecture, Toms moved on to design advice and now heads Design Council Cabe’s Active by Design initiative, which champions the creation of healthy buildings, streets, parks and neighbourhoods. Their in-house team and network of 36 Active by Design experts advise local authorities, construction companies and community groups on how to build health into their projects through good design. And according to research, it’s not a moment too soon: physical inactivity, for instance, causes 40 per cent of long-term health conditions and costs the UK economy a staggering £20bn each year, with the NHS spending £900m annually for treating the consequences of a sedentary lifestyle. The rewards for solving this problem are evident not only for our health and wellbeing, but clearly financially, too.

But as Design Council Cabe itself says, there is no single panacea – it will be solved by many simple and practical solutions. “It’s about everyday life in a particular place involving activities and behaviours which are essentially healthy,” Toms says. “This means that walking or cycling to school or to the shops is the first choice because it’s the most straightforward or most the appealing way to get there. That’s what we’re trying to achieve. Not just making healthy behaviours possible, but making them highly desirable, and therefore the natural choice. The point is that, particularly in deprived communities, the best way to increase healthy behaviours is for those activities to be an integral part of people’s everyday lives, rather than an add-on, like choosing to join a gym. So whether you are talking about a home, a school or an office, a street or a neighbourhood, or even a town, we should be designing places in which healthy activities are an integral part of everyday life – with walking at the top of the list.” 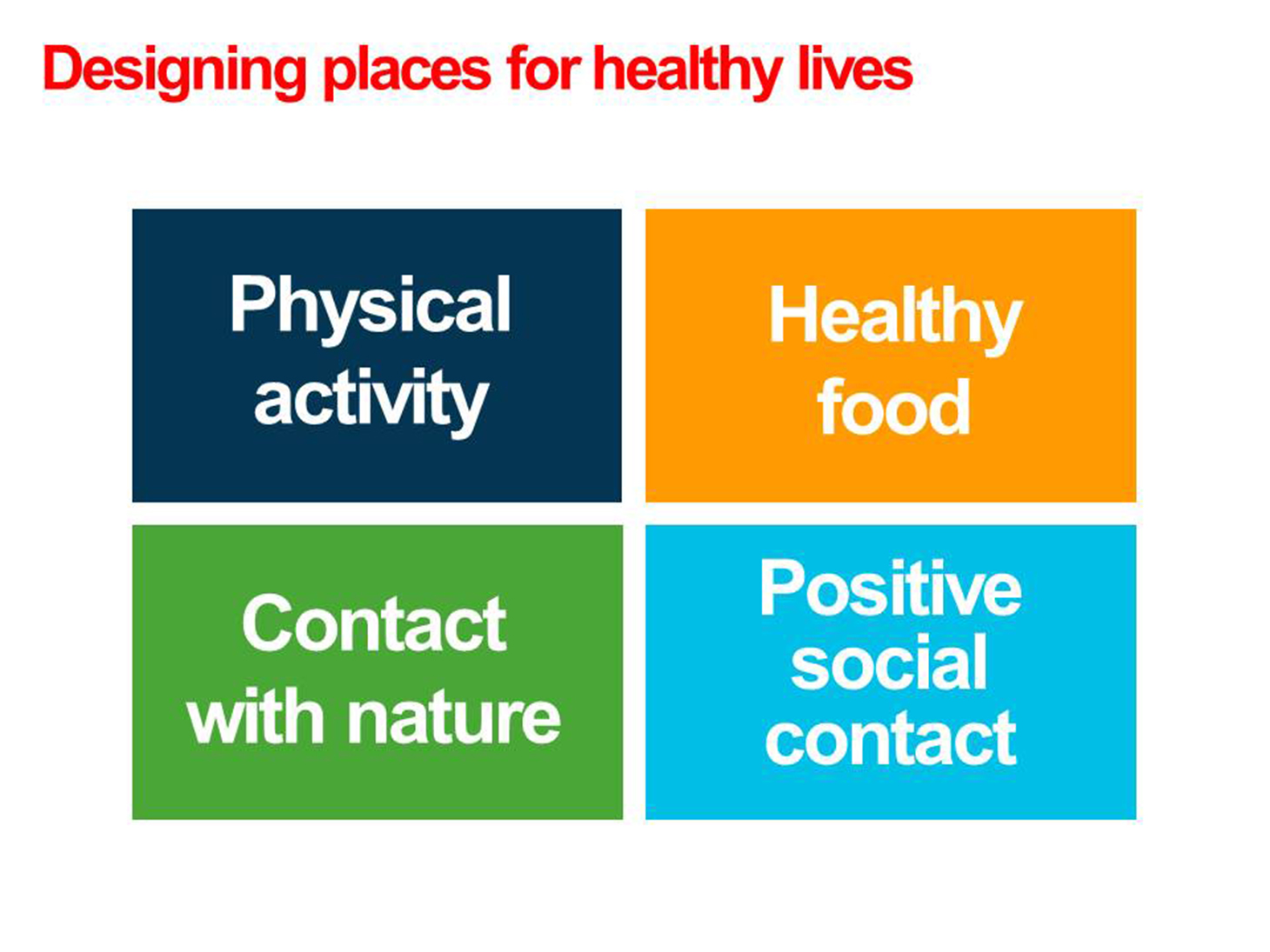 In its work to help developers and local authorities understand the significant challenges that their projects are up against, the Active by Design programme has identified four overarching functions through which health can be built into both new and regenerated places: physical activity, healthy food, positive social contact and contact with nature. For Toms, this is a process of facilitation. “People, to a large extent, are a product of their environment and we [built environment professionals] are creating that environment. There’s very strong evidence linking the four functions to positive health outcomes, both physical and mental,” she argues.

“We can design these functions into places, or we can design them out, and we have experience of doing both! In planning, design and development, house building and regeneration we have to start taking more responsibility for the health consequences of the places we create. Because if we are really going to achieve a change in the way we shape our towns and cities, that probably means not creating urban sprawl on the edge of cities to meet housing demand, it means meeting housing demand in a different way. It also means reshaping our streets so that they are much friendlier to pedestrians, then cyclists, then public transport users. It’s clear that if people’s health is prioritised, then you can end up with a place, a street or a city centre that ticks all of the boxes in terms of quality of life, good environmental performance, and helping the local economy to thrive.”

One example where this type of thinking has been put into action is Bradford’s City Park, a recipient of the Academy’s Great Place award and part of the city’s 20-year regeneration strategy. Design Council Cabe says that the transformation of this previously inhospitable space into an interactive water feature and focal point has encouraged over 150,000 additional trips a year to the city centre, almost all of which have involved physical activity. While the water increases revelers’ contact with nature, the numerous cultural celebrations that take place in this space, which attract up to 10,000 people on site, increase social contact. But most importantly, this is a space that is accessible to everybody. 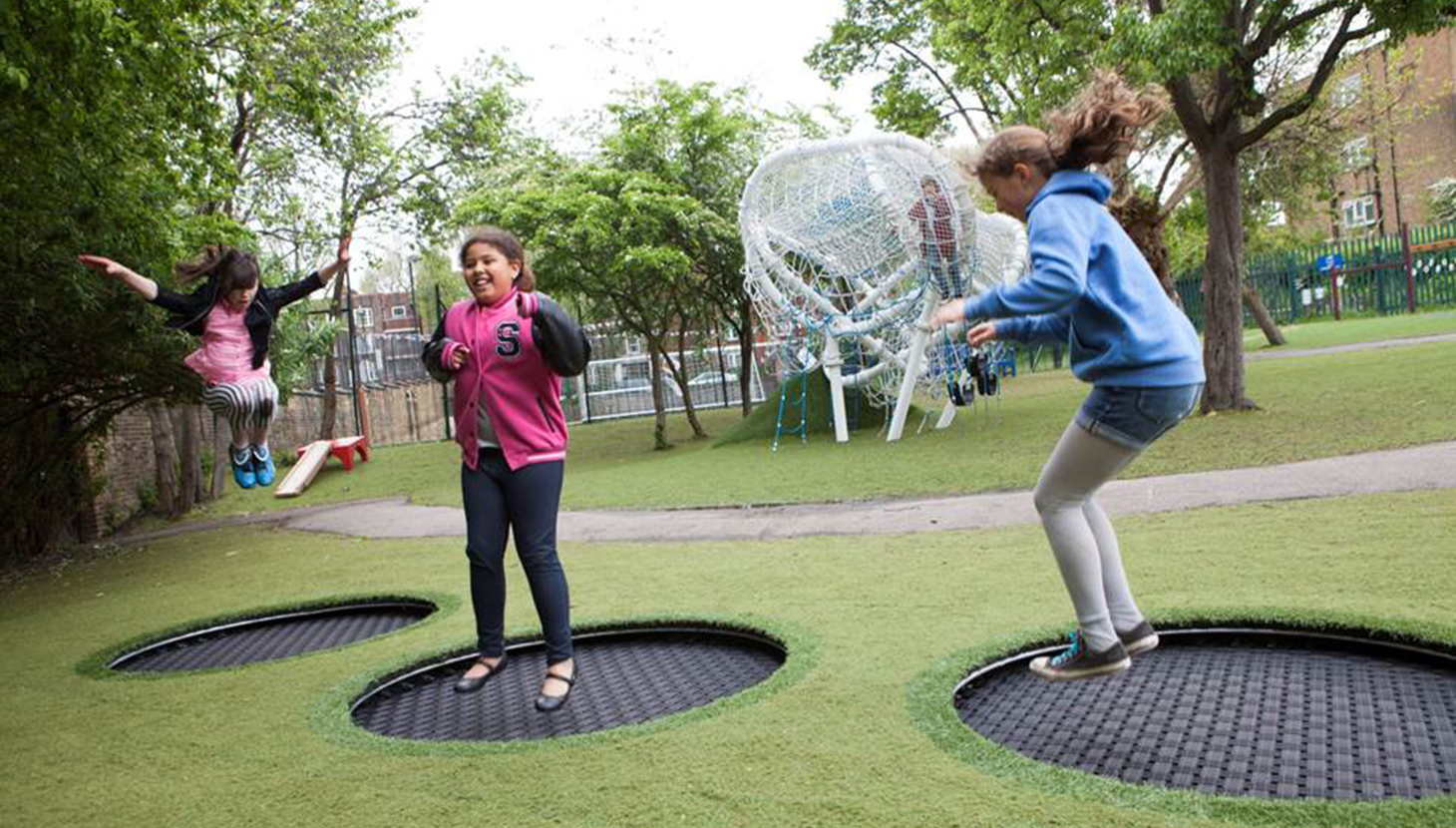 However, there is a long way to go to convince or indeed educate people about the risks posed to their future health from a poorly performing environment. Take healthy food for example. In recent years campaigns by celebrities such as Jamie Oliver about the levels of harmful additives in food have shifted behaviours. But this scale of public awareness simply doesn’t yet exist for the built environment. That said, digging a little deeper beyond the large capital projects there is real progress being made through softer initiatives at a smaller scale. In the city of Stockholm, for example, 66 per cent of people have been tempted away from an escalator and into using one set of stairs by the allure of something fun – musical piano steps. Despite the scale of this project, the important point is that ideas like this can tap into any aspect of your life to shift behaviour.

In the end, how do we really know what works and what the impact of such initiatives is? Toms is quite clear that measuring outcomes for people’s health is something that needs to improve and eventually become matter of course in construction and regeneration projects. “There is significant potential to use local data to measure the effects of building and regeneration projects on people’s health. Local authorities and clinical commissioning groups are already gathering lots of data on health, which I think we should be using as we design the places that people use and inhabit. This is something the built environment professions really need to consider for the future.”

So given that the solutions seem obvious, why aren’t more of our new and regenerated places combating the problem rather than amplifying it? According to Toms, a key part of the solution is leadership. “I think power is dispersed and a little fractured, which is one of the reasons why we end up with ‘business as usual’ housing delivery that often leads to car-orientated sprawl. There is a strong role for leadership, which could come from either national government or local government, or indeed a city mayor. And designers have an important role to play in making healthy activities integral to people’s lives in the places they create. We all need to start talking about what is and what isn’t acceptable for urban growth, or the regeneration of existing towns and cities, in terms of the role of the built environment in influencing people’s health.”