In Summer 1933 a bunch of urbanists sailed from Marseilles to Athens and back. On board they held the fourth Congress of CIAM (Congrès international d’architecture moderne) with the aim of turning the organisation’s focus from architecture to urbanism. In this abridged extract from the chapter ‘Blue Sky Modernists’ in their forthcoming book ‘Climax City’, David Rudlin AoU and Shruti Hemani describe how the British, who were initially sceptical about CIAM, became its most enthusiastic proponents in the post-war years.

When Howard Robertson, the head of the Architectural Association School of Architecture, was asked to organise a delegation to attend CIAM 3 he responded rather sniffily that “we don’t have a modern movement similar to that in Europe” and that “the average English view of what is modern in housing does not correspond with that abroad”. English radicalism in town planning was wrapped up with the garden city and rooted in the Arts and Crafts movement and there was little knowledge or interest of what was happening in Europe (many of the key texts were not available in translation). However, when the invitation came in early 1933 to attend CIAM 4, the architect Wells Coats pulled together a small group who called themselves the Modern Architecture Research Group (MARS).

MARS was a small self-selecting group (membership was by invitation only) which would become very influential amongst UK architects even though at the time it was very much a fringe group. In the late 1930s MARS prepared a radical plan for the reorganisation of London on CIAM principles which was published by the Architectural Review in 1942. The historic core of the city was to be retained within a linear park along the Thames. To the north and south of this, everything was to be cleared and replaced by 16 linear cities stretching along fast transport routes (there was an argument about whether these should be roads or railways) out into the surrounding countryside and bounded by green fingers bringing the countryside back into the heart of the city. The proposals were illustrated as a beautiful set of drawings at nested scales ranging from the structure of the whole conurbation to the layout of each linear city, the organisation of the borough units threaded along the transit routes, down to the individual neighbourhoods and finally the housing units. The latter were conceived as single mega slab blocks accommodating 1,000 people along with local shops and schools, sitting on the northern edge of a park.

The architecture critic Dennis Sharp wrote in his Visual History of Twentieth Century Architecture that the MARS plan for London ‘summed-up, as no other plan did anywhere else in the world at that time, the whole nature of the CIAM approach to a hierarchical structure for a city’. However, in London it was roundly criticised, even from within the ranks of MARS. This was partly because of the way it was presented, appearing to be a serious proposal for the post-war planning of London rather than a provocation or a diagram. It was compared unfavourably with Abercrombie’s County of London Plan published in 1943 that was seen as a much more contextual response to the planning of London, reconciling the efficient functional city proposed by CIAM and the garden city in a particularly English hybrid.

So the early history of modernism in the UK was one of skepticism and CIAM’s ideas (or at least Corbusier’s) were only taken seriously by a small fringe and were dismissed by the mainstream. It therefore takes some explaining to understand how in the decades following the war, modernism would transform British cities to a greater extent than any other country. When Mart Stam, one of CIAM’s key members, presented proposals based on modernist principles for the rebuilding of postwar Dresden he was vilified and his plans described as an ‘all-out attack on the city’. When similar plans were presented for Coventry they were received rapturously, and, while Coventry may have led the way, there wasn’t a British city or medium size town that didn’t seek to replan its centre, reorganise its commercial district and redevelop its outdated housing stock using modernist principles. To understand this, we need to explore the evolution of modernism in the last years of the war and the immediate post war years by a generation of British architects and planners who sought to synthesise CIAM’s ideas with those of Mumford and indeed Ebenezer Howard. 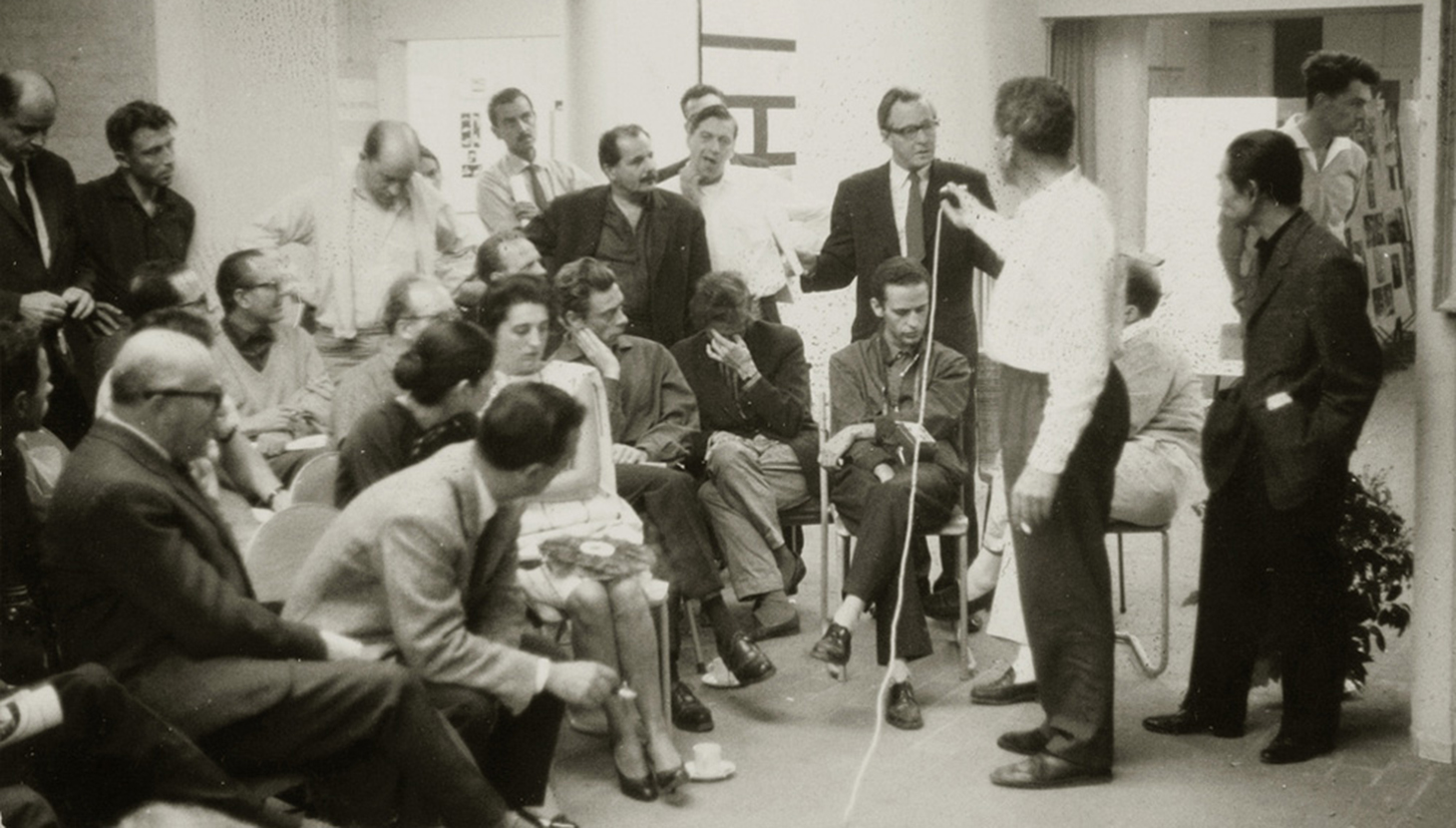 Otterlo Meeting 1959 (also CIAM ‘59), organised by Team 10. The team of 43 participants created a schism within CIAM by challenging its doctrinaire approach to urbanism © Netherlands Architecture Institute

British modernism was to be shaped by two young writers who were working at the Architectural Review in the 1950s, Ian Nairn who was to champion the ‘townscape’ movement and Reyner Banham who was to coin the term ‘Brutalism’. Both set themselves in opposition to the European modernists and indeed to each other. However, the synthesis of the townscape movement and brutalism was to create a very British form of modernism that would dominate planning in the UK for much of the 1950s, 60s and 70s in a way that the purer European version of modernism was not able to do elsewhere.

Both Nairn and Banham were taught by the art and architecture historian Nikolaus Pevsner, who we think of today in terms of his guides to the Buildings of England but in the 1930s was one of the leading promoters of modernism. In 1936 he produced a very influential book entitled Pioneers of the Modern Movement: from William Morris to Walter Gropius which was to lay the foundations for British modernism. In this he draws a line between the work of the English Arts and Crafts movement and the work of German architect Walter Gropius and the Bauhaus, a German art school founded by Gropius in 1919. He argued that “a healthy European life cannot exist in uniformity and regimentation. Should international planning impose an international idiom, nearly all of the visual pleasure would go out of new building”. In doing so, he shared a similar tradition to Mumford in admiring the character and craft of the preindustrial city writing and seeking to inject some of this character into modernism.

Banham was to take up the idea of an English form of modernism, championing the work of architects Peter and Alison Smithson and coining the term ‘Brutalism’ that was to define the architecture of the era. It may have been based on the ‘béton brut’ (smooth surfaced concrete) of Corbusier’s buildings, but it took-on a powerful volumetric quality in council estates, civic centres and shopping precincts of the UK. It would become one of the most vilified architectural movements of all time, largely because of its inappropriate name, but perhaps unfairly as Simon Hensley argues in his book Redefining Brutalism.

Brutalism was featured in a special edition of the Architecture Review (AR) published at the end of 1955, although by this time it was rather out of step with the philosophy of the journal and Banham would move to the rival journal Architectural Design which was to become the champion of the movement. The AR had been converted to a more picturesque approach to town planning and had coined the term ‘Townscape’ in a special edition of the magazine that was credited in leading to the formation of the Civic Trust. Ian Nairn, who became assistant editor in 1954, made his name with the ‘Outrage’ issue published in June 1955. This was a broadside, not against modernism but against the sheer banality of British towns and cities, which had seen the “steamrollering of all individuality of place to one uniform and mediocre pattern”. The edition is illustrated by Gordon Cullen, and bemoaned the shocking state of British towns, dominated by suburban sprawl and destroyed by “wire, lamp posts, signs and adverts”. To describe this, he coined the word ‘Subtopia’ and within days it had been used in a speech by the Duke of Edinburgh and quoted in the House of Commons. 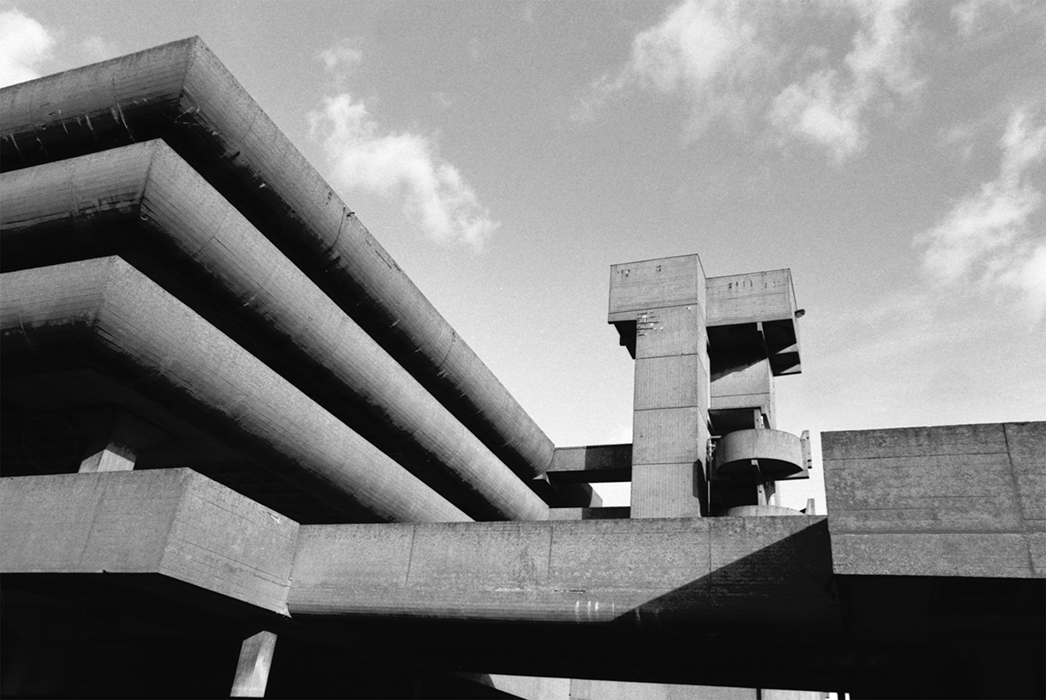 The involvement of Gordon Cullen was significant because it draws a link between Nairn and the modern practice of urban design. Cullen produced his book Townscape in the 1950s, which is better known in its abridged form Concise Townscape published in 1961. This is an illustrated guide to the way in which the local character and identity that Nairn so prized had been incorporated into the cities of the past. Illustrated with Cullen’s beautiful drawings, Townscape creates a language of urban design, describing the character of space and the experience of walking through a traditional city (serial vision) that is still referred to by urban designers today. Most people reading Townscape today would see it as the antithesis of modernism. However, if you look at many of the planning books of the time you will see Cullen-influenced serial vision drawings of some of the most brutal mega structures ever designed. The book Concepts in Urban Design, for example, by David Gosling and Barry Maitland features the authors’ own work from 1970 on Irvine new town in Scotland. A sequential space analysis illustrates the experience of walking through the mega structure that was to form the town centre, running for a mile from the waterfront to the old town centre. Indeed, Cullen himself was involved in many comprehensive redevelopment schemes with multi-level walkways and grade-separated junctions. He argued in Manchester that, from a serial vision perspective, underpasses were superior to bridges because they constrained space and created a more dramatic reveal when opening up into the plaza or square beyond.

This was typical of the very particular kind of dense complex modernism that was to develop in Britain. Rather than the open grasslands of the Radiant City (the Ville Radieuse was a utopian idea created by French-Swiss architect Le Corbusier in 1930) with its widely spaced towns set upon piloti, British modernism was a dense web of walkways, weaving in and out of concrete and glass structures and passing above and below sinuous roads carrying fast flowing traffic. Coventry was only the first of these modern cities. Before long most of the war damaged cities (and some that were damaged very little) were redeveloping along these lines. Newcastle, under its charismatic (and later disgraced) leader T. Dan Smith, was called the ‘Brasillia of the North’. The architecture that dominated these redevelopment schemes may have been brutal but the layouts were pure townscape. Indeed, Nairn praised the Tricorn Centre in Portsmouth designed by architects Owen Luder and Rodney Gordon in the mid-sixties and one of the most extreme examples of brutalism, as ‘a great belly laugh of forms’.

This grey sky modernism of the British Isles was an attempt to jolt cities out of their pre-war muddle that was seen as inefficient and inappropriate for the modern industrial age. The historic cities that the British modernists so valued were being spoiled by the industrial city and were unable to cope with the volume of modern traffic, the needs of modern industry and the necessity to create humane living conditions for the populous. Le Corbusier and the European modernists sought to completely reinvent the city to create something more efficient and civilised. The British, by contrast tried to create a modernism that retained the qualities of space and urbanity found in historic cities but could be built in glass and concrete and made fit for the modern world. Neither succeeded and they certainly didn’t manage to reinvent the city. Nairn’s ‘Subtopia’ had come to characterise most British urban areas and most planners where engaged in the much more prosaic job of making the best of a bad job.

Climax City will be published by RIBA Publishing early in 2018