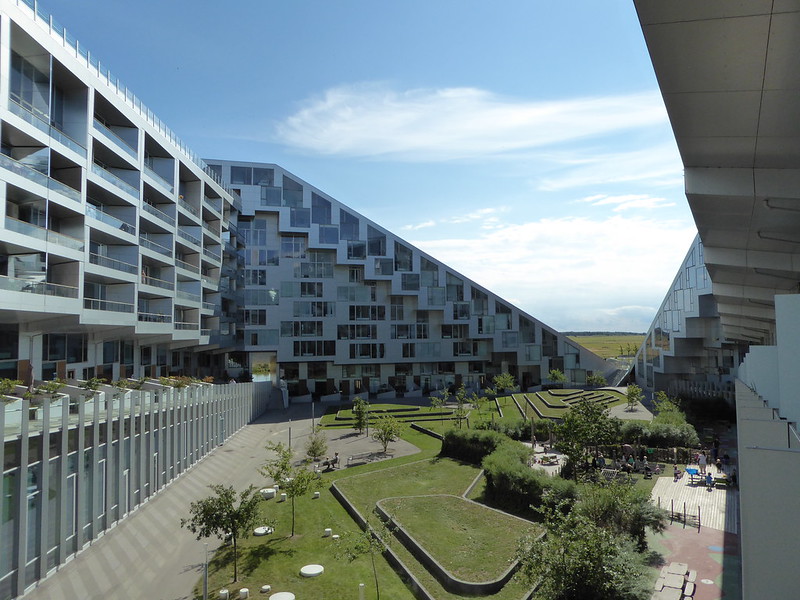 1. Environmental Sustainability and Resilience
Copenhagen is a global exemplar in environmental sustainability and resilience – and not just through its renowned approach to cycling & embedding it as a genuine mode of transport and a natural part of everyday life, but its full-scale neighbourhood climate change initiatives such as St Kjelds Osterbro.

2. Citizens at the heart of decision-making
Copenhagen has a long tradition of political consensus and compromise, but the overriding motive of all politicians at all levels is doing what is best for their citizens & their quality of life – something which was overwhelmingly apparent to the assessment team.

3. High-quality, truly shared space
Copenhagen has over the past 20 years invested significantly in high-quality design to create exemplar living environments, which have an enviably easy interrelationship & hence blurring of what is public, semi-private and private space (which appears to be wholly respected).

4. Reflective and Open Governance
It is very apparent that Copenhagen tried to continuously use ‘ lessons learnt’ from reflection on successive strategic visions and their implementation. Their willingness to look for ideas and best practicefrom other global cities, and work collaboratively on these and re-set city goals, is exemplary.

5. Edginess and ‘Unplanned’ Planning
Copenhagen is acutely aware that whilst it has had great success in planning city development since the 1950s (eg. the ‘Finger Plan’ ) that such tight planning may negate the ability for things to evolve & happen organically – leaving the city feeling a bit ‘safe’ and dull. It is experimenting with trying to leave space for unplanned initiatives to happen without municipal-led intention – which they referred to as ‘edginess’.

Copenhagen is the capital of Denmark, with a municipal population of 591,481; the metropolitan population is just over 2 million. Since July 2000 it has been connected to Malmo in Sweden, only 17 miles away on the other side of the Oresund Strait, by the longest combined road/rail bridge in Europe.The Oresund Region has now become one of Europe’ s new economic growth zones.

Founded in the 10th Century as Viking fishing village, Copenhagen became the capital of Denmark in 1416. It quickly grew and flourished thanks to mercantile activities, with associated cultural growth leading to the founding of the first university in Denmark in 1479. After bouts of fire and plague in the 18th Century the city underwent a renaissance, with major cultural institutions founded and new neighbourhoods developed such as the rococo Frederiksstaden. Following Nelson’ s bombardment of the city in the early 19th century the ‘ Danish Golden Age’ brought a Neoclassical look to its built fabric.

The city was occupied in the Second World War by German Nazi forces until1945. Whilst not badly physically damaged and remaining largely functional, the psychological impact & subsequent refugee crisis left a legacy of strong civic cooperation, resilience and commitment to collective benefit – which then led to the development of a strong welfare state. In 1947 the “The Finger Plan” was introduced in Copenhagen, encouraging the creation of new housing & commercial areas interspersed with five large ‘ green fingers’ along suburban train routes from the city centre. The inadvertent impact of this policy was that the city centre population dropped from 760,000 in the 1950s to 460,000 in the 1990s, as families & young people moved out to the new suburbs.

The city’ s economic strength in the 1960s was driven by manufacturing & industry, sustained by significant labour immigration from SE Europe and SE Asia. The city quickly became vehicle-dominated. A desire to emancipate movement & public space led to the city creating the first pedestrianised central retail street (Strøget) in 1962. This had a positive impact on retail performance and tourist numbers, and so surrounding streets were soon also pedestrianised.

During the 1970s global industrial restructuring, the OPEC energy crisis and the closure of the nearby naval base affected the city badly. Immigration began to be strictly restrained and socio-economic inequity grew geographically within the city, causing social tensions and unrest. Alternative neighbourhoods eg. Christiania began to emerge, promoting alternate ways of civil society. Some parts of the city, eg. Norrebro to the NW of the city centre, saw frequent civil unrest including riots. In the late-1980s the city almost went bankrupt and was put into the administrative control of the central Danish government; to raise funds the municipality had to sell much of its real estate, so owns very little now. The Danish government recognised the country could not be strong without a strong capital, and so invested heavily in key infrastructure such as the Oresund Bridge and early Metro underground stations to stimulate economic growth. This period of social and environmental turmoil had other positive impacts too, with a significant increase in grassroots civic & environmental action and nationally-initiated planning reforms, giving citizens significant direct influence on the city’ s evolving urban form. District Heating Systems – first established in the city in the 1800s – were expanded to counter the OPEC energy crisis. Copenhagen became one of the first cities to understand the value of decontamination of natural assets, with the now-dilapidated port area cleaned in the 1970s as a result of what was then Europe’ s leading environmental legislation.

The focus on clearance of dilapidated industrial areas and densely built-up estates shifted in the 1990s more towards preservation and re-use. Former harbour sites were redeveloped for new business, cultural and residential uses eg. former grain silos at Islandsbrygge were converted to apartments. Investment at the airport at Kastrup created the largest and busiest air transport hub for the whole Nordic region, with associated investment in movement infrastructure eg. expansion of the underground Metro system. Increased collaboration with the city’ s well-regarded HEIs and Business School led to there has been rapid growth in knowledge and science sectors such as IT, pharmaceuticals and clean/green technologies, augmenting its position as one of the major financial and mercantile centres of Northern Europe. There was also investment in cultural institutions too to complement all of this.

The city regularly features in ‘ top 10’ lists of global cities for quality of life, and is an exemplar of environmental sustainability and climate change resilience eg. the neighbourhood-wide plan for Sant Kjelds Osterbro. It was European Green Capital City in 2014. It is renowned for being cycling-friendly, with 45% of all trips to work or school now by bike. The 2010 goal to achieve 20% carbon emission reduction by 2015 was achieved by 2011; the city now aims that by 2025 90% of all residents in new developments will be less than 15 mins walk to a park, green area of usable water body, and less than 5 mins walk from a supermarket (the latter being an interesting insight into food culture!). The city has grown by immigration of 50,000 residents over the past 5 years, including a 33% increase in student population since 2005 alone. The post-war “Finger Plan” states that building permits cannot be granted for any commercial development over 1500 sq m unless it is within 600m of public transportation. More recently the target for development densities was set at a minimum of 110%, with the preferred range 150%-185%.

The city is not without its problems however. Parts of the city still retain the form derived from the car-centric policies of the 1950/60s, with surprisingly high proportions of space still given over to vehicles even though there appears to be little congestion at rush-hour. Some – including the Danish Cycling Federation – feel that the city has a problem with cycling congestion, and that cyclist behaviour is now an issue.

The city also has stark inequality divides between some neighbourhoods, with surprisingly high levels of social exclusion: for example the central Norrebro area remains the poorest neighbourhood in Denmark. There are particular tensions between cultural and ethnic groups in the city, with immigration having risen sharply up the political agenda since the 1990s. The city’ s progressive/permissive attitude (depending on your point of view) to drugs has had the inadvertent effect of attracting drug users from across Denmark and Northern Europe, with the resultant concentration of associated issues such as homelessness and organised crime (some of which is fuelling ethnic and immigration tensions). The municipality is concerned at the city’ s relatively low economic growth, notably compared to cities it sees as its competitors such as Stockholm. It has been focusing on this for the past decade, but concedes it has not yet found the solution and needs to address economic inclusion.

The very high cost of living (especially housing) in Copenhagen is also becoming an issue, notably for younger and/or less well-paid professionals. Whilst the quality of living environments in the city is very high, prices have increased by nearly 50% since 2012, and waiting list for social housing are very long. There is also a shortage of supply as the municipality isn’ t legally allowed to build housing directly, but can’ t always get private developers to develop at the rate needed. This is ameliorated in part by taxation rules (which are applied from the date of planning/change of use consent) but an inadvertent consequence is an increase in smaller (in sq m) living spaces. Demographic projections predict further severe pressures on housing, plus associated areas such as education and health: the city knows in the coming decade they will need to focus on building facilities & services for 16-25 year-olds, as well as improving social & cultural inclusion.