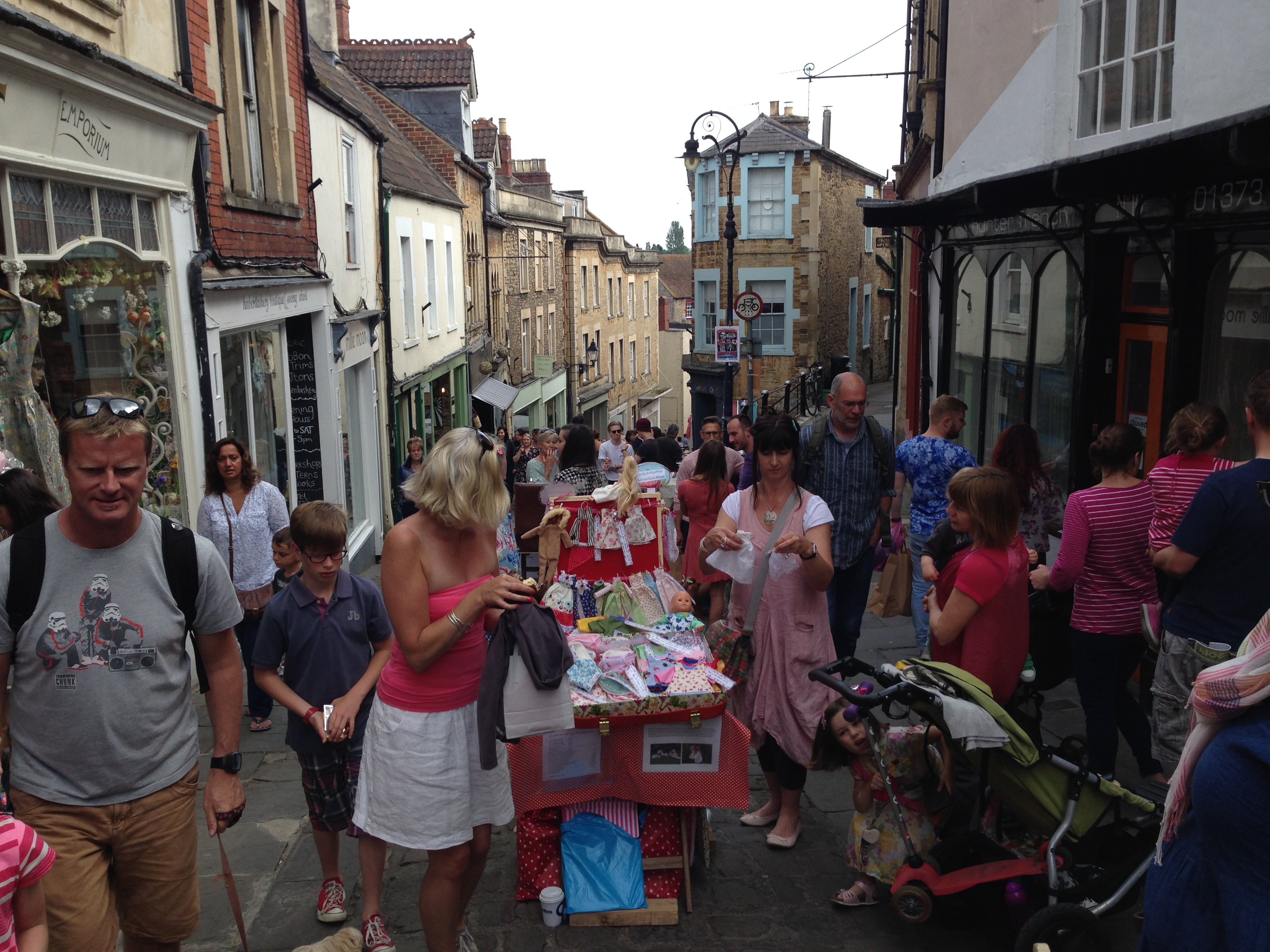 The Young Urbanists descended on Frome over the bank holiday to be greeted by a group of enthusiastic – if slightly delicate – local councillors, still riding on a wave of celebration having swept the board (and with an incredible majority) in the local elections just days earlier. The activities of the Independents for Frome group have been a driving force behind Frome (dubbed the ‘People’s Republic of Frome’ by the Guardian) tentatively asserting itself on the map as a town that does things differently. They were joined by equally enthusiastic officers, who buck the trend of perceived local government apathy.

Frome, a small town of around 26,000 in east Somerset, certainly punches well above its weight. Frome won the Great Town Award in 2016 back in 2016, pipping Margate and Halifax to the post. The assessors recognised the town’s creative use of local funding, the unusual structures of the town council, and the alternative model it proposes to the Big City model.

Our trip started off at the Town Hall itself, which was the first surprise for those of us expecting the drafty, dilapidated town halls more common in our small towns. The Town Hall had been acquired and repurposed in 2017, allowing the Council to move out of cramped town-centre offices. They now share the space with community organisations and a local radio station, allowing for better ad-hoc community consultation than any councillor ‘surgery session’ can.

The morning’s walk-about then followed similar lines to the 2015 Assessment visit. We got the chance to talk to traders on St Catherine’s Hill. A few years ago this was an ailing high street struggling to fight against an out-of-town supermarket built in the 1980s, but has in recent years transformed into a thriving street of independent traders. We spoke to one of the early pioneers, who recounted encouraging stories of young designers from Frome coming back after university to work in her shop and its design collective and workshop, helping to stem the tide of young people leaving for bigger cities. By all accounts the monthly Frome Independent market is going from strength to strength and continues to attract outside visitors and locals en masse. We didn’t spot a single unoccupied unit – quite a coup against a backdrop of gloom-mongering headlines proclaiming the death of the high street.

We moved on to the celebrated Cheese and Grain social enterprise and music venue which, in the modest words of its director, attracts ‘surprisingly good bands’. The Foo Fighters in 2017 the most notorious among them. This is perhaps helped by the proximity to Glastonbury, or perhaps not. Under the hood, the way the renovation came about is an all-too-rare example of proactive and locally-led funding, whereby a subsidy of £35,000 per year paid by the Council to the Trust operating the building was replaced by an investment strategy which saw the Council take on a loan on behalf of the Trust that enabled a £500,000 refurbishment in 2013. The annual loan repayments are less than the original annual grant and the strong revenues the venue has achieved since then attest to a risk that paid off.

They also showed us the recording studio coming together on the upper floors, as well as plans to expand further and offer apprenticeships in sound engineering and other roles in another bid to keep Frome’s young people from leaving town. The studio was also the product of an investment by the Council financed through a Public Works Loan Board loan and matched by Power to Change grant funding.  The loan repayments are in part financed through the ‘feed in tariff’ generated by an earlier investment in solar on the roof (however unfortunately the removal of the ‘feed in tariff’ means that this would likely not be an option today).

The theme of creative reuse continues through the town – Frome’s legacy of ‘boxy’ chapels from its industrial days are easier to convert than the traditional churches. The former United Reformed Church is now a bakery, cafe, community space and gallery while the majestic Rook Lane Chapel has been converted into architects’ offices and a venue that hosts the town’s monthly Architecture Club. 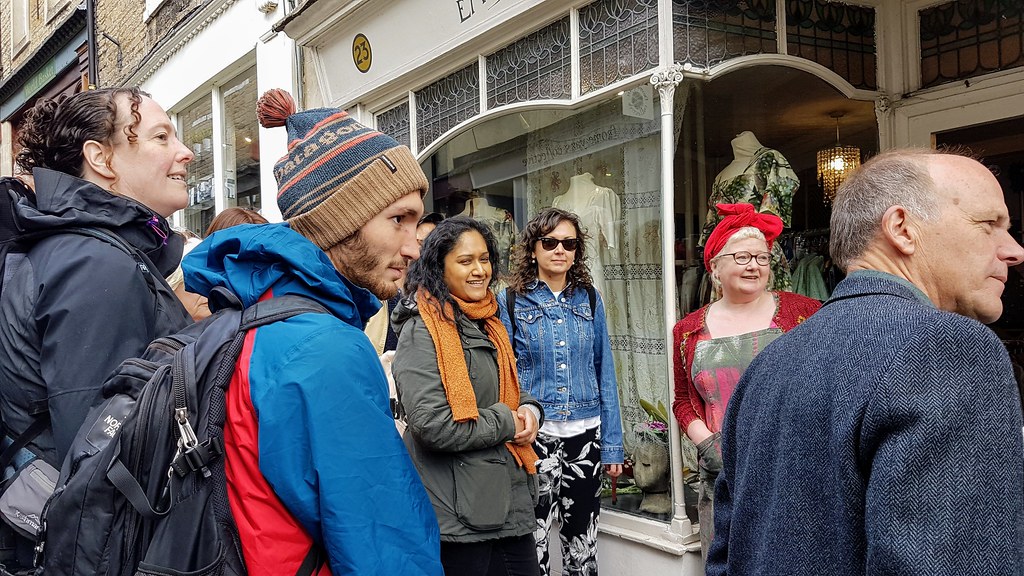 Finally we visited the Saxonvale regeneration site, an unusually large town-centre site seen as Frome’s last opportunity for expansion, but with a long and rocky planning history. Architects from Bath-based Nash Partnership talked us through the plans (currently at outline planning stage) which strike as a refreshing departure from the usual cul-de-sac approach to housing in small towns, aided by the support of a developer seemingly willing to take a few risks. One battle they have been fighting is gathering all the evidence necessary to challenge the local Highways authority to take account of future car use patterns, the expansion of car clubs and e-bike use. Tension also exists between the town’s need to optimise workspace provision and the developer’s tendency to favour more profitable residential development. All that remains now is to shepherd the scheme through planning without any of these intentions being watered down.

Since the original assessment visit in 2015, Frome seems to have kept up its momentum. Clearly, the recent election wins have done much to validate the direction of travel of Frome’s councillors. Over a tough few years for big-name high street closures, Frome’s thriving independent traders seem to be evidence of the greater resilience that smaller-scale retailing can provide. It was also heartening to see that the town’s Neighbourhood Plan, adopted in 2016 and woven through with ‘One Planet’ principles, seems to have left a real imprint (despite wider concern over how much ‘bite’ these new tools have) and set a standard for local aspirations. The Frome experiment has certainly been testing the limits of the ‘localist’ agenda from the outset.

There is a strong commitment to sustainability in Frome, not only when it comes to energy usage, but also concerns over embodied carbon and rethinking consumption habits. ‘Share’ is Frome’s ‘‘library of things’, where locals can borrow anything from projectors to wallpaper steamers – it stems from a recognition that the average drill is used for only 13 minutes in its lifetime. Shared tool sheds have also been floated as ideas to incorporate into new development.

Of course the town continues to face a number of challenges. Inevitably, there is the ongoing challenge to make sure that all feel included in the success story they are reading about in the papers, even in the town’s most deprived areas. Defending one of the town’s less glossy buildings, the former councillor Pippa Goldfinger reminded us of the need to make sure the ‘grit in the oyster’ is not wiped out in Frome.

A programme of community work centred around community gardening and greening is making good progress and benefits from a clearly dedicated local officer. But the efforts could do with more help from local Housing Associations, whose attentions appear to be elsewhere as they balloon in scale and are shouldered with more development pressures, distancing them from local communities.

Despite the progress of the town’s Co-wheels Car Club, the problem of congestion also remains a thorny one, with parts of the town’s narrow central streets still overwhelmed by cars and instances of suspect driving behaviour. Public realm works (pedestrian crossings, realignment of bus bays, and safety features that take more account of obvious desire lines) are a step in the right direction. And public transport in rural areas like Somerset are always an obstacle – however there is hope that a new co-operatively run Go-Op service might help to increase frequency of rail service to the town. Safeguarding employment space in planning policies is also proving to be an uphill struggle.

It occurred to many of us sitting in Frome that one of the major priorities should be getting the word out to other small towns across the UK. Templates for doing things differently are crucial in bolstering bold action. The towns’ Community Development Manager told us that the local community’s initial aspirations for Frome were to create a copy of the (largely chain) stores available in nearby town Trowbridge, because that was the local benchmark. Had that nearby town been Hebden Bridge (another AoU Award winner), she wondered, would those aspirations have been different?

Some other UK towns, like Buckfastleigh in Devon, have imitated the ‘flatpack democracy’ model born in Frome. But there are more that could use the chance to learn. Skimming through a data set put together by the Centre for Towns, in terms of size Frome sits in between similar-sized towns in other regions including Salford in the North West, Ashington in the north-east, and Pontypool in Wales – all of which are struggling to keep their town centres alive. Or could the model be scaled up to larger places? The precise tack taken in Frome is unlikely to work for everyone, and the strategy certainly brings its own problems – the affordability and inclusiveness challenges that come with success are foremost among them. But Frome does present a crucible of ideas to test out, and could bring some fresh thinking to the towns that often find themselves crowded out by a focus on the brighter lights of our bigger cities.

Frome Town Council is keen to share their experience with others and host other groups. If you are interested in organising a trip to Frome, please get in touch with Peter Wheelhouse, Deputy Town Clerk at wheelhousep@frometowncouncil.gov.uk

This report was written by Young Urbanist Lucy Wallwork.